Ingrid and her mum came down to visit so little birding was done, but we called in to Cuckmere Haven briefly. Ingrid and Tina wanted to catch a glimpse of the sunset so rushed down to the beach while I had a look across the floodplain. A Peregrine, a Rock Pipit, two Kingfishers, a couple of Little Egrets, a few Wigeon and Redshanks were the highlights. I'm off to Thailand tomorrow evening, so over and out for now!

Another bright sunshiny day at the local patch. This time I was joined by Duncan J and Geoff B in the hope of finding that elusive hundredth species for the collective recording area year list but we had a fairly 'average' day with small groups of both Siskin and redpoll being the highlights. 'Buzz' the tame juvenile Common Buzzard was as obliging as ever... I made a trip into Sutton, where one of the Peregrines was showing on the western face of Quadrant House and then returned for a brief evening visit to the farm where Phil W and I enjoyed twilight views of both of the resident Barn Owls.

Doing the rounds at the farm resulted in a couple of surprises, namely a Chiffchaff on the edge of the horse paddock by Pages Acre and a fly-over Grey Wagtail. A Lesser Redpoll seen in the treetops in Pages Acre also goes in my logbook as a noteworthy sighting as they remain frustratingly thin on the ground locally this autumn. I was disappointed that the Forster's Tern had not reappeared in Kent, but news from Frensham Great Pond had Paul S and I heading over there in the afternoon to track down a Surrey lifer. We teamed up with Paul M and John B to scan the main section of the lake, initially finding nothing more curious than the outdoor swimmers, but we soon locked onto a strange, superficially black-and-white form floating near the far shore. It was no rare duck, but had it been on the sea I would have had no hesitation in calling it a (ex-)Guillemot and after staring at it for 10 minutes or so I could see no reason to doubt this identification, however bizarre it seemed; it did not seem the right size nor shape for a Razorbill and was not quite black enough on the upperparts. An adult drake hybrid Aythya was snoozing among 62 Pochards but once it became clear that our quarry was not in this part of the lake, we moved towards the Frensham Pond Hotel, which the last report referred to, where Paul quickly locked onto the juvenile Long-tailed Duck. A frequent diver and remaining under the surface for perhaps 45 seconds on each dive, it did not allow prolonged viewing or convenient photography but was an entertaining bird. Eventually, it flew off towards the main section of the lake with four Tufted Ducks.

An early start at Canons Farm was greeted with more fog than birds. I teamed up with Darragh C and once more we found that the most interest was in Banstead Woods; six Siskins was as unusual as things got but it was a pleasure, as always, to see a good number and variety of common woodland birds (though no large mixed flocks seem to have formed yet). My plan was to head off to Folkestone for the Forster's Tern once I got back to the car but once I'd sorted myself out it looked as though I'd have half an hour of light to work with, at best, so perhaps I'll go tomorrow.

A catch-up with Duncan J led us around the patch, which was productive in Banstead Woods for a female Brambling, three Siskins (entertaining to watch as they drank from a hollow in a tree!) a Lesser Redpoll and two Stonechats. After not really seeing the sun for the last few days, a completely cloudless sky by the early afternoon made for a welcome change. 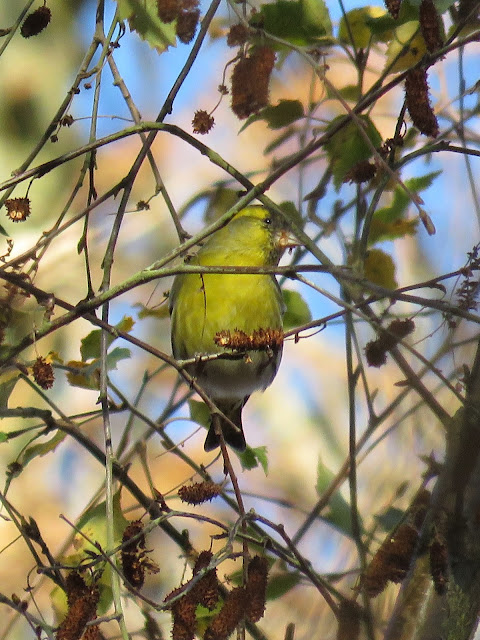 A whizz around with Geoff B produced some interest with a Siskin feeding in the trees at Banstead Woods and a redpoll overhead. Linnets seemed to have increased to around 500 birds and the celebrity Common Buzzard provided a close encounter as we walked back to our cars. 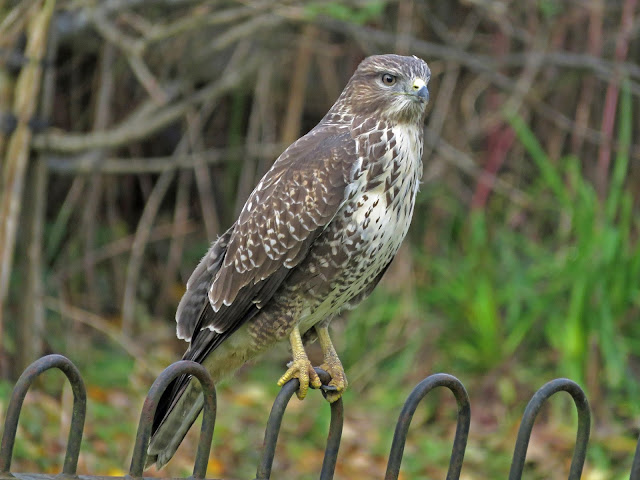 I started fairly early on at Canons Farm, which yielded little of note, before heading to Beddington Farmlands to do the rounds there with Christian C. The highlights of an enjoyable three hours or so were at least four Water Pipits, a first-winter Caspian Gull, a calling Cetti's Warbler, a few Common Snipe and a couple of Stonechats. A vocal Bullfinch, an uncommon bird there, was a bonus. I was amazed by how much the water level had risen since my last visit a couple of weeks ago, submerging much of the islands (surely a decent duck is due here soon?) and the incinerator seemed to have come along in its brutal gestation. Returning to Canons in the evening, I was joined by Jack B in a vain attempt to see the Barn Owls but a couple of the local Little Owls were yelping away.

Another walk around on a rather grotty day produced relatively little, though one of the wintering Meadow Pipits was calling and a total of 14 Rooks was a surprise.

I didn't fancy heading out for Storm Angus's final proceedings so waited till the afternoon to head to the patch. One of the first birds to greet me was a Red Kite drifting over and later on a redpoll rattled overhead. The whole afternoon felt like a perpetual dusk but I joined Paul G for an evening vigil which was rewarded by a wonderful performance from not one but two Barn Owls!

I spent the morning with IGM, trying to track down the Firecrests as he still needed it for his CFBW list, and we succeeded in briefly locating one in Pages Acre before it skipped over to Ruffett Wood. Two Siskins flying over was an added bonus, as was a grounded Lesser Black-backed Gull seen later on as I walked back to the car with Qasim S.

A pleasant walk around the patch with Geoff B was quite productive, with two Firecrests (male and female) performing well along the edge of Pages Acre, a redpoll and two Mallards overhead and a heard-only Brambling in Banstead Woods. The Firecrests make for the first multiple-bird record of this seemingly increasingly regular patch scarcity.

A non-birding day, though while in Sutton I did catch sight of one of the local Peregrines on Quadrant House.

An explore around the Sandwich Bay estate made for a relaxing afternoon mainly spent admiring the gathering of Teal on Restharrow Scrape, where I counted at least 700. Two Green Sandpipers and four Common Snipe were also on view there.

Once again, with my shift wrapped up I rushed out to stretch my legs and catch up with the Barn Owl, which eventually put in a ghostly appearance 20 minutes later than it did yesterday, despite the cloud cover. Four Little Owls were heard calling.

Once I finished work this afternoon I picked up Phil W and headed out to the farm for another owl session. At 16:55, the Barn Owl emerged and hunted over the grassland at Horse Pasture before vanishing into the twilight. At least six Little Owls were heard calling and a small number of Fieldfares and Redwings excitedly flew around the farm.

I've said it before and failed but once again I'm going to give online logkeeping a go and try to keep it up this time! I've spent the last eight months as Assistant Warden at Dungeness, which was a valuable experience, and I'm now enjoying reacquainting with my local patches back in Surrey.

On Wednesday, I joined Christian C, Roger B and Kevin G on a gloomy morning in the hide at Beddington Farmlands. This winter will be the last that the landfill operates so an eye was kept on the larids, producing two first-winter Caspian Gulls, one of which was particularly striking. Once the rain gave in mid-morning, Christian and I headed off for a walk around the mound, where a soft grating call alerted us to the presence of a Dartford Warbler, which we soon tracked down.


Thursday saw me eagerly return to Canons Farm, where I convened with Paul G and Ian J and also covered parts of Banstead Woods. A heard-only Reed Bunting overhead was quite a surprise and other decent patch birds included two Stonechats, a Cormorant and a Grey Heron. I went out again at dusk, and was glad I did as I heard six Little Owls, a Tawny Owl and a Barn Owl.


A bitter wind did not stop a trip to north Kent with Josh B today being a good laugh. We started at Leysdown-on-Sea, where a single adult Mediterranean Gull was the only bird of any note before moving on to Shell Ness, failing to locate anything unusual but enjoying a panoply of typical waders and wildfowl. After a pit stop, we called by at Oare Marshes, where we only had time for a fleeting check of the East Flood but managed to see a Little Stint and 14 Ruff, but best of all was a close encounter with a ringtail Hen Harrier as it quartered the marsh.