My recent bad luck took a massive u-turn this weekend, which began with a successful after-school twitch for a Red-footed Falcon on Friday, before a 'family' weekend in Norfolk.

After arriving late on Saturday, dad agreed to take me to a couple of places in the Fakenham area while my gran spent some time with my uncle on Sunday. 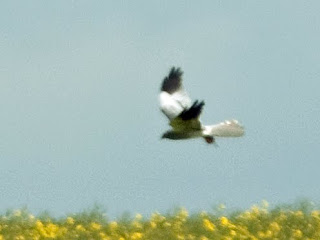 Five minutes after being dropped off at the first site (which I won't disclose even though everybody seems to know about it) I was onto the male Montagu's Harrier as it quartered a nearby field, before disappearing over the brow. The exquisite bird showed on-and-off for the hour and a half that I was there, at times offering brilliant views, though my photography skills don't reflect that. Also present was a singing male Lesser Whitethroat and a male Marsh Harrier. 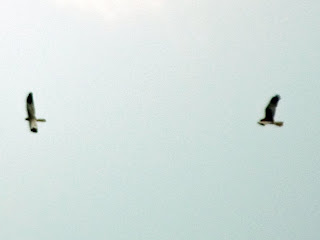 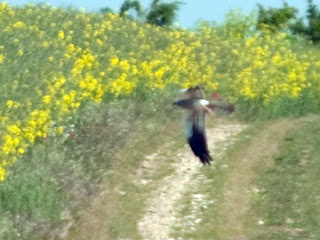 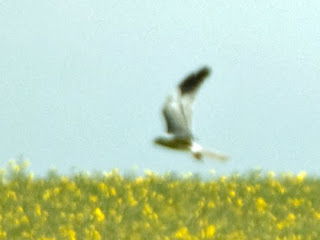 Next was Great Ryburgh Raptor Watchpoint (nearly running over a Grey Partridge on the way there) where a brief attempt to see Honey-buzzards was soon realised to be doomed to failure, for one thing it was a little too windy for the birds to be displaying and, more importantly, there weren't any birds; the team of volunteers at both Great Ryburgh and Swanton had put in about 200 hours this spring and not glimpsed a single bird.

With Lakenheath too far away to do that day, especially with family plans, dad dropped me off at Cley NWT for some quieter birding, and perhaps to see if the Temminck's Stint was still around. There wasn't anything of great interest, just a hail shower. The most interesting birds for me were the Avocets with their young chicks, the good numbers of Black-tailed Godwits, a male Marsh Harrier and one or two Bearded Tits.

Monday saw my parents and I up a bit earlier; we planned to fit in a trip to Lakenheath before having lunch with my uncle and his girlfriend, then heading home.

The predicted 'white cloud' decided it would rather turn grey and constantly drizzle over us on the way there, which didn't give me good feelings about seeing the Golden Orioles. However, on arrival at the visitor centre the staff reassured me that the birds had been showing despite the weather and I had a decent chance of seeing them. 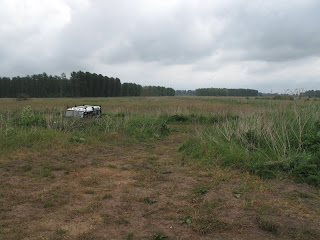 After staking out the 'last plantation' for about twenty minutes, I spotted a flash of yellow low down and got onto it in the scope. The yellow thing flew towards me and confirmed its identity as a male Golden Oriole. I announced the sighting and after it disappeared a huge throng of people descended around me asking me where it was, if it was the male etc, very off-putting. I spotted the bird half-hidden behind the trunk of a tree again but by the time I got onto it with the scope it had flown deeper in and I didn't bother announcing it.

After waiting about twenty more minutes, the bird apparently flew up from the ground at the edge of the plantation and gave good but partially obscured views for all present for a minute or two before disappearing again, satisfied, I had a very brief look from the Joist Fen Viewpoint where a Bittern boomed at close quarters and at least 5 Marsh Harriers were on show.

Other birds here included 2 or so Cuckoos including one flying low overhead, a Kingfisher, at least one Bearded Tit and at least one Water Rail squeeling.

Half an hour late for pick-up we had to rush back to meet the others for lunch and couldn't check out a nearby Stone-curlew site which I had been tipped off about, thanks Joe for the info though.

It had to happen . . . while we were having lunch by the river the pager sounded the monotonous, continuous beep which indicates a breaking rarity, and by sod's law it had to be in Norfolk at an awkward time. But, it all turned out well. 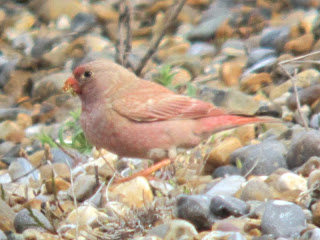 Surprisingly, dad was happy to take the detour to Cley on the way back home and even more to my surprise mum and gran were too (very odd). To my delight, the male TRUMPETER FINCH was still there and showing well when I arrived. I've always wanted to see one of these and it was a performer, coming pretty close at times (even more so to a group who had luckily positioned themselves where the bird happened to wander towards, along the top of the shingle ridge). This is the 15th British record if accepted. 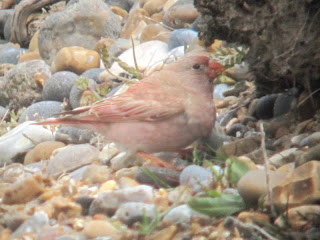 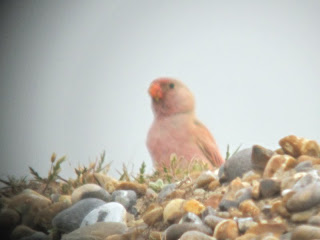 While the bird wasn't on show, I turned to the sea and got good views of a pair of Arctic Terns moving west close to the shore, they were close enough to clearly see their short, all dark-red bills and greyer underparts as well as all other features.

The Avocets and Black-tailed Godwits, a Sandwich Tern and a Bearded Tit were the most notable over birds. I watched the finch for an hour and a half, before having to get back in the car and go home after a brlliant weekend's birding for which thanks is due to dad.

If you've wondered why I haven't posted in 3 or so weeks it's because there has been virtually NOTHING to write about. 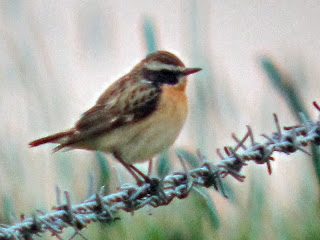 Whinchat at Canons Farm; one of the only highlights over the past weeks, even this wasn't new in any way

I've been on one or two minor twitches and failed and done a lot of patch watching for little reward while my Canon colleagues have been getting some good birds.

Finding another Whinchat and a couple of Red Kites at Canons have been the biggest highs over the past weeks as well as stumbling upon a nice pair of Nightingales while dipping in Sussex, but there has certainly been nothing to write home about.

I suppose the most interesting thing has been this female White Wagtail at Canons Farm which has paired up with a male yarrellii and because of its daily routine I guess is probably on eggs. 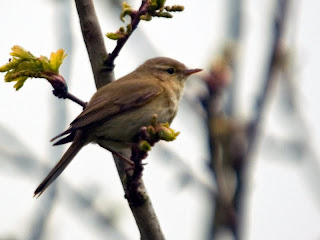 Dad gratiously agreed to spend his free Saturday afternoon trucking Kev and I around Kent today, and we scored a 2/3 hit rate. First on the agenda was Walderslade for the male IBERIAN CHIFFCHAFF which showed very well, revealing its subtle plumage differences, and sang its distinctive song; it was quite an easy twitch. If this, and others since 2008 are accepted, I think this would be something like the 18th record for Britain. 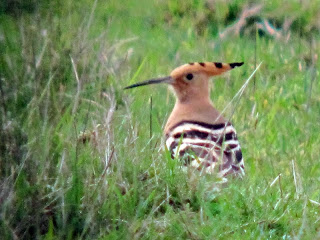 After enjoying this bird for about 40 minutes (would have liked more but the outing was later in the day than normal) we made our way to Lenham Heath for our next target. There was negative news upon arrival, after a false-alarm run-around the Hoopoe was eventually relocated and good views were had by all.

News of a Woodchat Shrike at Reculver broke and I persuaded dad to go, but we had to leave right then. After confusion in finding the right place, we eventually found the right area, it then took us a fair amount of time to work out exactly where the bird was meant to be (though there were some rumours going around that people were being a bit dodgy about the exact location for one reason or another).

We stayed a while and scanned with a handful of other birders but some had extensively searched the area over the past couple of hours and the bird had obviously moved on; we kept scanning though, just in case, and enjoyed a pair of Marsh Harriers and the songs of 2 Sedge Warblers and a Reed Warbler.

Two British ticks in one day is always good, and the Chiffchaff was a lifer full stop, so I can't complain; it was a good day. Thanks to my long-suffering dad for spending his free afternoon taking us around.