This week and next week

Highlights this week have included the attached female Black Redstart at Canons Farm plus the Bittern at Beddington. Off to Scotland 4am in the morning till Friday - will post about it next week!

I got a text from Kevin Hazlegrove this afternoon saying that he'd had a female-type Black Redstart at Canons Farm, between the farmhouse and Legal & General. I made my way over there and quickly found a male Black Redstart on and around the barns near the farmhouse! Seemed as if there were two birds, then, but Kevin later said that his sighting was naked eye only and it was possible that it may have been a male that he'd found. I predicted that we'd get a male this year, after having somewhere around ten female-types in the last two years.

I'm wondering whether this bird is an adult, a 2cy male or 3cy male. I don't think it's an adult as it lacks a clear white wing panel but then is it too advanced for a first year (in March/April 2010 there was a singing bird that looked like a female but it was put down as a 2cy because I could not find any evidence that females sing)? Mind you, I'd have thought that Black Redstarts would reach full adult plumage by their second spring...? Perhaps it's just a relatively subdued male... research needed. 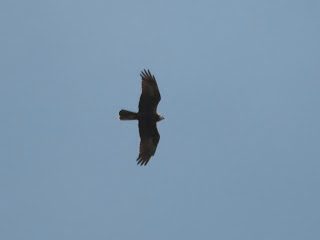 Roy has always theorised that light headwinds are great conditions for raptors and, knowing the conditions today, he came over. We put in a good few hours and did very little other than staking out at the Watchpoint for raptors. The highlight came when we were watching a low flock of four Common Buzzards - we didn't realise at first but, after a few minutes, a female Marsh Harrier replaced the buzzard that had broken off from the group and they started jostling in the air! This bird was picked out my Roy and marks his 100th bird at CFBW, giving the CFBW100 Club a membership of two. Marsh Harrier is a scarce bird at CFBW, there are only three records (mind you, they're all within the last twelve months): the first was picked up by Ian in April 2011 (which I saw) and the second was spotted by Grant Prater as he was working in the recording area in December 2011. The bird was picked up a short while later over Beddington. Another highlight for me came just after Roy had gone, with a fairly low Red Kite drifting north. We also managed something in the region of fifteen Common Buzzards, a bare minimum of four Sparrowhawks and two Kestrels.

On arrival at the patch this morning I heard what sounded like a Red-legged Partridge straight away - I thought I was probably hearing things but had a scan just in case and there was indeed one sat there calling away! This is only the third record in five years so quite a patch rarity. Roy came over straight away, having missed last year's; he's on 99 for CFBW now. After he left, the thing suddenly ran like the wind across the field, crossed the Reads Rest Lane and entered Harrier Field. I went over to try to relocate it but inadvertently flushed it as I approached a gap in the hedge and it flew towards Broadfield where the wheat is high enough now to make it almost impossible to find a partridge in that. PGo and Cliff had a go but couldn't see through the wheat. Also a couple of Greylags over, about the same time, and the Lesser Spotted Woodpecker calling at Banstead Woods. The day ended well with a Common Snipe calling just after 7.00pm. 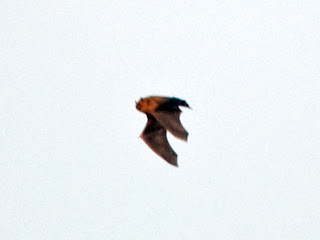 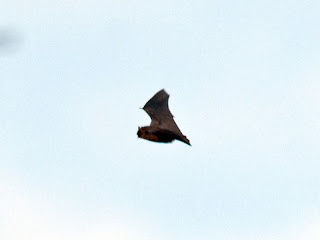 Popped to Epsom Common this afternoon to look for Mandarins (of which I found five drakes and four females) and was amazed to see this bat flying around - guessing at Pipistrelle but haven't researched visual bat ID, ideas?


Also notable, this morning as I drove from Canons Farm to college was an Egyptian Goose flying over the A217 at Banstead Downs, in loose association with another goose that was probably also an Egyptian but I didn't get an detail on this other bird. 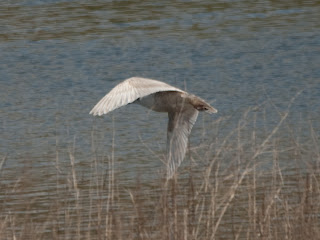 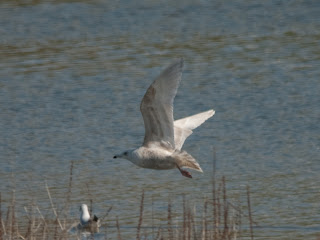 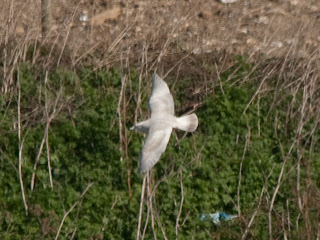 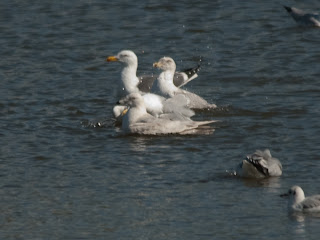 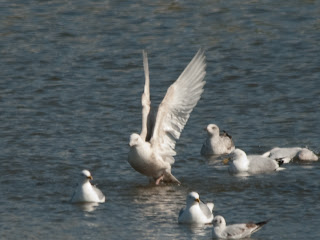 It has been frustrating me that, despite visiting Beddington several times this winter, I never caught up with the first-winter kumlieni Iceland Gull. It hasn't been seen in a while now so I'd started to forget about it. It was a pleasant surprise, therefore, when this second-winter 'Kumlien's Gull' presented itself on the main lake around midday today. The dark pigmentation in the primaries was immediately noticeable in the field and the strong tail band was striking, also.

I am damn glad I stuck around on the patch today, as I nearly didn't in the rain. There are no hides in which to shelter at Canons and the rain can really put you off after a while. I would have probably headed off late morning were it not that Ian Magness and I had arranged to meet a guy from the Downlands Project regarding scrub clearance. This meant that I was hovering around the south east side of Banstead Woods for a while in the afternoon. As I started to meander back, I decided to have a quick scan over the valley. Earlier, good numbers of Herring Gulls were moving south but I was busy with the meeting so couldn't really check them out. It was now mid afternoon and there was only a small trickle of gulls moving along the valley. None had passed for a few minutes and I was preparing my stuff to move off when a flock of about ten gulls presented themselves. Quick check, OH MY GOD THERE'S A WHITE-WINGER!!!!!!!! Fortunately, I've been using a new lens for the last few days and I've been making a habit of having the camera more ready than usual so it wasn't long before I was snapping away. Through the viewfinder my initial suspicions were strengthened and I became certain it was an Iceland Gull after switching to scope and looking at the pics. I couldn't believe what had just happened. I'd been considering doing some gull stake outs at this spot and thought maybe after seeing thousands of Herring Gulls I might see something different but  no, the first time I actually purposefully stop and grill the passing gulls with camera ready for any length of time I get a ruddy Iceland Gull ten minutes and fifty Herrings later!!!! Classic instance of being in the right place at the right time and shows how important luck is in birding.

This follows on from a highly frustrating white-winged gull that flew over the same place last year but the sighting was brief and I couldn't get my camera out in time, so it's amazing to get this on my patch list.

The reason I've hardly posted in the last fortnight is largely because there's been very little going on in my birding life lately. It's now been a little while since a tempting British tick has presented itself on the pager, which is a poor show following the high standards set by this spectacular winter for rarities.

I've been exclusively patching this weekend. Yesterday provided my first Mallard in the best part of a year there and they are bound to become daily soon (they can be seen reliably over the patch from mid March to early June but are otherwise nigh on impossible). There was a bit of a Meadow Pipit movement, too, with at least thirty present and showing well. Today was good with my highest day total of the year so far: 51 species. I think my highest is about 55 on an April day (but I don't often count it up)... I'd like to do 60 in a day this spring. I enjoyed seeing a/the male Lesser Spotted Woodpecker which was very considerate in creating both Canons Farm and Banstead Woods records for March by feeding on both sides of the fence. My first singing Chiffchaff of the year was great to hear, too, at Banstead Woods.

Every year is different at a local patch. Last winter, we were getting flocks of 30-40 Rooks and there was just one Great Black-backed Gull record. This winter, however, Rooks have barely been fortnightly and not reached five birds on a day while there have been, say, fifteen or so GBB Gull sightings. I three of the former today and one of the latter heading north east with Herring Gulls - quite a late record and notable especially as Beddington and Holmethorpe are now getting very, very few of these beasts.

Recently, I've been aiming to see a Woodcock on the deck at the patch. I've only ever flushed them, seen them flying at night or, on a couple of occasions, seen them whizz by in the daytime (presumably after being disturbed by something/someone else). I've been carefully checking a couple of spots where I've regularly spooked them before for settled birds. Today my plan worked and, when I was checking the area with P-Go and his dog Jazz, a beautiful Woodcock was sat there! I got a couple of record shots but it was a little obscured by vegetation so I moved around to get a better angle. I found one where the bird was in absolute plain sight - absolutely exquisite! I called P-Go over but even though we were about twenty five yards away (further away than I've ever kicked one up) it obviously knew it had been seen and didn't like it. It walked through the bush to the other side and flew. BUGGER!!! I was really pleased to have seen it but this thoroughly pissed me off; I would have got a ruddy good pic of that bird and wanted to savour it more, after years of longing to get this kind of view of one... and the damn thing flew even though we knew where it was and we were being careful not to frighten it. Instead, I was stuck with a couple of (in comparison to what I would have got) lame record shots. Damn, damn, damn!!! I should have digibinned it first and/or stepped back and got P-Go to approach from further away just to be extra safe.

I hope it's there tomorrow or some time soon. I know now that the technique I've been using has some success rate so I'm sure I'll get another chance. It wasn't just that I missed out on a good opportunity today that annoyed me, I want to reduce disturbance to the birds in this area because if they're over-flushed they might be reluctant to return to the spot, and I'll have to start the process all over again.

Later on I went to Beddington and finally connected with the female Pintail, a local area and Beddington tick. Also Water Rail and Common Snipe there.