Took Josh briefly to Queen Mother on a miserable morning, the Saturday before Christmas. Dipped the pipit, but here's a rubbish photo of the Long-tailed Duck that was present. 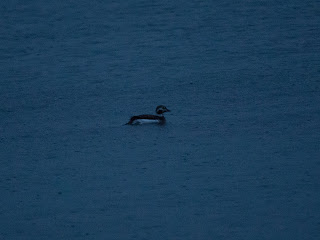 Spent most of the morning at the patch, producing an adult Great Black-backed Gull then took Josh to Dungeness, where the highlight was the third-winter Glaucous Gull which showed well. Also seen, on the sea, were Red-throated Diver, Guillemots, Kittiwakes, Gannets and an adult Med Gull 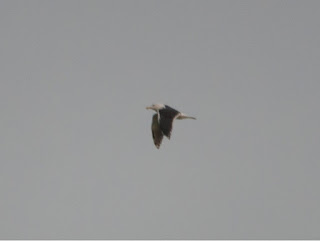 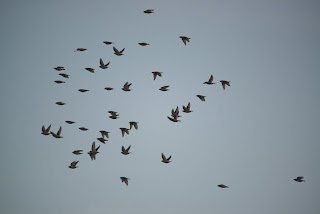 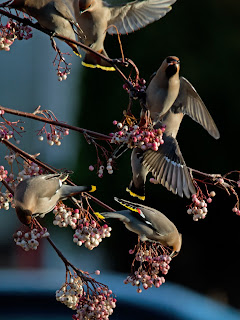 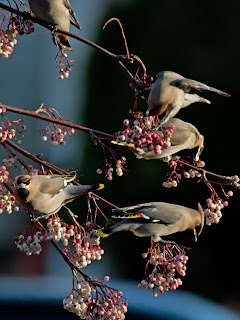 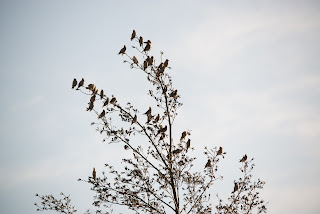 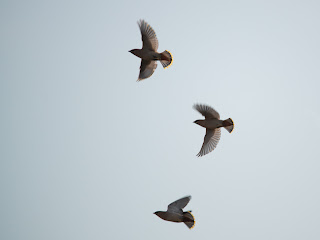 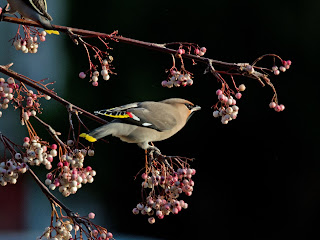 I hadn't seen any Waxwings in my local area yet this year so, just in case no more appeared (which I very much doubt), I stopped off in Ewell this morning before going to the farm and enjoyed the flock of forty-two (thought it was forty at the time but after seeing a report of an additional two I re-counted the flock from photographs and there was indeed the larger number). Unfortunately, the berry bush they had found was next to a busy road and they were easily startled, so never settled for long. The farm was relatively quiet, the highlights probably being a flock of twenty-two Skylarks and very nice views of a few Fieldfares.

Mark, Paul (aka P-Go) and I led the third and final CFBW Bird Group tour of 2012 today. There was a decent turnout of about fifteen eager birders and the weather was lovely apart from one very sharp shower. We'd been hoping that there would be number of finches, possibly even Bramblings, for this tour but, in recent weeks, finches have been very thin on the ground indeed. We did manage to show everybody Little Owl, Common Buzzard, Bullfinch, Yellowhammer, Skylark, Fieldfare and Redwing, amongst others. Only a few people saw the single Siskin that flew over. 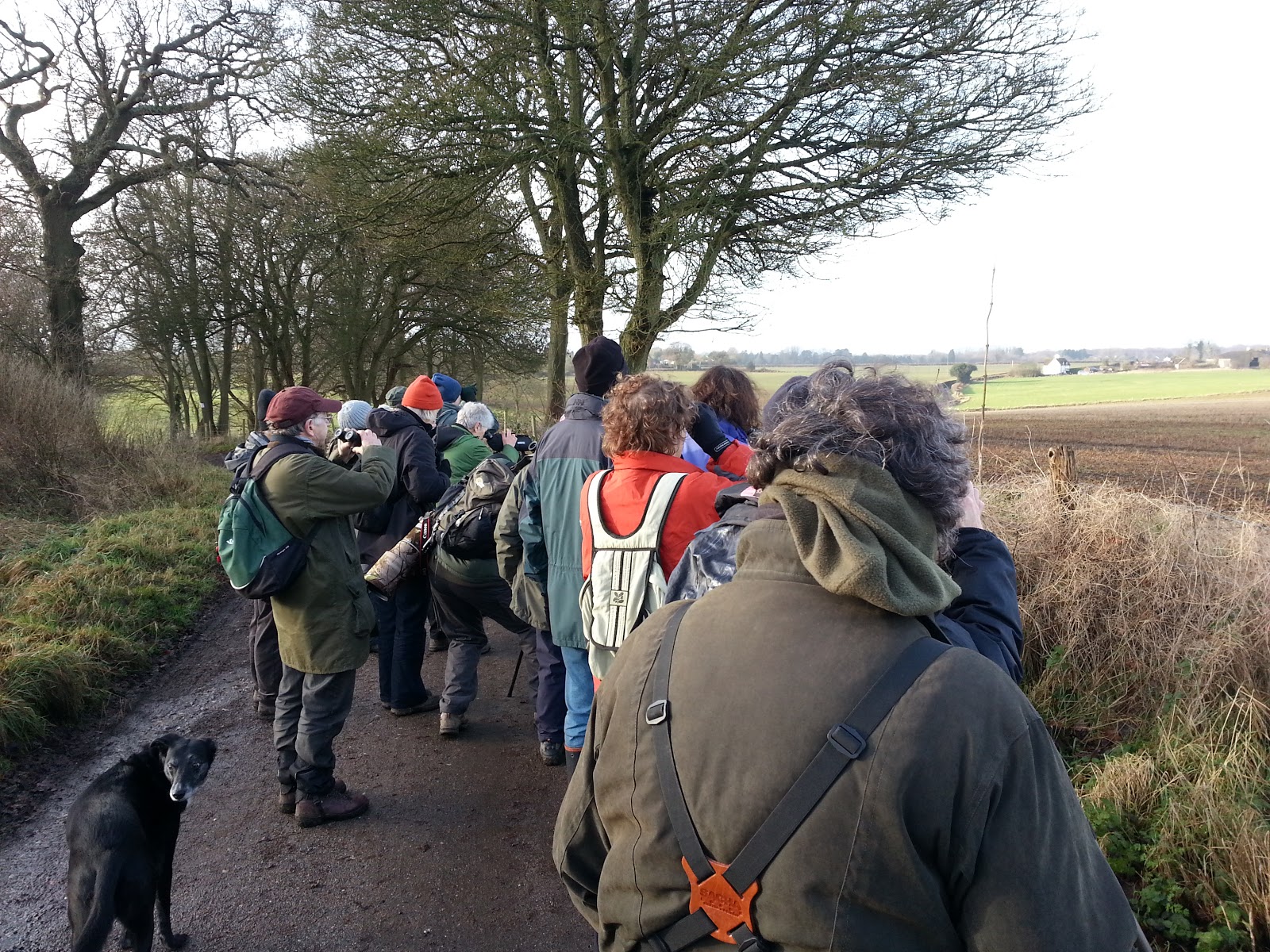 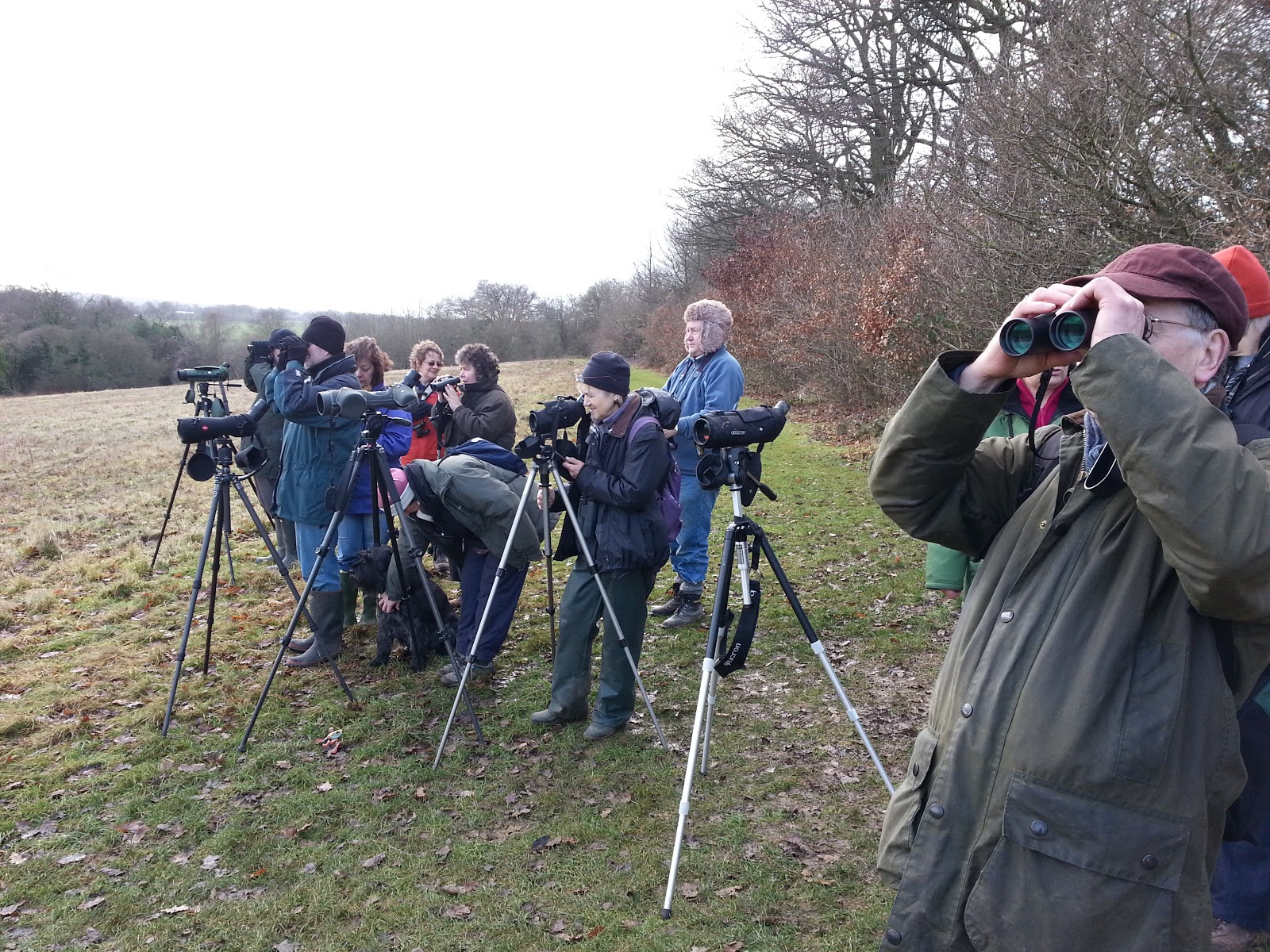 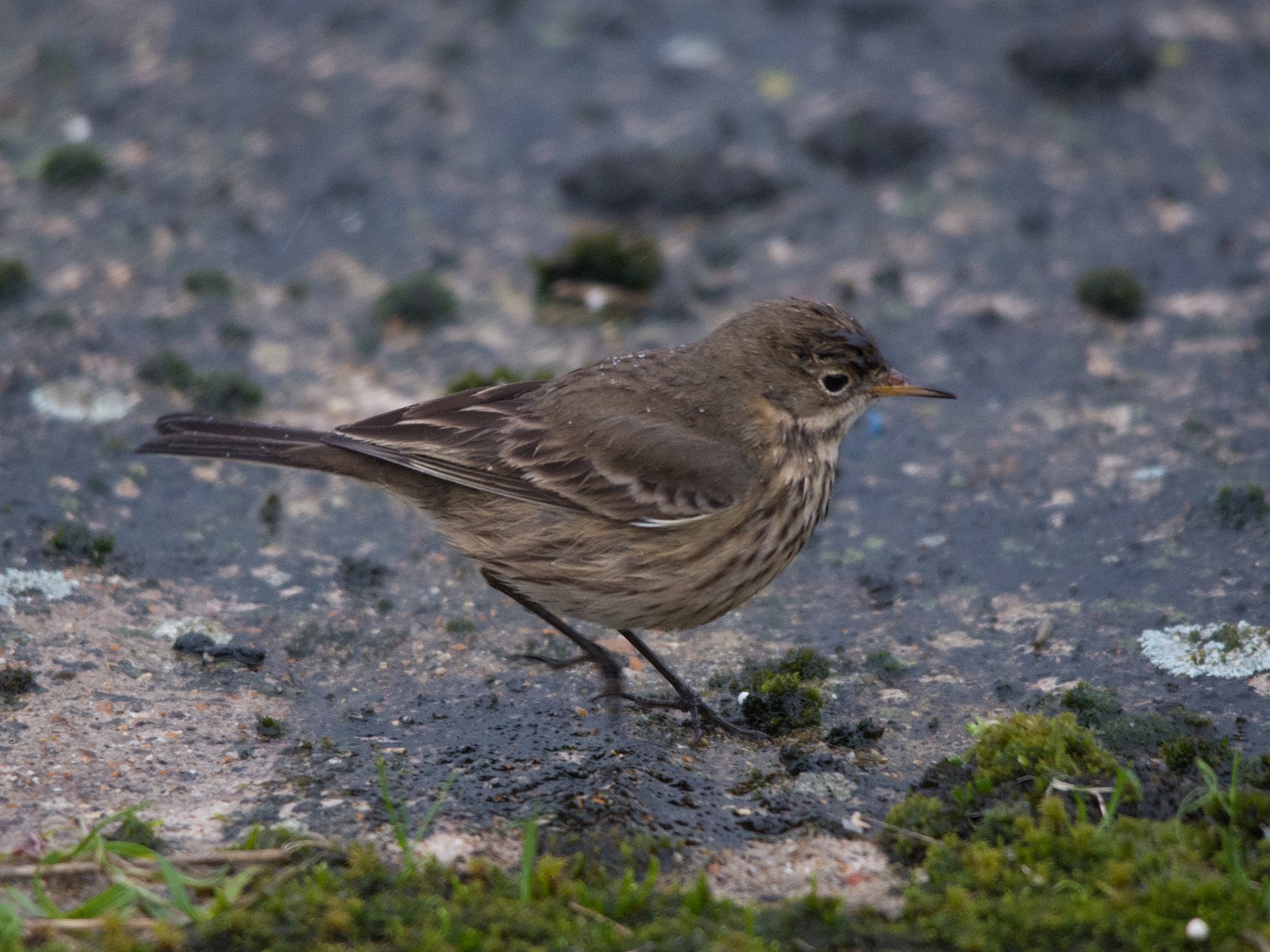 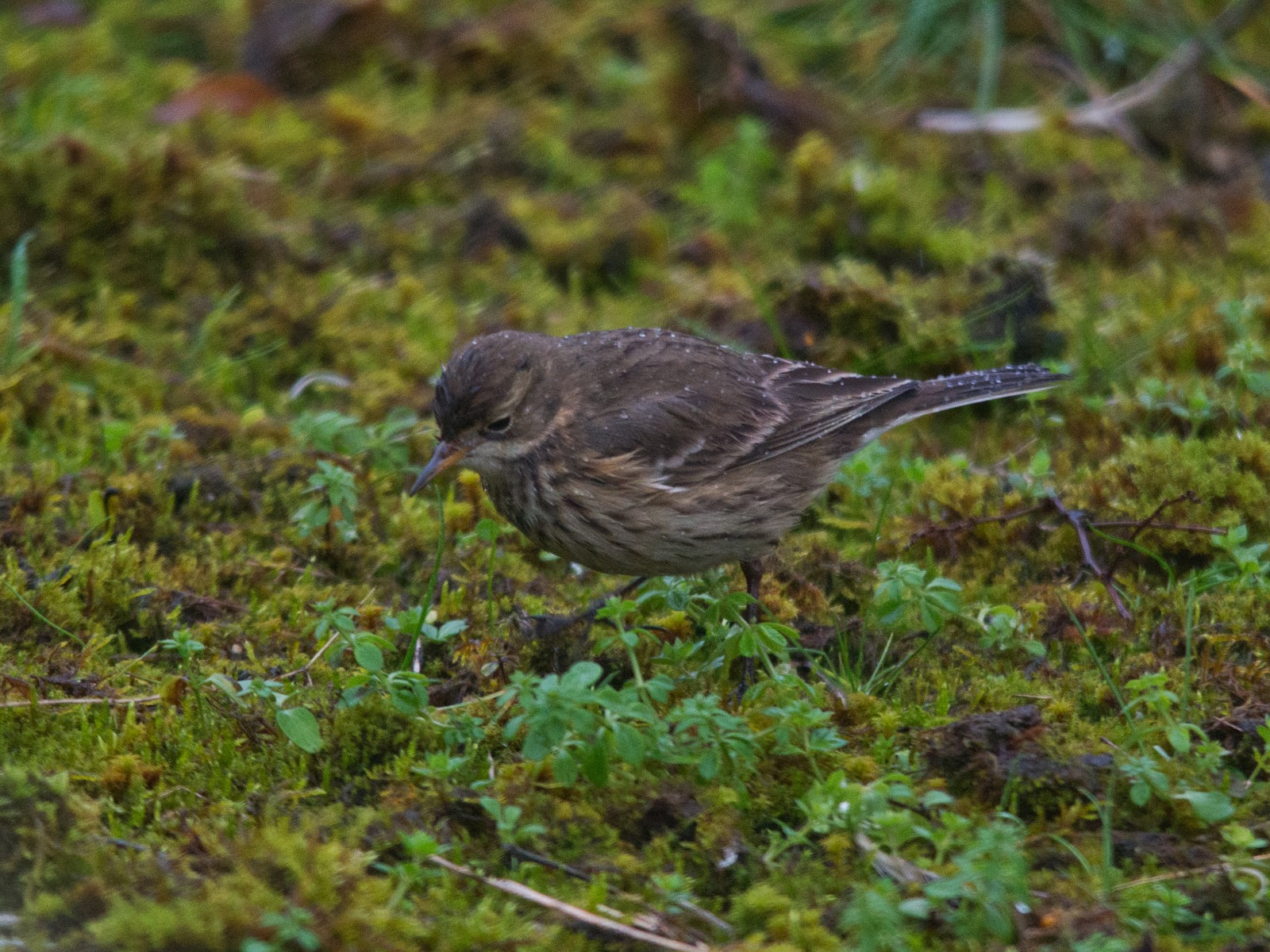 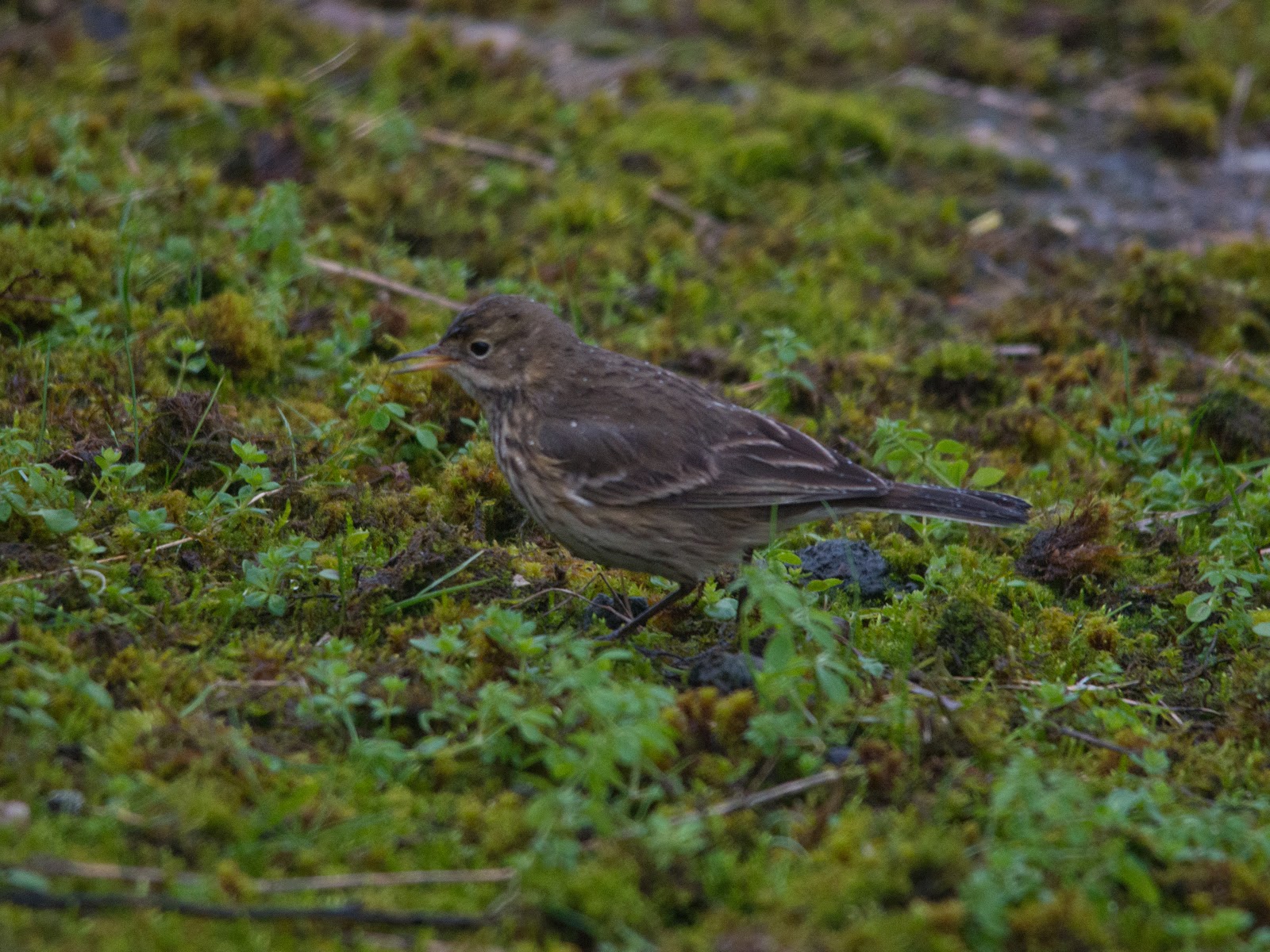 Frustratingly, the Buff-bellied Pipit at Queen Mother Reservoir was a no-go as soon as the news came on the pager yesterday, as I had a mock exam in the afternoon. Still, it had been found the previous evening so looked like it might be sticking around a little, and I was hopeful for it continuing its stay until today. Franko had just had an operation on his left hand, making driving a little difficult so we arranged last night that I'd pick him up on news this morning; just after 9.00am he rang to say that Andrew Moon and others were watching the bird and it was still on site, so I picked him up and off we went. It was around this point that the weather took a nasty turn, with strong easterly winds and rather heavy rain. The journey to the reservoir wasn't too bad and we were soon searching with the other birders for the pipit, but could only find Meadow Pipits. We walked towards the south end but turned around after a while and tried the other side of the sailing club, Paul Whiteman arrived and went where we'd come from, after about twenty minutes the bird was on the pager and we rushed over there, passing a very happy Whiteman on the way. It was only a another hundred yards beyond where we'd looked! The weather was still gross, having turned almost to hail at one point, but the sodden-looking BUFF-BELLIED PIPIT showed superbly in the end. This was my second B-b Pipit, my first being on Scilly less than two months ago, and was equally as showy as the Bryher bird. Unfortunately, we couldn't enjoy this first for London for as long as I needed to get the car back for dad, and although we left in good time the traffic was awful on the return and I was very late back. The Red-necked Grebe was a welcome bonus bird as well.

I'm pretty sure I lost my iPhone at the reservoir this afternoon, probably at the south end of the car park, so if anyone finds it please let me know! Thanks!

The best redpoll ever 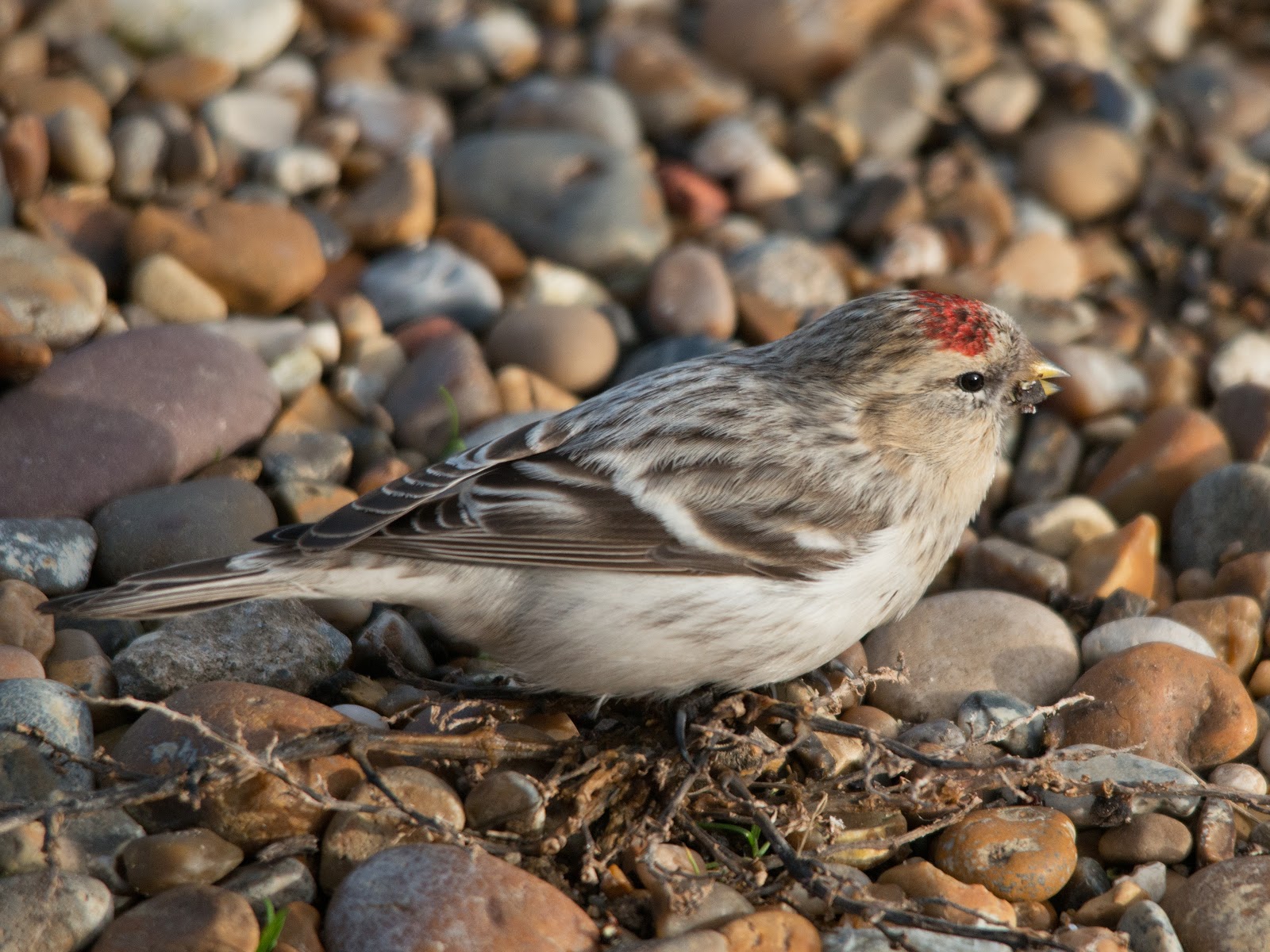 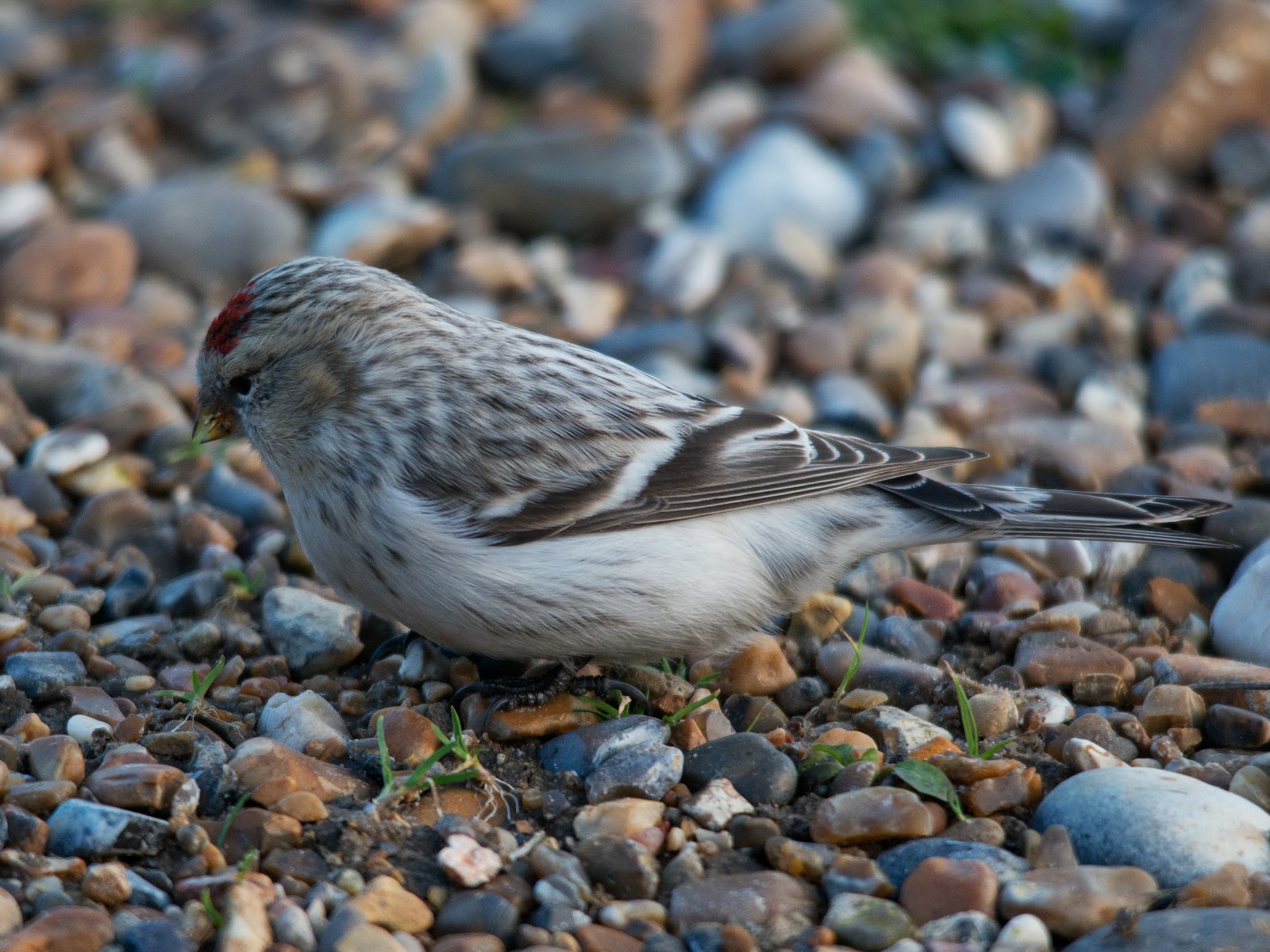 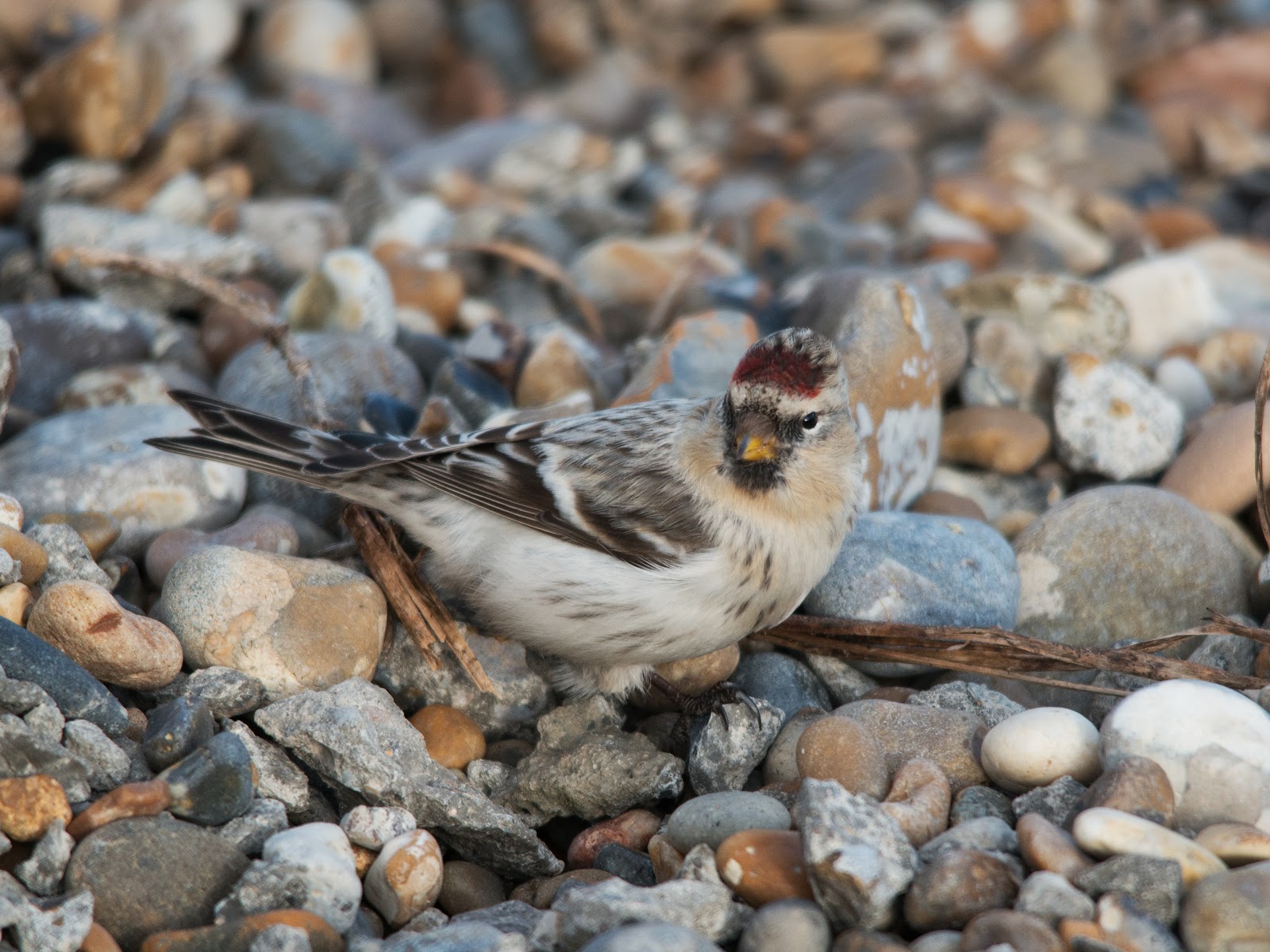 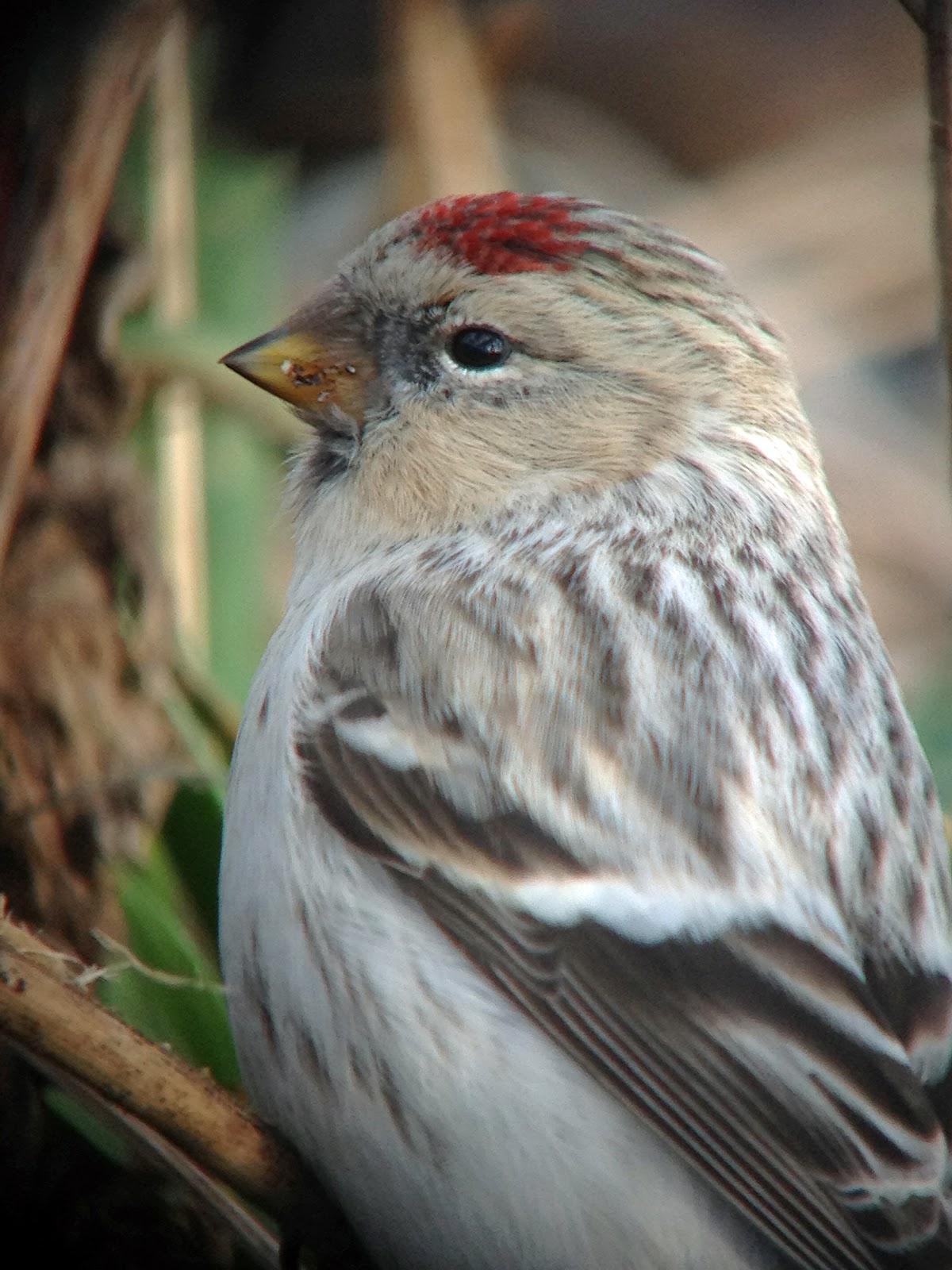 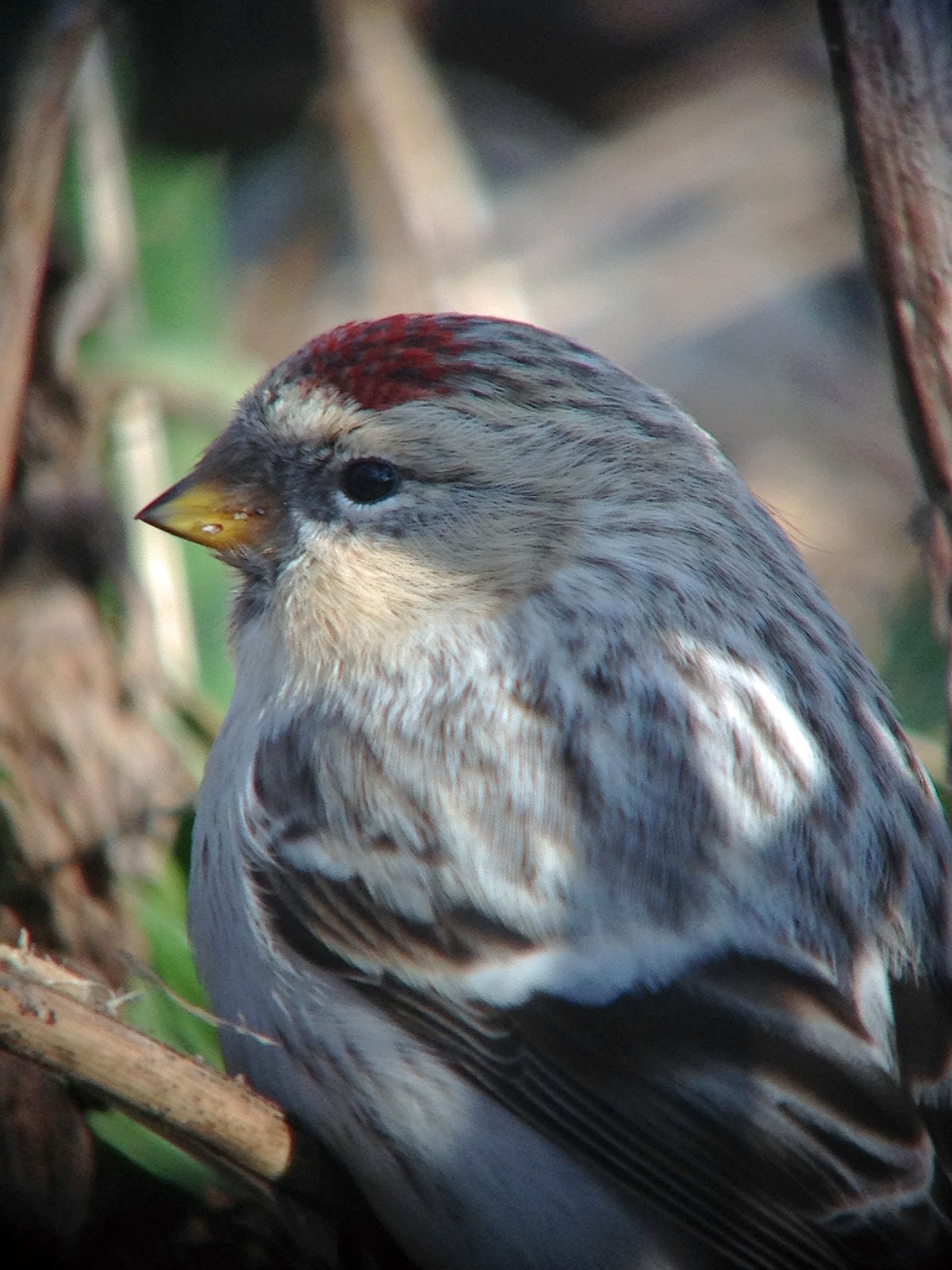 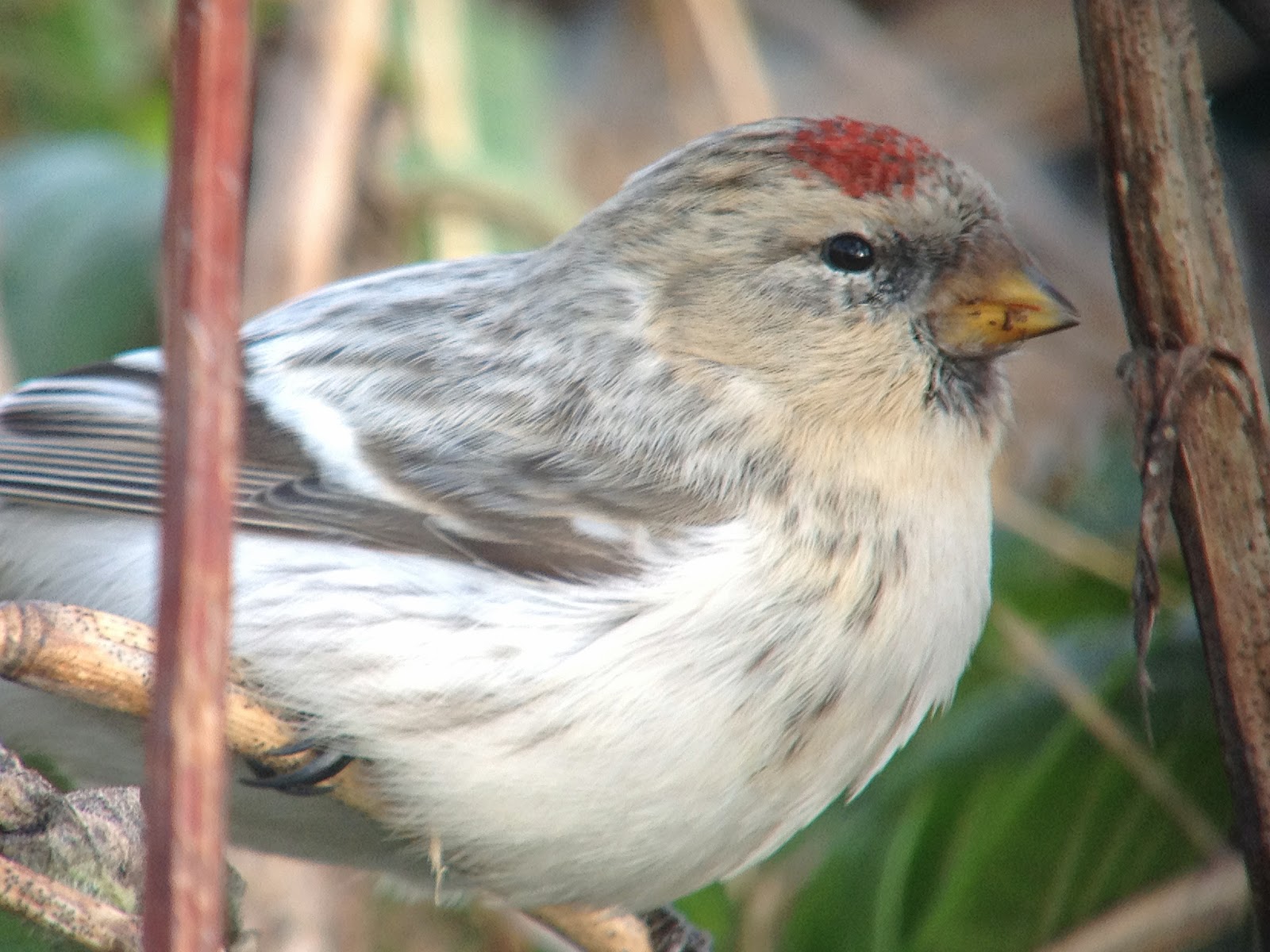 Liam's been staying with me at the weekend for some birding (see yesterday's post for our first outing) and when a HORNEMANN'S ARCTIC REDPOLL came through from Suffolk in the middle of dinner, we were erring as to whether or not to go. It was a bit of a way and we were looking forward to a relaxed day staying local. We started today at Banstead Downs Golf Course, locating at least one of the wintering Firecrests and both independently hearing a 99%-certain Waxwing calling once as it passed over, maybe a hundred feet up. It was then that the redpoll came on the pager; I called Ian to see if he was up for it, and picked him up. We very briefly stopped on Canons Lane to allow Liam to Canons-tick Lapwing, which was a success. A good sign!

The journey was remarkably smooth and we got to Aldeburgh in about two-and-a-half hours. It took me a while to get ready and by the time I started putting my camera over my shoulder and locking the car Ian and Liam had seen the bird well and watched it fly off! Not to worry, though, as it was soon relocated and it didn't exactly prove a challenge to get on or get clear views of, showing virtually no fear of the several-dozen birders admiring it. A true beauty, allowing both its overall striking appearance and more precise features to be observed in exceptional viewing conditions. Happy all round, with no reason for angst about photographers or people getting too close as the bird simply did not care.

Today I enjoyed a productive day out in beautiful sunshine with Liam Langley. We planned to look for the Velvet Scoters at Island Barn but couldn't find a good viewing spot, so left for Gosport after seeing a Green Sandpiper drop in. In Walpole Park, Gosport, the Ring-billed Gull showed spectacularly; this was a first for Liam and the second individual I've seen. On the way back to the Banstead area we called in for the Great Grey Shrike which showed, albeit distantly, without much of a wait at Thursley Common (my first attempt for one in Surrey). After this we had another look for the Velvet Scoters, finding a viewing point but only seeing two Green Sandpipers, a Lesser Redpoll and a few Wigeons of any note (plus a heard-only Water Rail). 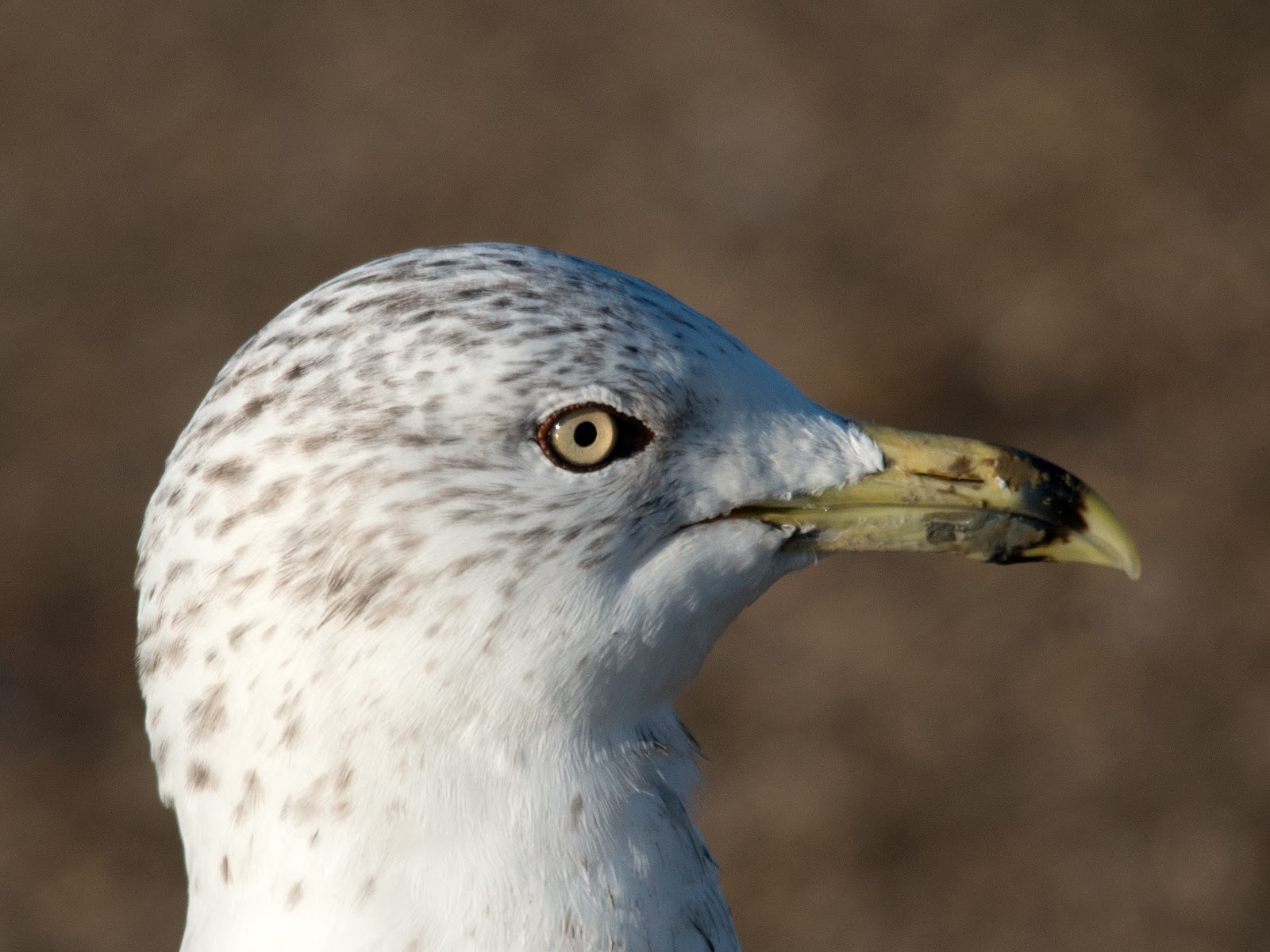 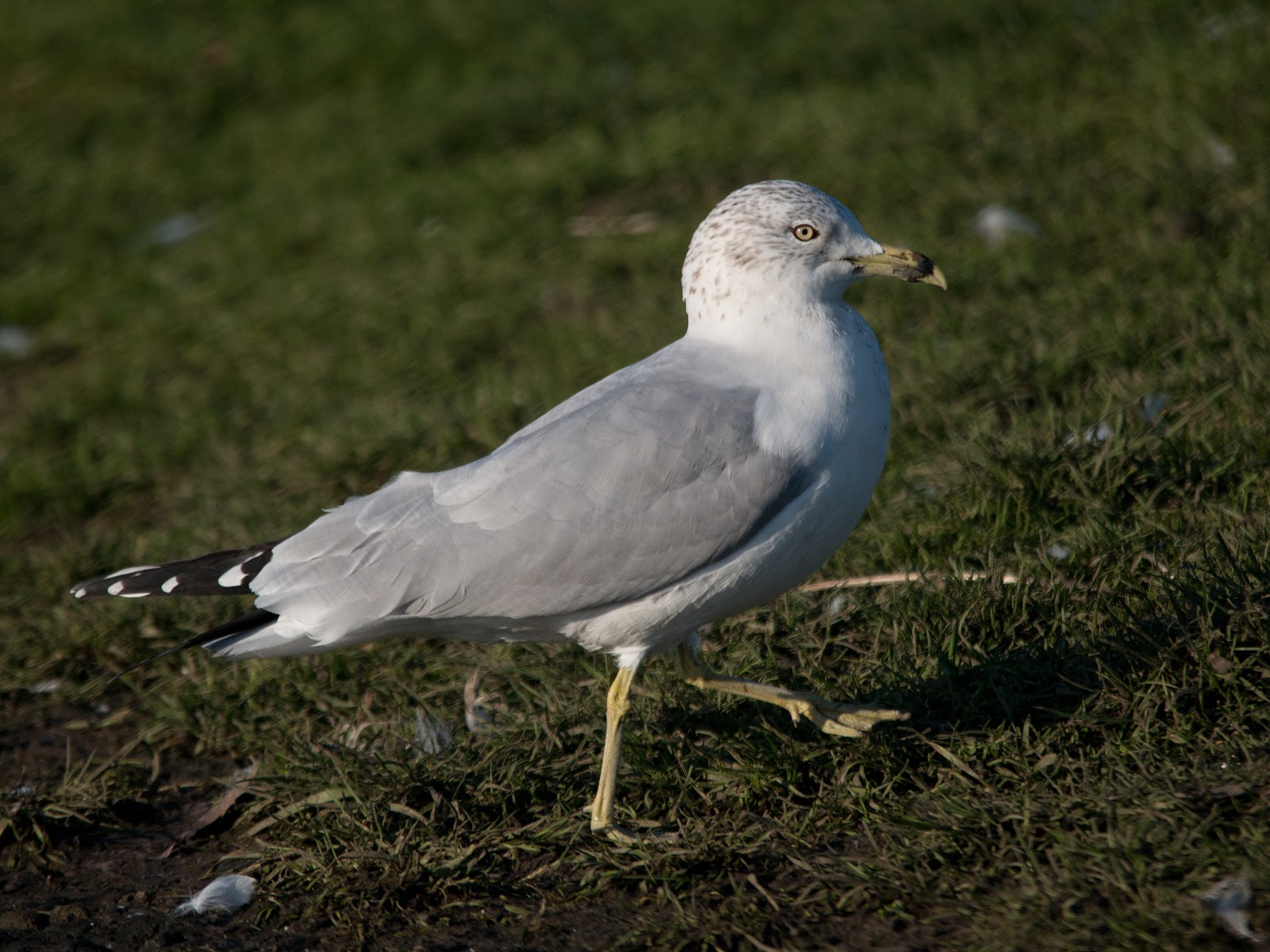 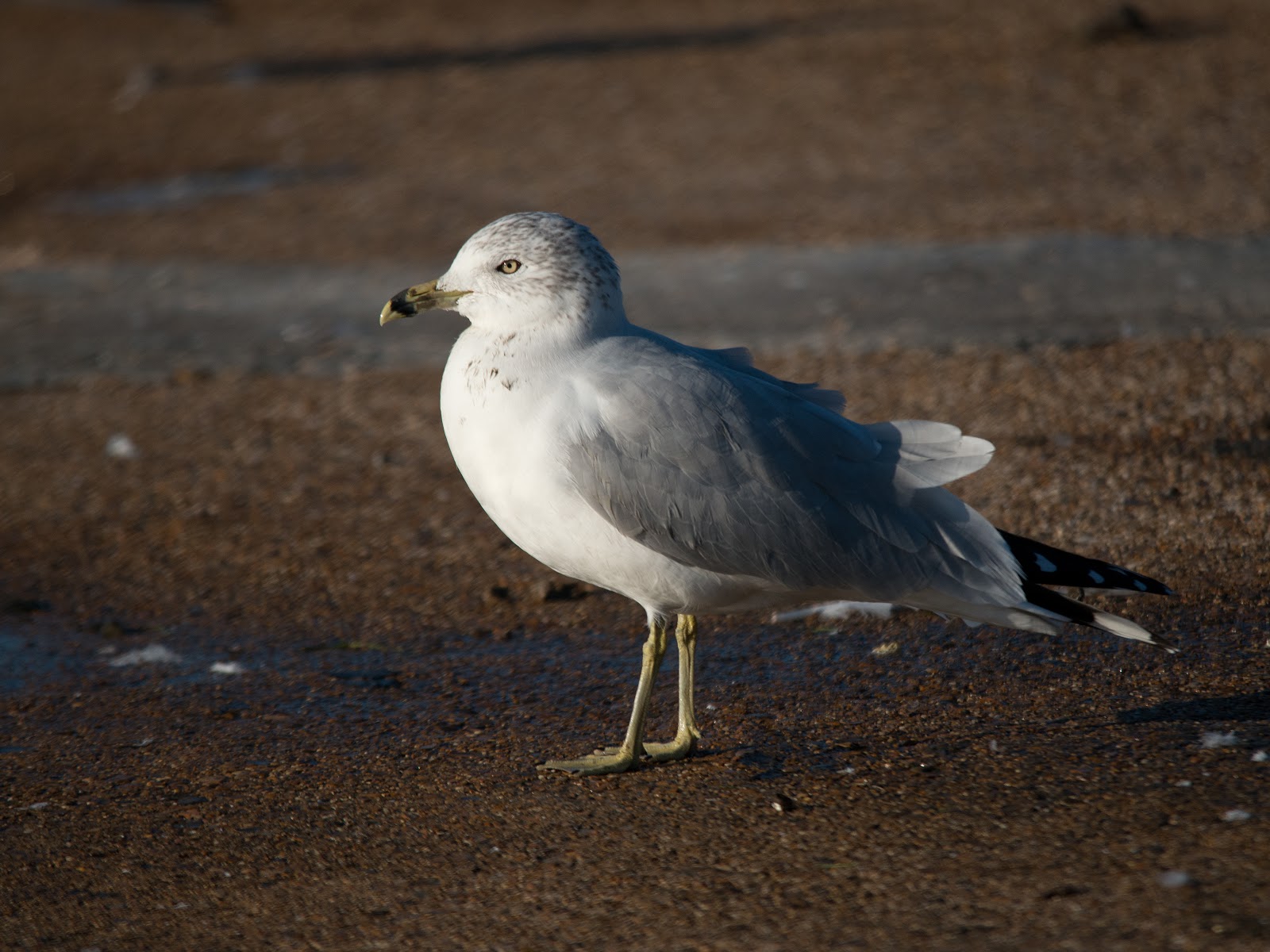 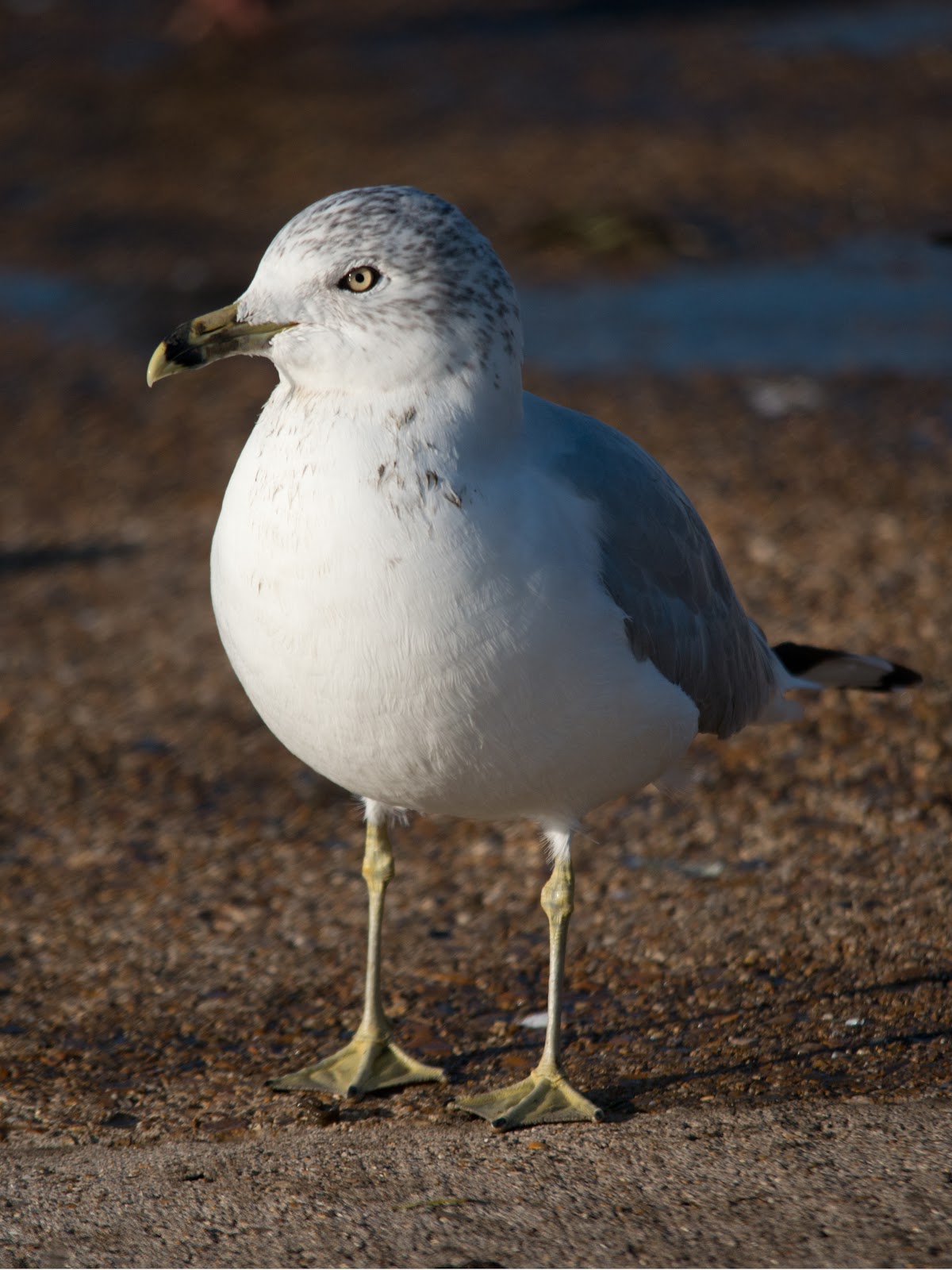 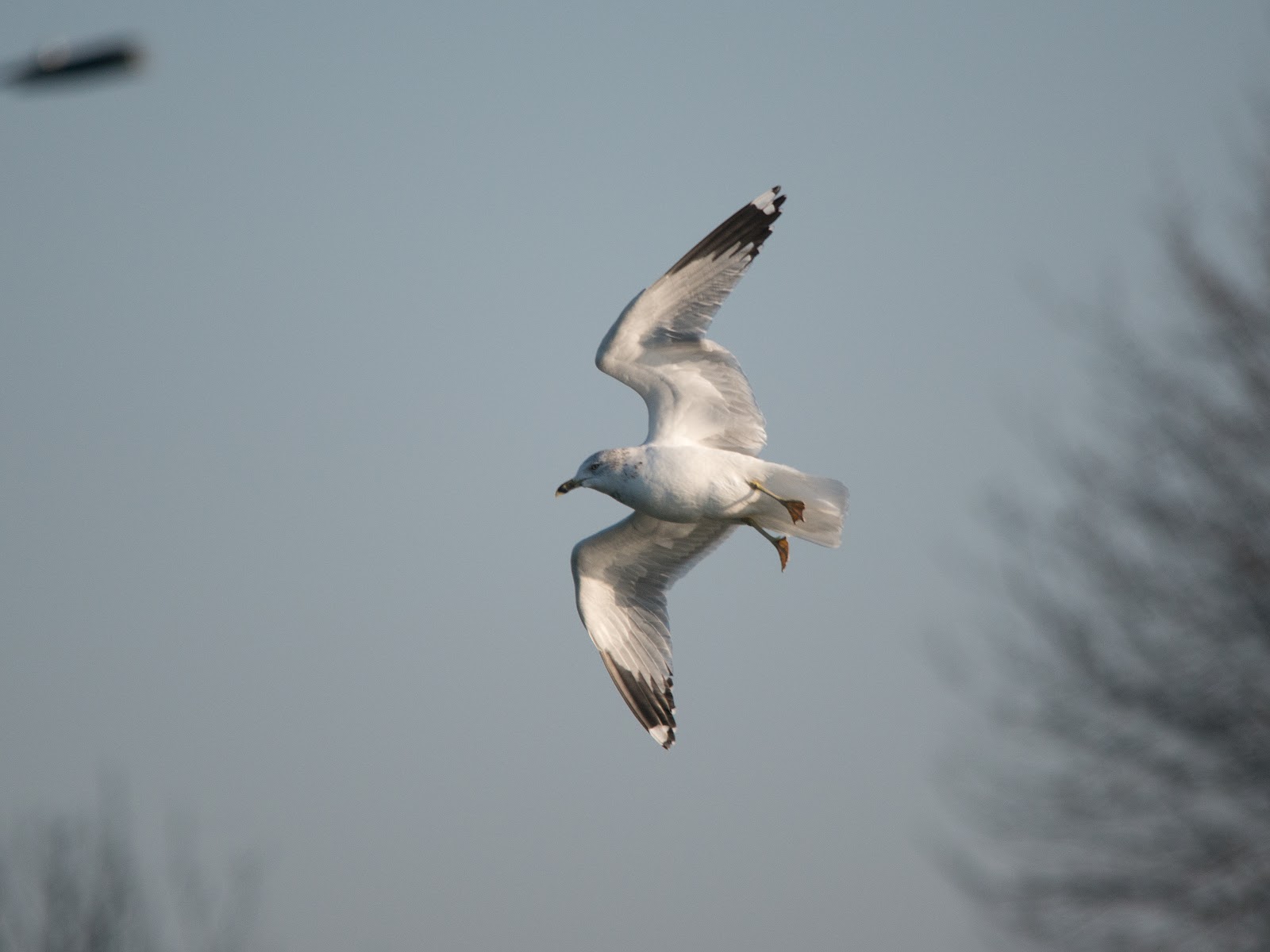 
Well it's taken three years but I've finally added the bird that appears first on the British list when it's in taxonomic order to my patch list. Mute Swan! Today a juvenile appeared from the east and made its way north-west, quite high. There's very few records at CFBW, with the only ones that I know of being two that Dodge had four or five years ago, two that Mark had down the Chipstead Valley in 2010 and a single seen by Larry over Legal & General last year. So it seems it's probably relatively regular but it sure is a tough one and, as I've done, you might be in for a few years' waiting for one. Come to think of it, I don't think that I've seen a Mute Swan flying over any site that lacks water or doesn't have any very nearby waterbodies before. I wonder whether it had been frozen out and forced to move, or, being a juvenile, it had been pushed out the territory by its superiors?


Yesterday I was pleased to see that the number of Lapwings in Tart's Field had increased to thirteen birds. Roy counted twenty-six roosting there this afternoon, so with two from Monday to Thursday, five on Friday, thirteen yesterday and twenty-six today, it really looks like we might be building up a wintering flock! Hopefully they'll get to a decent number and maybe pull something in with them. Anyway, as far as I know, twenty-six is the highest number recorded on the deck in nearly five years.

I'd managed to get a few decent sessions up at the patch this week, and rewards were few and far between so I thought I'd accept a change of scenery today and take a casual day out in Kent with Josh, and Amy, from the local camera club that I've been to a couple of times. They were mainly interested in watching waders so I took them to a beach that I remembered at Leysdown-on-Sea, Isle of Sheppey. Nothing spesh there but we enjoyed close views of a select variety of common 'shorebirds' such as Sanderling and Turnstone plus a small group of dark-bellied Brent Geese. There was only one Dunlin! We briefly visited Capel Fleet where we saw six or so Marsh Harriers and a couple of Peregrines, plus a Common Snipe, large flocks of Teal, and half a dozen Golden Plovers. After this we decided to go to see the flock of Waxwings at Yorkletts, where sixteen birds showed very well in the end. I'm sure there'll be local flocks around Banstead or Sutton this winter but they're always worth seeing if the opportunity's there. Super things.