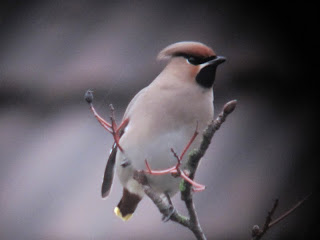 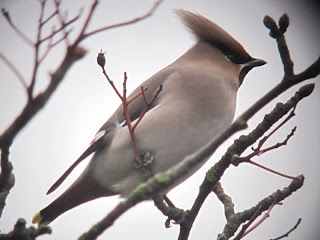 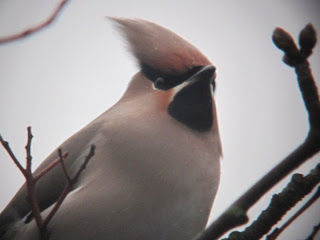 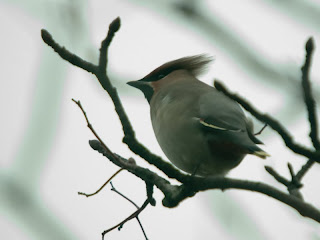 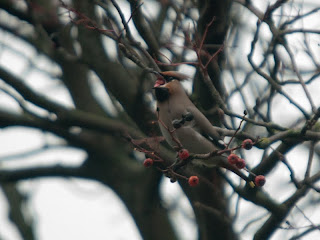 It's not been a bad weekend. Today I got excellent views of the Waxwing depicted above in Finchley. A nice London tick, it was incredibly tame and easy-to-twitch, as soon as I parked I was onto it. It was inactive a lot of the time, sitting atop a tall tree digesting the berries it had just consumed. I saw it feeding for a short while once in the small bush in front of the Total station (apparently the only berry bush in the area, and it didn't have many berries on, lots of those that were there were rotten!)

Yesterday wasn't bad either, it's not at all exciting for anyone outside the patch but I found an Egyptian Goose and 5 Greylag Geese . . . both species have never been recorded at Canon's Farm and Banstead Woods before! Pheasant was also a patch tick for me. 2 Stonechats and a female Brambling were also present with a good supporting cast. 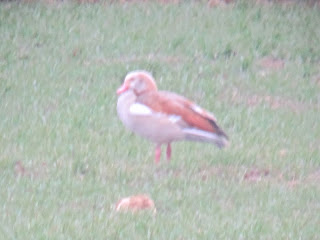 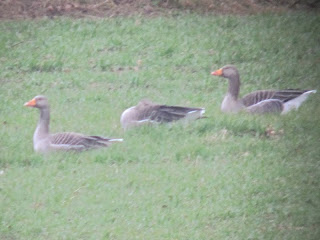 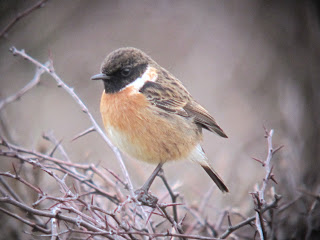 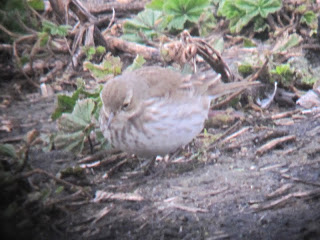 I was going to give this post a dreadful cliché as a title but thought better of it . . .

I had another attempt today for Bitterns up at the London Wetland Centre, spending most of my time scanning and re-scanning the edges of the reedbeds but no joy. 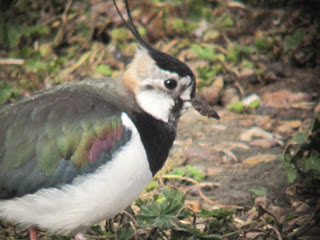 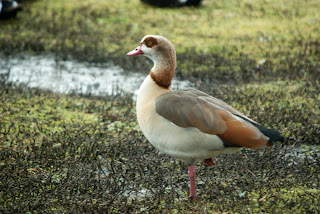 Best birds today included a Water Pipit which showed well from the WWF hide, a drake Pintail keenly followed by two females and a calling Water Rail. Category C's were a theme with 3 Egyptian Geese roaming the 'arctic tundra' with Barnacle Geese and Long-tailed Ducks, and a showy Rose-ringed Parakeet. It was pretty pants really . . . 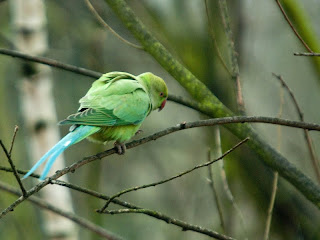 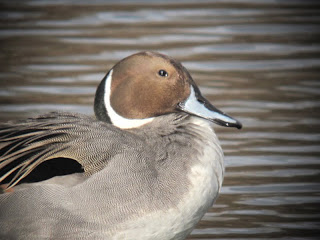 Today I took advantage of an opportunity to go birding on the south coast and hopped into Billy Dykes' car at 8.30am bound for Langstone Harbour and Hayling Island.
We arrived at Langstone Harbour at 10.00am and I was greeted by a group of about 20 people who were there for the RSPB walk. I don't normally do these group walks and they're not my sort of thing really but it is nice to do them once or twice a year.

Red-breasted Mergansers and Goldeneyes were immediately viewable as was an assortment of common waders. A Greenshank showed very well providing me with a year tick and there were good numbers of Bar-tailed Godwits which were also a year tick.
One of the several Curlews in the area showed excellently in a meadow next to the footpath. 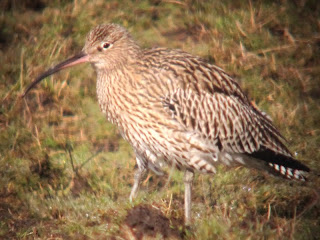 A Common Buzzard circled in the distance and I located two adult Mediterranean Gulls amongst a group of Black-headed Gulls. 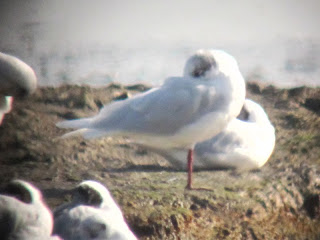 I jumped into a birder's car and the group went over to Hayling Island. 15 Black-necked Grebes were off the oysterbeds. The best bird was soon seen and everyone got distant views of a female Velvet Scoter, a useful year tick. It took off, revealing its white wing panels, and landed with a group of Goldeneye. 3 Common Buzzards and a couple of Kestrels were in the area. 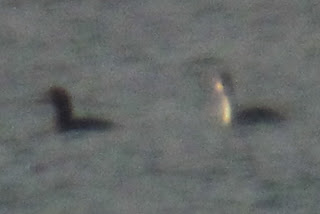 
3 Rock Pipits showed excellently a bit further along the oysterbeds. Good numbers of waders were around with a few Dark-bellied Brent Geese. I managed to pick out a couple of Pale-bellied Brent Geese, a race-lifer for me. We got slightly better views of the Black-necked Grebes as we moved further up and saw the Velvet Scoter again. 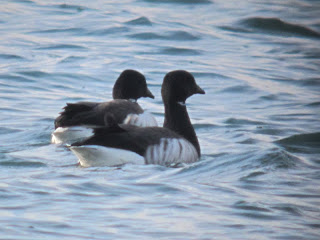 
4 male and 3 female Red-breasted Mergansers performed stunningly on the oysterbeds, coming at exceptionally close range for the species, at times, and displaying and chasing each other in wonderful light. These are one of my favourite ducks, beautiful and full of character. 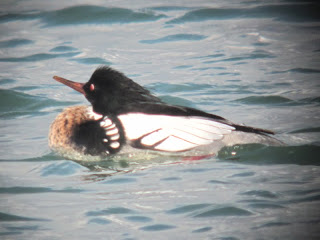 The walk finished and Billy and I got in Sean Foote's car to have a look for the Green-winged Teal for Billy. We soon got to Budds Farm Sewage Works and scanned through the Eurasian Teal for half an hour or so but couldn't get onto the yank. 3 adult Mediterranean Gulls were with the flock of Black-headed Gulls and gave their yelping call as they flew off. My dad soon arrived and drove us back home . . . not a bad day.

I spent today (Wed 17th Feb) patch watching at Canon's Farm and Banstead Woods. It was a beautiful day and probably our best there yet.

The highlight was a male Lesser Spotted Woodpecker which showed well and called in the Woods, a patch tick for me and Kevin. I do not have to worry about any elusive resident woodland birds now for my patch list, but Kevin still hasn't connected with Woodcock or Marsh Tit at the site. It was also a British year tick. 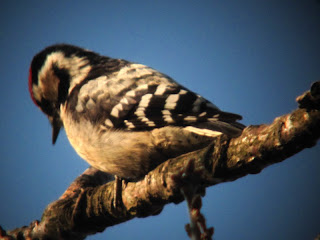 A Common Buzzard was seen several times soaring over the site. We thought this was the resident bird but she was still at the 'Big/Buzzard' Field so it was a 2nd bird.

We could hear but not see the resident Little Owl that is usually present in one of the trees just east of the derelict buildings/the middle farmhouse. To our surprise we heard another bird calling on the opposite side of the road.

Kevin thought he may have seen a Tree Sparrow amongst a flock of c.15 Yellowhammers. We were trying to see it, where it appeared to drop down, when a woman and her kids walked down and set up all the thrushes and finches and buntings, despite asking if she was going to disturb anything when we politely told her she would in fact be scattering stuff which may include Canon's first ever Tree Sparrow. She had a right to walk down there, but what was the point in asking if you're going to disturb something that is being watched if you are just going to walk down there anyway! 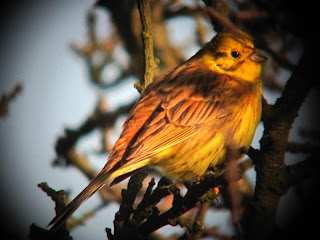 2 Rooks, a Lesser Redpoll, c.40 Linnets, c.11 Skylarks, 2 Treecreepers; 5 each of Nuthatch and Coal Tit; 4 Kestrels, a male Sparrowhawk, 23 Pied Wagtails feeding together, flocks of Fieldfares and Redwings, a pair of mating Rose-ringed Parakeets and other bits and bobs were also seen. See the Canon's Farm and Banstead Woods wiki for full sightings and information on the site. 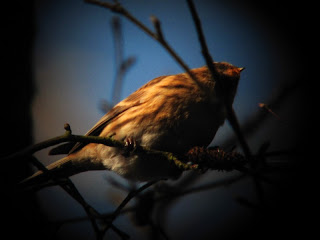 On Monday Phil Wallace and I immediately left a couple of controversial geese that I've described in the post below for a first for London that had been confirmed at Walthamstow.

I did pop over the previous afternoon to have a look for the then 'probable' Dusky Warbler but failed. However, now that the bird was being paged out as confirmed, there were bound to be more people there to find it and it was definitely worth the detour.

Got there at 3pm or so where there was a handful of birders present. We split up and searched the scrub around the flood relief channel at the NE end of Lockwood Reservoir. A couple of possible sightings were announced that caused people to run but they didn't come to much.

The bird was eventually heard calling in vegetation along the eastern side of the channel and everybody had to climb onto a 3 foot concrete wall, shimmy along a bit, spin around a fan of metal spikes, shimmy past some barbed wire, hop over some metal railings then tight-rope walk across a pretty thin concrete girder.

I could hear it calling, frustratingly, just on the other side of the fence along the channel, in some thin vegetation. I got a very brief view as it flew to the next clump but not tickable.

Eventually I got fleeting views of the DUSKY WARBLER creeping around on the other side of the fence, before it came over to the other side for a split second. Nice. Andrew Self found a way of scoping it from further down and on the west side of the canal and we followed suite, getting reasonable views as it moved through the bush I last heard it calling in. Kevin McManus arrived as dusk was only about half an hour away and managed to see the bird.

Had a brief look at Lockwood finding only a female Goosander and a few Goldeneye, no Slavonian Grebe.

An excellent London tick, being the first record for the recording area and a British tick for me too, not to mention a lifer.

I arrived at Budds Farm Sewage Works at around mid day where there were a couple of other birders and negative news on the duck. Had a bit of a scan before looking over at Langstone Harbour and mopping up 7 year ticks in the form of a reasonable variety of common waders, plus Red-breasted Merganser (of which there were 39). The highlight was a flock of 16 Black-necked Grebes which were on the water off the Hayling Island oysterbeds which I could see quite clearly from my perch. 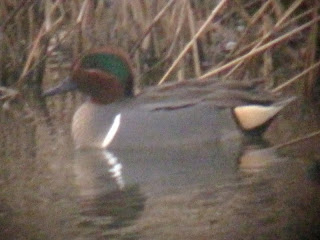 I got a message on the pager saying the bird was still present on the right hand lagoon in the early morning, my spirits lifted slightly and I headed over again to have a look.
It didn't take too long to get onto the drake Green-winged Teal, at last. My 265th British bird and my 2nd lifer/British tick of the year. Arguably a comparatively boring bird but I found it quite interesting, noting (other than the lack of the horizontal stripe across the body and the presence of a vertical stripe on either side of the breast) its slightly greater bulk than its European cousin, although I am not sure whether this was just a trick of the eye individual to this bird.
It joined up with a small group of Eurasian Teal and flew with them to a sedimentation tank where it showed reasonably for a while before disappearing behind to rotor, just before I disappeared to Southsea. 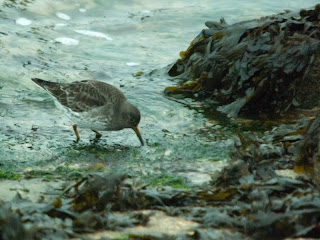 The above bird was one of 11 Purple Sandpipers that showed well for me along the shoreline with a single Turnstone just infront of Southsea Castle, the last year tick of the day, bumping me up to 113.