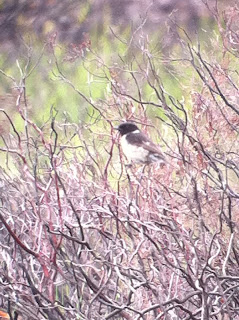 A trip to the New Forest today with Phil Wallace went rather well. See Phil's blog soon for many more photos than are shown here, of much higher quality. The day started well with a Red Kite that flew low over the M3. Acres Down at mid morning was first on the iternery and after not too long a magnificent female Goshawk flew into my scope and performed for the other birders present; no Honey-buzzards as desired (apparently they haven't been seen there this year) but three or four Common Buzzards and lots of Siskins were noted. The edge of the wood at the bottom produced two of both Tree Pipit and Woodcock and some heard-only Woodlarks. Inside the wood itself we failed to find any Common Redstarts but did enjoy a Lesser Spotted Woodpecker as it materialised about ten metres in front of us and nearby I got a brief view of what I'm fairly sure was a juvenile Firecrest. 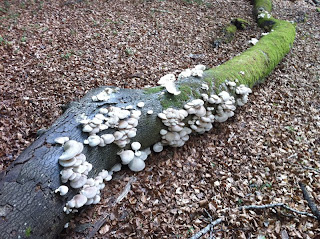 Just as we began to drive away from Acres Down we heard the loud and distinctive song of a Firecrest and immediately stopped. The bird showed incredibly well, singing away and flashing its glorious crest; Firecrests are top class birds, I can never get enough of them!

We spent the rest of the day at Bishop's Dyke which was also productive, a handful of Stonechats still persisted in perching obviously despite the strengthening wind whereas a calling Dartford Warbler was less tolerent of the chilly and gusty weather, only showing once in flight. We searched a sample of the wooded areas for Common Redstarts but failed. We got onto a tit flock which provided a Goldcrest and a couple of juvenile Chiffchaffs along with an adult. At least one Common Crossbill was heard flying over. We started making our way back and as we left the wooded area Phil got onto a family of Common Redstarts, including at least an adult male and at least two juveniles the latter of which showed well on and off while the male was seen only once, briefly. 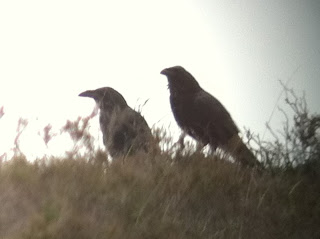 The walk back across the open heath to the car park yielded superb views of a pair of Ravens which gave us an excellent aerial display and even settled on the heath next to some iconic New Forest ponies. Nearing the car park we flushed three Woodlarks, two of which we managed to relocate, getting good views, and one turned out to be a juvenile that was regularly being fed by the adult. 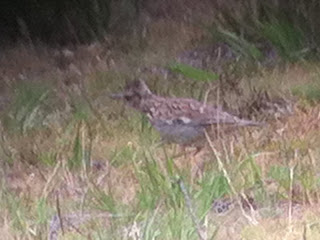 A good day, with only two target species (Honey-buzzard and Wood Warbler) slipping through the net, thanks Phil!