I arranged to spend the day birding at the London Wetland Centre with fellow young London birder Louis Freeland-Haynes. Starting just after opening time we went straight for the Dulverton Hide where little was noted other than Common Snipe and Peregrine. Suddenly the ducks and Lapwings got up and we instinctively checked the sky for raptors through the hide windows but we couldn't get on anything at all, we figured perhaps the Peregrine had dashed through. Upon leaving the hide we were greeted by that always gutting 'Did you see it?', we asked what the birder was referring to and he responded with 'Black Kite just flown over'. Our response mainly consisted of expletives and expression of our frustration that we thought a raptor had gone over but couldn't get on it. 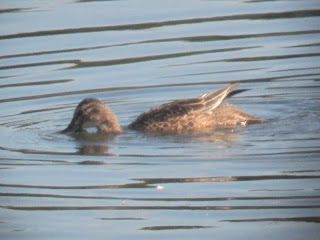 Realising of course that this was just one of those things and we had to make the best of the day, we decided to go to the Peacock Tower to look for the Garganeys that had been reported recently. Scanning through the Teal, after dismissing a couple of strongly patterned individuals I got onto another bird which was instantly recognisable as a Garganey (London tick 194) and showed well. This is a bird I've missed in London several times. 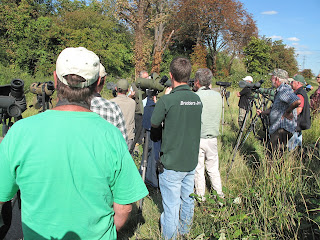 some of the Ortolan dippers

News then broke on the pager of an Ortolan Bunting at Rainham so Louis and I jumped on the tube and were checking in within an hour and a half. After an expensive Broad-billed Sand dip followed by a frustating Red-necked Phal dip I was hoping that my recent bad twitching record for Essex would be broken, but it was not to be. As we arrived we came across a group of anxious birders and we joined them, everybody's anxiety turned into boredom and acceptance of a dip after a couple of hours and the crowd slowly disintergrated. Four Spotted Flycatchers were ample entertainment while we were waiting though. A quick check of the river before getting a lift back with Mike Spicer of Beddington produced nothing more than 18 Ringed Plovers and a Greenshank. 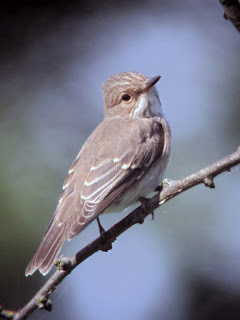 So I missed two major London birds, one as it flew over me unawares and another by a pretty short margin (if we arrived about 20 minutes earlier, or less, we'd probably have got the Ortolan). Garganey's poor damage limitation but at least I got something out of the day.