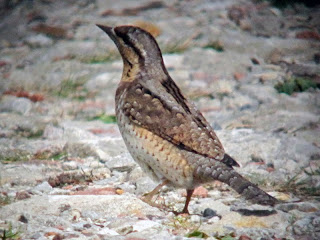 I headed to St Margaret's at Cliffe today with Phil Wallace in the hope of finding our own Wryneck or Barred Warbler but the areas we searched were dead so we ended up twitching one of the former instead, at Samphire Hoe Country Park. No precise directions were given so we searched the site and found the Wryneck by the railway, the bird was elusive at first but eventually it gave itself up and showed well on the path about 50 metres away. But this tale does not end happily . . . 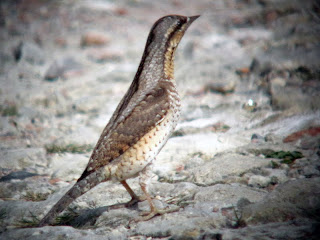 . . . other birders arrived and also got good views of the bird, only my second ever, then it chose a tragic time to fly across the railway . . . a train was oncoming at 70mph. I muttered to myself 'no no don't hit the train!', to me it looked like it just made it but others said they saw it collide with the corner of the train and everybody there heard a small 'bang' at that exact moment. We stayed around just in case the bird did miraculously scrape survival but it didn't show, it seems almost certain from what we saw and heard that the jynxed jynx torquilla did indeed meet its fate with EuroStar.

Being a softy I was quite upset and it ruined the day for me, one lady broke down in tears and it wasn't nice breaking the bad news to the excited newly arriving birders. R.I.P.