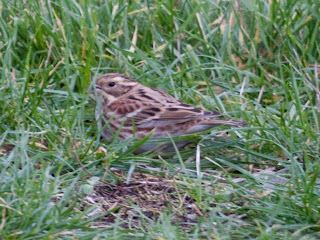 Rustic Bunting
On Friday I was still at college when I received a text from Johnny Allan notifying me of a flock of five Waxwings near Canons Farm, along a residential road off Tattenham Way. Waxwing is a bird I haven't had any luck with locally in the past and one that I wanted to set the record straight with so I was totally gutted that they chose to turn up on the one day in every six months when I had the bloody dentist! I was thankful that they at least didn't turn up within the CFBW boundaries (well, then I would have skipped the dentist altogether and paid the fee later). 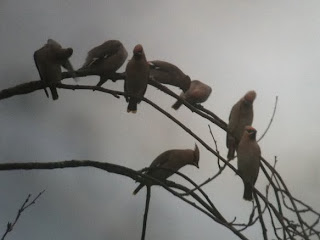 Waxwings
I caught the 6.43am S1 to Banstead yesterday and walked to the site. I got there before sunrise and had to wait quite a while before the day had seemed to truly get going. A couple of Redpolls and a Siskin or two called overhead but my quarry was not showing and I was convinced they'd departed, especially considering there weren't many berries on site compared other local places and they had been flighty the day before. Then, a flock of eleven beautiful trilling Waxwings flew into a rowan with a mistletoe hanging from it and preened at the top of the tree before beginning feeding! Wonderful! Soon, Mark, Phil and a few other local birders arrived and we noticed that one of the birds had a smartie-like tick on its neck. I hope it doesn't cause it too much trouble . . . it seemed healthy otherwise.

Today I was patching at Canons with Roy Weller, briefly joined by Andy Harding, with nothing unusual to show for it but one or two Bramblings and five Common Buzzards feeding in the fields were nice to see. A Rustic Bunting broke in Kent . . . damn. With coursework to do and four or five hours of light left I felt it best to forget it. Half an hour later Phil rang asking if I would like to join him in twitching the Bunting, I ummed and arred before concluding 'oh go on then'. He picked me up from Canons Lane and after a smooth journey we turned up at this very easy twitch that was not far at all from where we parked the car with the Rustic Bunting showing very well. Here we came across a few familar faces including Nick and Russel Gardner, Josh Jenkins Shaw and Kev Jarvis. It was a fascinating and beautiful bird to watch and was a complete lifer. I was expecting a bird like a Reed Bunting in structure and behaviour but it reminded me much more of a Lapland Bunting when it was feeding on the ground, doing an occasional low rush through the short grass.