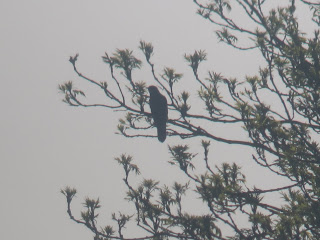 By the time I arrived at Canons, later than usual, I was in a foul mood. I had only caught the bus by the skin of my teeth and one of the wheels fell off my now trademark trolley along Garratts Lane. I was removing my valuables and preparing the trolley for its wait in a hedge for a later pick-up when I heard a Cuckoo singing. Panic ensued - it didn't sound too far away but I've never found it at all easy to pin down one after hearing it - in fact I don't think I've ever done it, I've only seen them as they've flown across or just happened to be sitting in a bush. I tried to hurry over to get a better angle on Lambert's Shaw, where I suspected the noise was coming from, and had a quick scan of the tree tops. To my shock, amazement and relief, the beast was sitting there, plain as anything - I needn't have wasted time moving around! 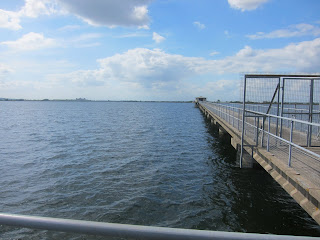 I didn't get too long on the bird before it flew off, but enough to get a look and a couple of record shots. Cuckoo is a rare bird at Canons now, with only one record last year (which I missed). In the mid 20th century there were a dozen singing males at the site annually . . .

In the early afternoon my dad took me to Queen Mother Reservoir where the Roseate Tern was clearly no longer present and not a lot else was kicking about.