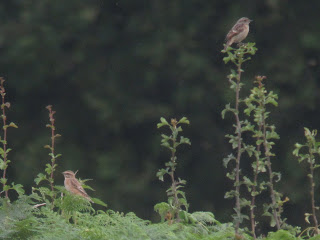 Whinchat (left) with juvenile Stonechat
CFBW pulled its fifth (or possibly sixth) Whinchat of the year, and first of the autumn, today. It was in the same hedge in which three of the others stopped off this spring. The very same hedge has been fruitful in terms of other chats, too, with Black Redstart, Common Redstart and multiple Wheatears using it this year. Today's bird was accompanied by a juvenile Stonechat, which was nice. 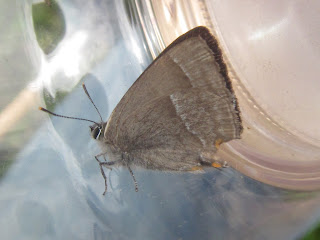 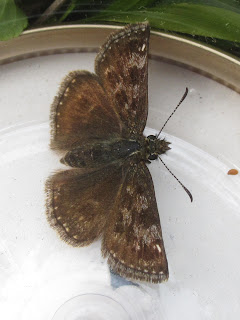 Dingy Skipper
On Tuesday I spent a day butterflying (with nets and pots) at CFBW with Ian Magness which proved a success. Our most unusual find was probably a Dingy Skipper; a species which 'sometimes' has a smaller second brood around now and is generally pretty scarce anyway. I particularly enjoyed seeing a male Purple Hairstreak and a Small Copper, both butterfly year ticks (if I kept a butterfly year list) for me. We got a quick look at something which I'm almost certain was a male Chalkhill Blue - it certainly wasn't one of those bright female Common Blues - but it was too quick for the nets and was never seen again. Another highlight was even more of a surprise, and also not a butterfly: a Hummingbird Hawkmoth appeared out of nowhere and started feeding but vanished as hastily as it materialised. 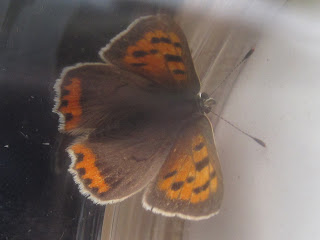