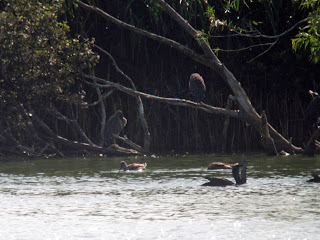 Night-herons
A quick catch up. On Sunday, Alex Bowes and I spent an afternoon in the Kent. At Stodmarsh, the pair of juvenile Night-herons was the highlight along with a Wood Sandpiper that I found from the Marsh Hide - both were lifers for Alex. We moved on to another site elsewhere in Kent where we searched for a couple of Schedule 1 breeders but luck was not on our side.

That morning I caught the first bus to the patch, in order to give it a bit of coverage before the Kent outing. A couple of Sand Martins were a very pleasant surprise - due to the lack of water this is only an uncommon passage migrant at the patch. Not long after this a flock of nine calling Crossbills passed over, heading south - very satisfying after all the hours I've been putting in over the summer, primarily in search of this species.

Yesterday I was on the phone to Roy Weller discussing how autumn migration should be slowly starting around now. Literally one minute after I put the phone away, three Meadow Pipits flew in and landed on the 'Barn Owl Barn' by the derelict one! I was watching these when I heard what sounded like a Yellow Wagtail for the second time that morning (I considered it a mis-hearing when I caught a single call an hour or so previously) - the culprit then flew over me and towards Broadfield, calling several times as it went and it was indeed a Yellow Wagtail, the first at the patch (and, I believe, London and Surrey) this autumn. This bird was again present this morning, as were the three Meadow Pipits - only they were joined by another Sand Martin! Things really are staring to move; I'm hoping to catch a new patch wader over the coming month, perhaps a few evening visits will produce the goods? 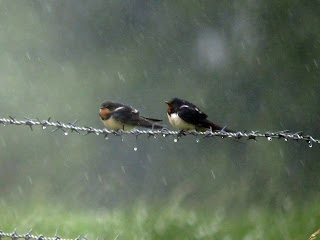 enquiry: have you noticed Swallows with white patches on the upperparts similar to this? As far as I can remember, I have only seen birds like this at Canons Farm this year.