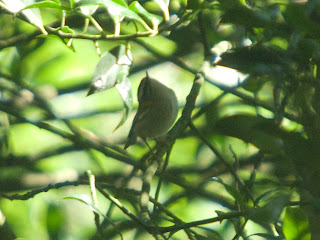 After soaking in splendid views of an adult Hobby with a freshly fledged juvenile (still retaining a tuft of down) in Banstead Woods - confirming breeding at the patch - Roy and I heard a few very faint high-pitched calls from high up in an oak. Too weak perhaps even for a typical Goldcrest call but that was what we presumed it would turn out to be. 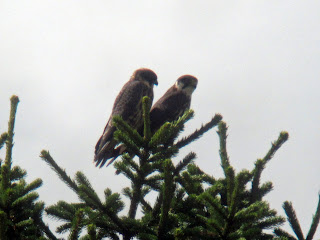 We caught a few glimpses of the bird, then it turned its head . . . 'I think that's a Firecrest!', said I. It was; we couldn't believe what we were seeing. All that extensive and purposeful searching specifically for this species during the winter and early spring, with no joy, and now there's one in front of us in early August! For a fair while Firecrest has been the only remaining 'fully expected' patch ticks for me. But this lunchtime was when I was least expecting it to happen! It was a right bugger to photograph, though, with only one or two record shots acquired. Now all birds I need have mythical patch status, like Moorhen and Mute Swan.

A reasonable number of Swallows today, with a bare minimum of sixty present.