A very quick circuit at the farm in inclement conditions produced a single ♂ Stonechat. Mid-morning, I picked up Christian C and headed to the London Wetland Centre for what turned out to be a rather profitable couple of hours of birding. Highlights were two first-winter Caspian Gulls, a first-winter Yellow-legged Gull, a Water Pipit, a Redshank, three Pintails and two Cetti's Warblers (including one hopping about on the boardwalk).

A beautiful morning was spent strolling around Banstead Woods, a gathering of four Stonechats being a highlight, along with fly-overs from a single Siskin and eight redpolls. Six Meadow Pipits and a Linnet overhead were surely migrants. 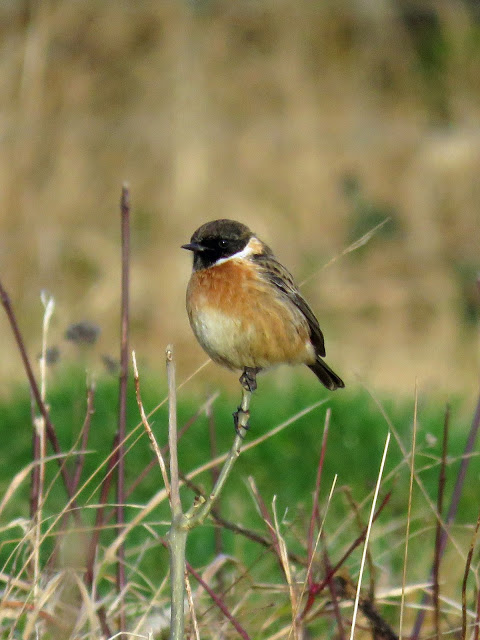 A gull-watching session at the main lake at Beddington on Tuesday was rewarded with single juveniles of Glaucous and Iceland Gulls, as well as a first-winter Yellow-legged Gull with an abnormally coloured bill, seen earlier this winter at the London Wetland Centre and along the Thames further east. There was also a rather peculiar bird which I took to be a Herring x Caspian.

With nothing else to do while Storm Doris ravaged the land, I thought I'd return for more this morning and took shelter in the hide with Kevin G. Frustratingly, the wind was regularly gusting strong enough to practically lift the gulls up off both the island and water's surface without any notice and I only managed to photograph one of the decent gulls seen, a first-winter Caspian Gull, the other two notables being the juvenile Glaucous Gull again and a nice adult Yellow-legged Gull.
A Kestrel was at home in Belmont on 22nd.

An evening walk at the farm on 19th produced three of the Stonechats that were found by others earlier in the day, always a welcome early sign of spring movement, and two calling Little Owls of note.

A morning of ringing at Beddington this morning with Kevin Guest produced a new male Reed Bunting of note, while a Water Pipit flew from the reedbed and four Shelducks were still knocking about.

The Leith Hill massive, namely Matt P, Robin S, David S, Wes A and Stu C, assembled on the lofty tower roof for 2017's inaugural '[in]visible migration' session. It was a classic blinder of a Leith Hill Towerwatch, with a stubborn, soupy mist enveloping our view and simply refusing to clear by mid-morning, at which point we'd seen enough mist and cleared off ourselves instead. Single Crossbill and redpoll calls punctuating the murk were the sole rewards for our vigil, although there was plenty time for a good bit of birding banter/gossip. I took myself off for a walk on the heathland nearby, Duke's Warren, which was a bit more ornithologically infused thanks to a singing Woodlark, a Woodcock, two more Crossbills and 115 cacophonous Siskins.

A ringing session by myself on Hundred Acre was a real disappointment for the first couple of hours or so, by which point I’d only caught singles of Wren and Dunnock, but all the wading around in sewage was suddenly made worthwhile when a Water Pipit appeared in one of the nets! Bingo! I had been hoping to catch one of these but wasn’t expecting it in the middle of a rather sunny morning. Hopefully I will catch/re-catch further Water Pipits in the future, perhaps leading to some interesting data. Also about was a Green Sandpiper, a Cetti’s Warbler, four Shelducks and a couple of Reed Buntings, including a singing male. 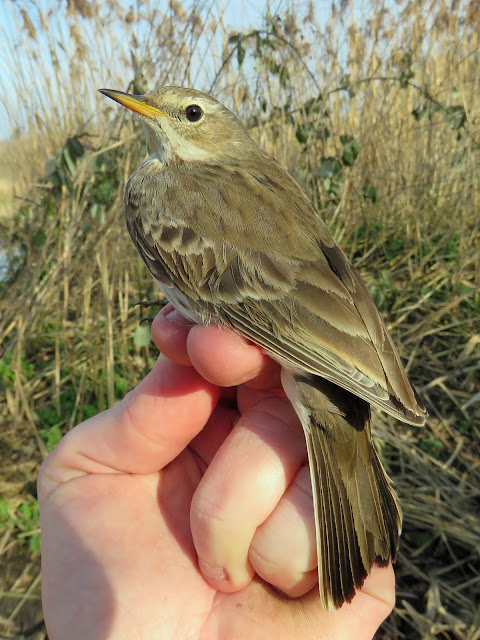 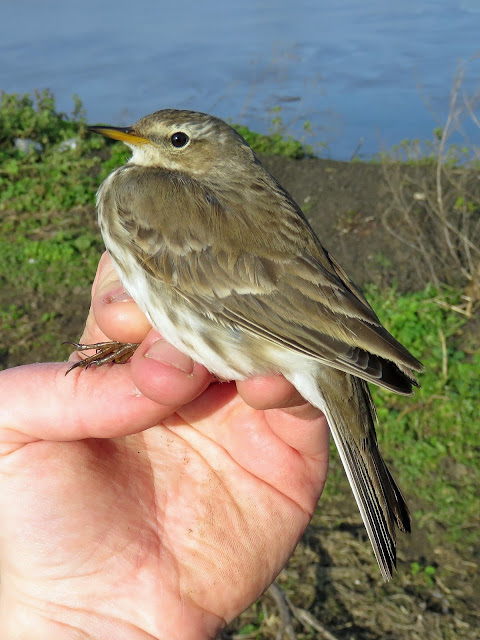 
Magnus A and Christian C joined me for a grand tour of the patch, on a changeable but mostly spring-like day, partly thanks to the first singing Yellowhammer of the year that I have heard - my day's highlight. We also located one of the Little Owls and had three Lesser Redpolls of note but once again a blank was drawn on what I am counting as my second concerted Lesser Spotted Woodpecker search of the year, though it is early days and I will continue looking. A look around Banstead Downs in the afternoon produced another two Stonechats, which by the sound of it may have been wintering in an area of young scrub, and a fly-over redpoll but a search of the traditional Firecrest site along the western flank of the golf course produced no hoped-for jewels.