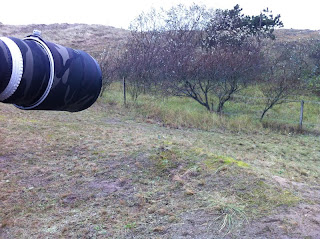 Yesterday I trucked up to Norfolk with Phil Wallace. Several birders have told me about how awful Blakeney Point is to walk but I didn't take much notice, thinking three miles can't be that bad even on shingle. How wrong I was!

It took us about an hour and a half of what was without doubt the most painful walk of my life (three miles there and back of cold, rain, wind and horrid shingle) before reaching the tiny plantation in which the confusion of a flycatcher was residing. After about ten minutes the ALDER/WILLOW FLYCATCHER (possibly even Least or Yellow-bellied still, some people think . . .) showed itself. It was a nice bird and showed quite well eventually but I really like to know what I'm looking at when I twitch something. After half an hour or so we trudged back, I thought the way back would be better - it wasn't -we did see a Brambling, at least one Northern Wheatear and a couple of probable Redwings though. 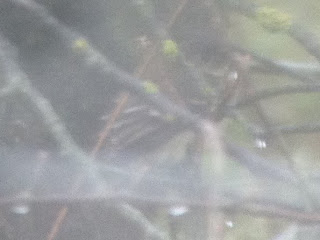 the flycatcher
Next was Kelling Water Meadows. Phil grumpily waited in the car while I rushed off to get a bird back off him. This was a very easy visit with the Red-necked Phalarope showing well with a Grey for comparison. This was a much overdue British tick, I've dipped a couple before. 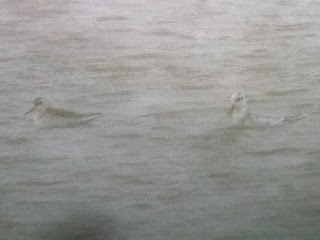 Red-necked (left) and Grey Phalaropes
I rushed straight back to the car and we were off to Wells. We joined the gathering in splitting up into the Dell and, perhaps surprisingly, we managed to locate the WESTERN BONELLI'S WARBLER. I missed a Yellow-browed but wasn't too fussed as I don't need it for Britain and I'll probably see them on Scilly in October. We then got back on the road for London, stopping off at a Little Chef which could only serve chips. We got back at about 10.30pm because of traffic.

As for the ID of the Flycatcher, I obviously have ZERO experience of Empids but from my limited research I'm putting my money on Alder. I just hope it sticks around tomorrow and somebody manages to record it.

EDIT: I've heard that the Bonelli's Warbler was heard calling as both Western and Eastern, hence smashing the apparently confirmed identification to pieces and hence removing it from my list