To the south west today with Rob 'Dizzy' and a couple of Sussex birders Micheal and Dan. I was confident that the American Bittern would still be around and was more than very keen to see this bird as I'm fond of herons and already dipped the bird when it was at Trewey Common. It got to past 9.00am and no news had come out, I started having doubts. As we were nearing the site negative news came through on the pager, I was completely and utterly gutted and my mood instantly sank. 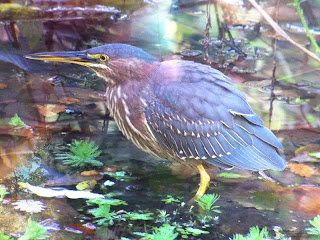 Green Heron
We thought that if people had been looking for about three hours already and the bird had been showing well throughout the week the bird had gone. We decided the best game plan would be to visit the Lost Gardens of Heligan and get something out of the day. After a bit of orientational confusion we eventually found each other again and the GREEN HERON which showed very well, better views were had than when I visited the Hythe bird a couple of years ago.

We called in at Exminster on the way back, because Micheal and Dan needed American Golden Plover. This was my third visit to the site in as many weeks and to our surprise the bird was not present, it transpired that it had moved on the Dawlish Warren (probably because of fireworks the previous night) so we headed home; the Green Heron was nice but I'm still quite disappointed about the Bittern . . . I suppose it's one to get another time . . .