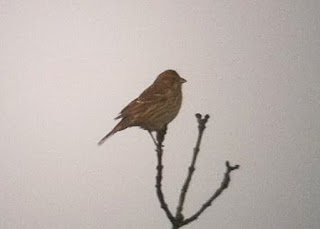 Corn Bunting
I was so relieved to return from IoW last night after two weeks away from my own home and more importantly my patch so it was with great enthusiasm that I headed out to Canons this morning. I felt on the ball and was confident that I would find something good; Steve Gale has previously proven that early November is prime birding time at the patch. 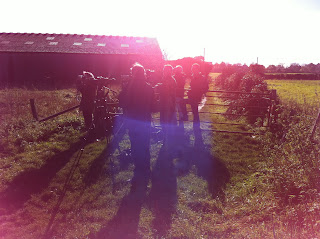 Arriving at the barns behind the farmhouse I saw a chat pop up onto the fence opposite the barns 'interesting' I thought 'too late for Wheatear or Whinchat'. I got onto it with the scope and laughed out loud when I saw it was another Black Redstart! The third record of the year! While trying to get better views of the bird I could hear an occasional loud metallic 'tick' somewhere, I didn't pay it much attention and first but looked up to see an interestingly shaped bird sitting on the top of an isolated tree. 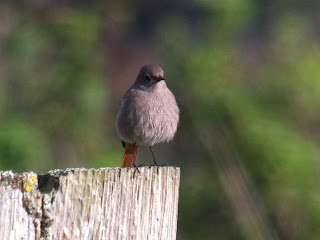 Black Redstart
I got to scope onto it and to my shock it was the 4th Surrey Corn Bunting of the century! I immediately phoned Johnny Allan and Steve Gale and the former soon arrived, but not soon enough - it was last seen ten minutes before he parked up! Paul Goodman, Paul Manville, Geoff Barter, John Hughes, Alan Wingrave and Graham Osborne all also made an appearance but unfortunately none connected with the bird. Paul Goodman found a second Black Redstart with the original bird, amazing! Corn Bunting was a Canons Farm, Surrey and local area tick for me.