On the above date I decided to do a bit of birding in London to get a couple of county ticks (more importantly, one was a lifer).

First off was the London Wetland Centre for the Spotted Crake, which, perhaps surprisingly compared to the bird I went for next, was not the lifer, just a London tick. I made my way to the Dulverton Hide, was informed as to the general area that the bird had been seen in (I had just missed it) and proceeded with scanning the bank again and again. An RSPB Wildlife Explorers group came in, and although it was very nice to see the kids were actually very keen on the birds, helping point out commoner birds like Snipe to them and putting up with the constant noise was a bit distracting. I recognised the group leader as someone related to surveys and things at Beddington.

The persistent scanning payed off with an all to brief glimpse of the Spotted Crake as it scurried along the bank, appearing from behind an island and dashing into a clump of reeds. I shouted the news out to everyone in the hide, but I knew there was no chance that all the kids and birders would connect; this would simply be too quick and elusive for so many people to connect with.

It showed briefly one or two more times, but again it was only me who glimpsed the bird. About 5 minutes after the group left, the bird appeared out of the vegetation and gave good, prolonged views at the water's edge, murphy's law for you! I'd have loved the kids to have seen the bird. Anyway, it showed well for everyone who was in the hide at the time and they enjoyed good views. It disappeared again. It showed once more before I left, this time for a very prolonged period of time and with more people to enjoy the bird. I managed a handful of awful photos and video footage but someone with a proper compact and digiscoping adapter seemed to get better results.

I texted dad to ask if we could pop over to Staines for the Red-necked Grebe as soon as he arrived back at the Wetland Centre from his little excursion and he agreed. I duly hurried over and checked the WWF and Peacock Hides, there was little of note except a handful of Wigeon, 3
Snipe showed very well from the latter hide.


Staines was good. With ease, I connected with the juvenile Red-necked Grebe which was associating with the adult Great Crested Grebes towards the west side of the north basin. This was a very overdue lifer (250 for Britain and something like 267 for West Pal, I don't really keep track of that- of course a London tick as well). In addition, an adult winter Black-necked Grebe gave untold views as it hugged the south edge of the causeway, I managed some pretty good pictures, but as I've said before I can't post these here at the moment because of the lack of software on this laptop. Also seen was a Northern Wheatear, a Grey Wagtail and a couple of Meadow Pipits. 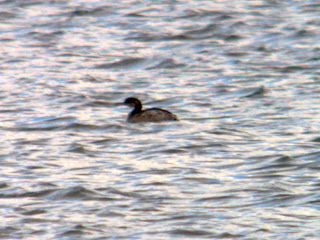