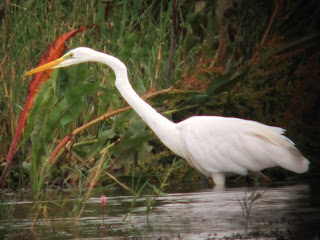 Great White Egret
Today Phil Wallace and I made our way down to Dungeness in search mainly of Herons and Egrets which the site has become a nationally famed location for recently. 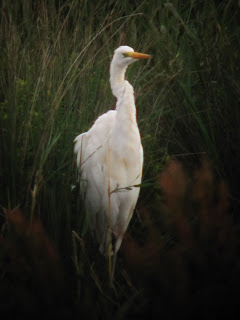 Great White Egret
We headed straight for Denge Marsh Road, where most of the action was and watched from the bridge where we instantly got excellent views of the long-staying Great White Egret as it preened. To our delight it then became quite active and flew closer where it began feeding not at all far away, right out in the open! I glimpsed one of the Purple Herons a couple of times but it popped up far too briefly for Phil to get onto it. Eventually it flew out of the reeds, gained a bit of height and flew towards the New Excavations while Phil rattled off some shots. Little Egret and Grey Heron brought our Heron list up to 4. Phil spotted and photographed a superb male Whinchat but I didn't have time to get it on camera. The Whinchat and a nearby juvenile Willow Warbler were both sure signs that passerine migration is well underway while a juvenile Tree Sparrow was a nice surprise. 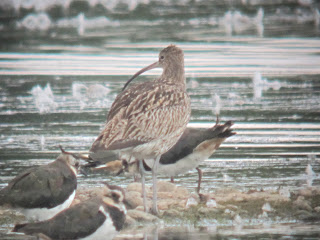 
At The Point we got onto an adult and a juvenile Yellow-legged Gull while amongst the many Common Terns were about a dozen Sandwich Terns, a juvenile Mediterranean Gull and a 2nd winter Little Gull. The sea was pretty dead, the wind having a counter-productive easterly bias, with just 4 Common Scoters, a brief Curlew/Whimbrel and 7 Gannets to show for our efforts. 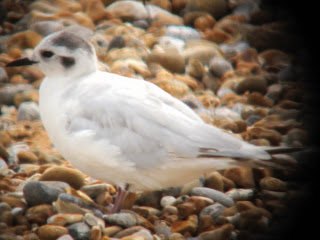 Little Gull (2nd summer)
At the RSPB visitor centre we learned that yesterday's Cattle Egret was still about and set about searching for the bird to no avail, after Phil once again failed to contend with one of the notorious RSPB coffee machines that always completely break down whenever he's around! 4 Dunlin and a Common Sandpiper were the highlights here.

We made one last attempt at locating the elusive Cattle Egret (which would have nicely very nearly completed our list of available Herons for the day, and provided a nice year tick for both of us) at Denge Marsh before giving in and heading home happy with an enjoyable day filled with some good birds.