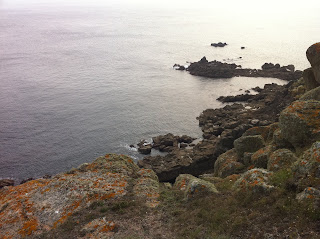 Gwennap Head
This year's family holiday, to Cornwall this time, was viciously exploited by me as a chance to mop up on one of the biggest gaps in my British list: tubenoses. Before this trip the only tubenoses I had on my list were, embarrassingly, Manx Shearwater and Northern Fulmar. After a few hours of them doing what they wanted, almost each day between Sunday 15th and Saturday 21st my poor parents kindy drove me to Gwennap Head for a nice long seawatch.

Early morning rise and a walk around the coast near our Falmouth hotel produced a 2nd winter Mediterranean Gull, c.22 Manx Shearwaters, a showy Ringed Plover, a Rock Pipit as well as the Fulmars, Gannets and Shags that would turn out (as expected) to be ubiquitous throughout the whole trip so I won't keep mentioning these species. A couple of the Fulmars had chicks on a cliff edge.

Gwennap Head finally gave up a Balearic Shearwater which cruised along with a Manx after two or three hours scanning. My first lifer of the trip and one that I was glad to finally get. A close-in dark phase adult Arctic Skua was my first of that species in a couple of years. In passerine terms a migrant Northern Wheatear was a nice sign that smaller birds were moving and a Raven flew along the cliff top. Grayling was a butterfly lifer for me. 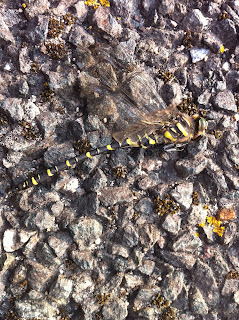 found this dead dragonfly on a nearby road, apparently it's a Golden-ringed?
Monday 16th

Early morning around Falmouth produced a Bonxie, 17+ Manx Shearwaters, a Greenshank, a Bar-tailed Godwit, 2 Stonechats and, best of all, a Tree Pipit calling overhead. A Common Buzzard flew close-by along the cliff top.

Going to Gwennap Head around midday was a mistake. I briefly got onto a couple of dark Shearwaters but because the lighting and briefness of their appearances I couldn't tell you whether they were dark Balearics or Sooties. Manx Shearwaters and Rock Pipits were noted. 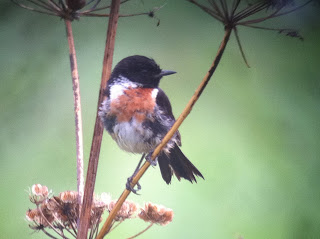 Stonechat
My last early morning Falmouth walk simply because it was exhausting me; I was going to bed at about 12.30am and getting up at 4.30am . . . not good. I really struggled to find the strength to walk but clambered up to my usual cliff top watchpoint. A Common Sandpiper called overhead in the pre-dawn darkness. It turned out to be very foggy and, other than 2 Sandwich Terns, no notable seabirds were recorded; not even a single Manx put in an appearance. A family group of Stonechats and an adult Mediterranean Gull were the highlights. 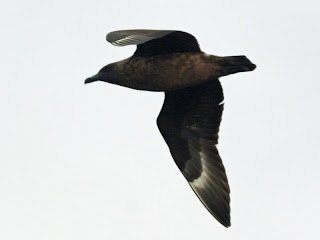 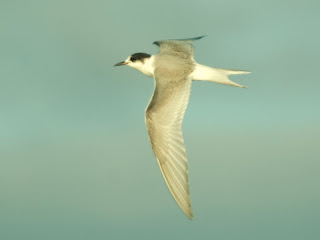 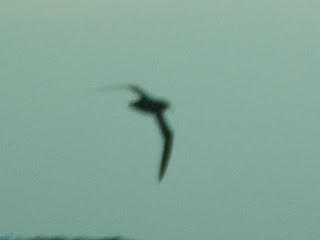 Manx Shearwater
I awoke at 3.15am after only about 3 hours sleep to leave for the pelagic. Meeting all the birders before setting sail I was pleasantly surprise to bump into James and Simeon Grundy who I've known for a few years and they were good company throughout the rather unsteady expedition. I bagged another one of my target tart ticks with several European Storm Petrels some of which showed quite well. Otherwise it was quite disappointing. 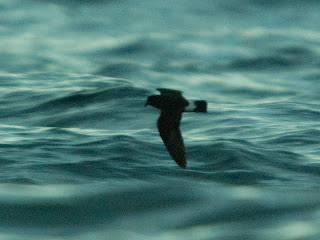 Storm Petrel
A Bonxie low over the boat provided next best bird and a juvenile Arctic Tern was nice. Very bad views of at least 2 Balearic Shearwaters were briefly had, several Manx Shearwaters cruised past but also didn't linger. One of the best bits of the trip was getting within touching distance of Kittiwakes and Fulmars. 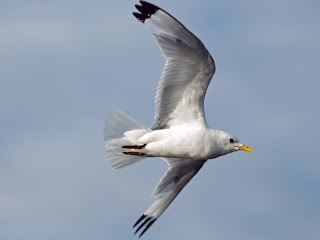 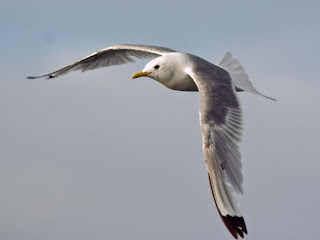 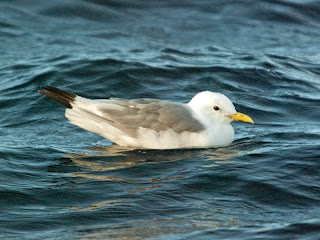 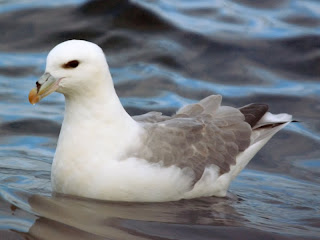 Fulmar
I bagged my final target tart lifer that afternoon with another visit to Gwennap Head when a Sooty Shearwater flew west about a mile out. The smooth, slow flight; athletic body shape and long pointed wings were obvious and when the bird banked the silvery underwing was visible on a couple of occasions when the light caught it well. 2 Balearic Shearwaters and 3 Basking Sharks ('lifer') brought a nice close to a worthwhile and enjoyable day. 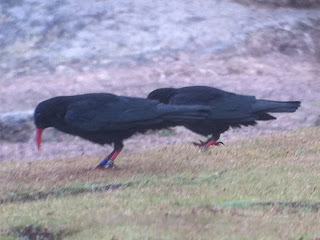 Choughs
I can't remember what the parents and I did for the first half of the day but in the late afternoon/early evening I was joined by James and Simeon again for a seawatch off Porthgwarra. A Sooty Shearwater was nice and 2 Bonxies added a bit of life but otherwise it was pretty dead with just a few Manx Shearwaters being the only other birds of any note. The highlight was a pair of very obliging Choughs on the cliff top that allowed me to get within about ten feet! Unfortunately I didn't even have my compact camera so only got a phone-scoped shot.

A nice chap called Ian whom James, Simeon and I met on the pelagic had told us about a special discount day trip to Scilly for RSPB members on Friday; we decided to ignore the advice against going that the Scillonian staff gave us and we went anyway, hoping that the strongish south westerlies would give us a good chance of a Great Shearwater.

The crossing to Scilly produced 2 Sooty Shearwaters, one of which gave good views as it slowly overtook the boat, a Bonxie, a Basking Shark and a few Storm Petrels. We had several glimpses of large shearwaters, probably Greats, but they were frustratingly too distant and too brief to identify fully.

James, Simeon and I joined up with Ian and we did St. Mary's for about 3 hours, focussing on the Porth Hellick/Giant's Castle/Old Town area. It was really dead. A few Greenshank, a Common Sandpiper, a couple of Rock Pipits and Sandwich Terns and good numbers of Ringed Plovers and Turnstones were the only species of any note.

We boarded the Scillonian back to Penzance, confident that we would get something good on the way back . . . we spotted a Basking Shark as we were just leaving the islands and kept scanning thoroughly throughout the crossing back, with James and I covering the left and Ian and Sim scanning to the right; despite our efforts we didn't see much. A Sooty Shearwater bobbing in the water by the ferry was a nice surpise and a Balearic Shearwater with a few Manxies was the only one of the day. Quite a few Storm Petrels passed by, many too briefly to be fully scrutinised . . . that's about all we saw . . . disappointing but it was nice to spend a day on Scilly anyway.

My final full day and my final Cornish seawatch for what will probably be quite a long time and it ended with a bang! I joined Sim and James (who'd been there since about 6.30am when they could hardly see anything for the dense fog!) in the late morning and soon began seeing birds. At 2.20pm Sim picked up a large shearwater just beyond the Runnel Stone buoy; John Swann, the rest of the Seawatch SW team and James and I all got onto quite quickly and we all agreed that it was a Great Shearwater, nice! My 4th lifer of the holiday, bringing me to 281! Apparently a few other people from Hella Point also got the bird.

My personal totals for this final and rather eventful seawatch are as follows: 1 Great Shearwater, 7 Balearic Shearwaters, 1 Sooty Shearwater, 2 Arctic Skuas (pale and dark adults), 3 Bonxies, 1+ Storm Petrel as well as several Kittiwakes and Manx Shearwaters. The 2 Choughs from Thursday, a Whimbrel and a Rock Pipit or two on/over the cliffs also helped to make the day a memorable one.

Had breakfast and left for home pretty much straight away, happy with a successful trip which bumped my British list up by 4. Mum and dad were quite happy too because before the late afternoons/early evening on most days they didn't have to chaffeur me around and could do what they wanted for a change. On the way back we drove through the picturesque town of Port Isaac, which is where Doc Martin is filmed, so that was quite interesting.

Special thanks to my dad for driving me to Porthgwarra almost every afternoon and getting up very early to get me to the pelagic and to James and Simeon Grundy as well as Ian from Lancs for their company and generousity in terms of crisps and lending money etc. Thanks also to John Swann for being to helpful and welcoming at Gwennap and Paul Freestone and the skipper for the pelagic.

Do take a look at the Seawatch SW website