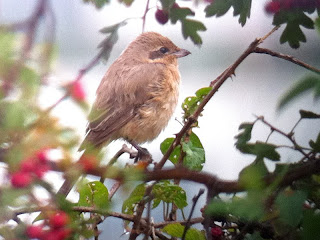 Isabelline Shrike
I nailed two good birds today thanks to Rob, who I met at Canterbury after getting the train from London Victoria. After about twenty minutes of waiting at the viewing mound at Grove Ferry we got reasonable flight views of the WILSON'S PHALAROPE as it surveyed the lake, very nearly landing in view (but ended up dropping down out of view in the corner). Other birds noted at Grove included Spotted Redshank, Ruff, Cetti's Warbler, Sand Martin and Marsh Harrier. 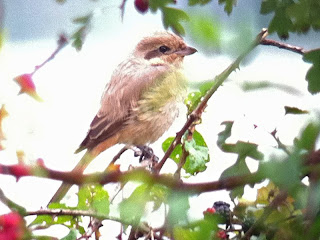 Isabelline Shrike
At 11.00am we left for Gosport for our next target but we were heavily delayed by about three bouts of nightmare traffic. On arrival it didn't look good; it was raining and people were standing ridicously close to the isolated area where the bird was staying. Then, Rob gave the shout 'I've got it, on the fence between the two bushes!' and I, and everyone else, was soon on the stonking adult female ISABELLINE SHRIKE (Daurian race isabellinus). The bird itself was quite obliging, staying put in relatively clear view for a good few minutes on both occasions that it showed it was just people's heads getting in the way that hindered my views. We then headed home, happy that we had seen two good birds in a day.

Many, many thanks Rob for your very generous lifts today!