Hen Harrier
As I arrived at Canons Farm about an hour defore dusk I was questioning the point in having made the effort to visit, that was until a stunning male Hen Harrier flew in front of me! I had it in the bins for about a minute; it was just sublime. With not much light left I immediately rang the two people who would be most interested, Surrey year lister Johnny Allan and co-patcher Steve Gale. Steve couldn't make it but Johnny came over as soon as he could. As he arrived I had just lost it when it flew into the next field, but soon Johnny picked the bird up again and we had good views of it drifting across the field before it dropped into the grass not to be seen again, unfortunately for Mike Spicer who arrived five or ten minutes too late. Hopefully he and a few others will get it first thing tomorrow. 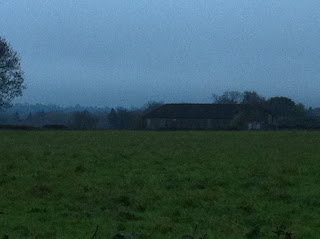 the field it roosted in - the pale dot in front of the barn is actually it!
Johnny and Mike then shouted, momentarily thinking they had the bird again but we soon realised it was a Barn Owl, disappointing for Mike but unbelievable for me! Two patch/London/Surrey/local area ticks in less than an hour - it more than makes up for missing the American Bittern!

The Harrier was an excellent way to get to 200 for London and the Barn Owl brought me to 201 for London, obviously, and 94 for Canons. A perfect evening.