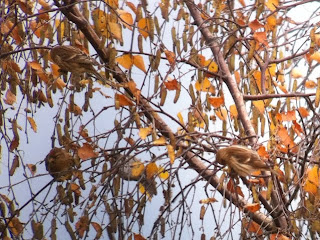 Common (Mealy) Redpoll (bottom right) with Lesser Redpolls for comparison
I tried yesterday for the Common (Mealy) Redpolls that had been seen with huge numbers of Lesser Redpolls local to me at Headley Heath. Phil Wallace picked me up after college at 3.00pm, when on site there was little time left before sunset so we had to act fast. I picked out one bird which I was sure was a Mealy, but it disappeared too quickly. Then all the Redpolls disappeared . . . drat.

Luckily today it was my only free study afternoon of the week which conveniently coincided with dad's only free afternoon of the week. What luck, eh? Shortly after 2.00pm I was on site with Johnny Allan and Kevin Guest enjoying the spectacle of roughly four hundred Redpolls feeding and buzzing in the trees, occasionally flying over us all at once. One or two Common (Mealy) Redpolls were picked out promptly and photographed; the other two had located double figures of his species amongst the Lessers. If this isn't a record for London/Surrey it must certainly be up there. After enjoying the birds for a while they were startled and disappeared, John and Kevin left for home and I did soon afterwards, content but with the thought of the many pages of geography coursework that had to be done by tomorrow very much in my head (I've just finished it after five hours almost non-stop typing).

Much credit to Steve Gale for locating the flock!