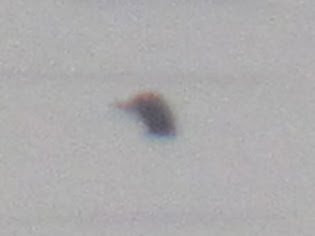 Pacific Diver head (though it may as well be a tea leaf!)
Rob 'The Hob' Stokes picked me up at about 4.20am and we headed down to Cornwall in search of the Pacific Diver that has been seen for a few days. We started to muse as to what the first bird of the year would be and to our surprise it turned out to be a Barn Owl which flew across the M3 at 5.30am. Blackbird and Robin were added an hour before sunrise and a very quick bird dashed low across the road which was most likely a Woodcock but we didn't get enough detail on it. Birds such as Lapwing, Common Buzzard, Pheasant, Sparrowhawk and Rook were also added on the journey. 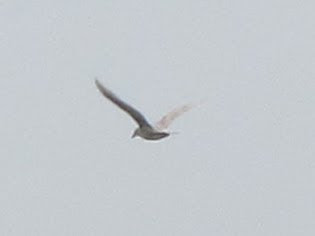 We arrived at Marazion at around 10.00am and immediately got onto a single Red-throated Diver and a couple of Great Northern Divers offshore along with Guillemots, Shags, Gannets and that sort of thing while waders included Bar-tailed Godwit and Sanderling amongst other things. 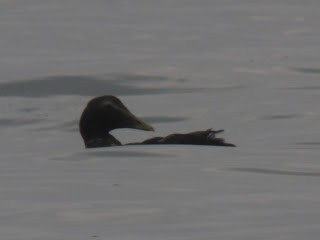 Eider
Following reports of interesting birds of the Jubilee Pool we headed off that way. Glaucous Gull, Red-necked Grebe, Razorbill, Slavonian Grebe, Eider, Common Scoter, Pale-bellied Brent Goose, Kittiwake and further Great Northern Divers were picked up here. The pager then bleeped informing us that our target had been picked up off Jubilee Pool so we headed straight over there instead of faffing around trying to spot it from where we were. 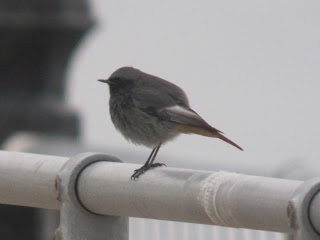 Black Redstart
On arrival we were greeting by John Swann as he was leaving, he had picked up the bird with a group of gulls coming up to a kilometre out. After a bit of anxious scanning the PACIFIC DIVER was bagged and clear views were had despite the distance. As well as its small, rounded structure the bird clearly lacked the thigh patch of Black-throated Diver and the neat chin strap could be seen at times. Quite a crowd of birders had built up by the time we left for Marazion again (it looked like the bird was drifting that way). 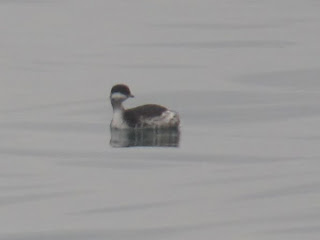 Slavonian Grebe
At Marazion we added Bittern to our lists but couldn't pick up the diver again. I won't give names but I was surprised when quite a well respected birder confidently called a Shag as the Pacific; I dropped a few strong hints but he wasn't getting it. From a slightly different spot he then picked up two relatively close Great Northern Divers and called the smaller individual as the bird, again sticking with the ID and listing all the features; I didn't know what to say. After he left I let another birder who was with us my opinion but he thought I was joking and has no doubt ticked it off. It was an innocent mistake but just shows that even the opinion of respectable birders is not something to always rely on. 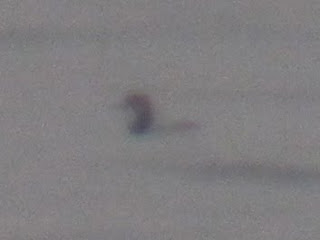 very much a record shot of the Red-necked Grebe
A quick stop at the Hayle Estuary before the journey home added a few species to the list including a group of six redhead Goosander. 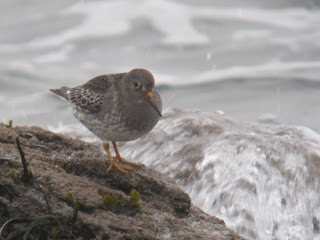 Purple Sandpiper
Tomorrow I start my Canons Farm & Banstead Woods Year List 2011 - I am determined to get to 100 this time.