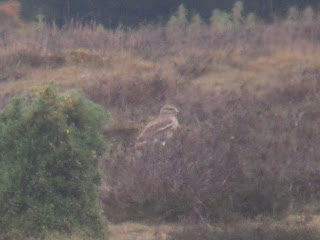 Stone-curlew
I got back late yesterday from a weekend away in Norfolk. I was a little disorientated and distressed; it meant Sunday was the first day without a visit to the patch in over three months. But it was okay as it’s late May, which is basically June, and until early August I will only have one realistic target bird in mind: Crossbill. Red-backed Shrike, Honey-buzzard and Golden Oriole could happen, so I will keep an eye out for them too. Otherwise, it’s pretty safe to leave the place unwatched for a couple of days.

Despite begging to stop at Breydon Water upon arrival in Norfolk on Saturday afternoon, the family didn't want to and it probably wouldn't have worked anyway, especially as we were stuck in more traffic than we anticipated. I knew the Broad-billed Sandpiper wouldn't stick around to the next day meaning that my tick-thirst in this bone dry spring would not be quenced and was therefore became pretty irrate.

On Sunday morning dad took me over to Breydon Water; as feared the Broad-billed Sand didn't appear and hasn't done so since. Squished a crow, nearly squished a family of Mallards. Mood didn't lighten. Stopped at Cleyspy and got an early birthday present in the form of a brilliant new pair of bins (my old pair are completely knackered e.g. both ends of the right element are so scratched that it is constantly like looking through mist; looking through the new pair is like looking through divine crystals). Tested them out at Cley on a couple of Little Gulls and recieved a free biology lesson on Kingfisher's eyes from the guy who found the Great Snipe. Family pub dinner followed, with a Barn Owl as a nice scene-setter.


Monday - slept in, a few minutes. Spent time with the family until about 1.00pm BST then homeward bound via a pair of Stone-curlews, and Lakenheath, which failed.