A tern for the worse 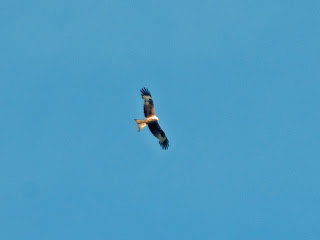 Red Kite
I've had my fair share of 'ones that got away' this year (the most painful being a flock of low waders that I could so easily have bagged) and today I added another one to my list of birds that didn't quite get clinched.

I was standing near the derelict barn when I picked up an odd-looking shape fluttering away north, reasonably high up, 'what's that?' I asked myself - bins up 'it's a tern!'. I wasted no time in getting the scope on the bird but it was rapidly heading north and was into the light, and as it got further away the effect of the heat haze only worsened. While watching it I realised that I wasn't going to be able to ID it to species 'bugger, bugger, bugger' I muttered as it grew distant. I desperately tried to make out a wedge in the wing, the length of the streamers and the shape of the head but could not accurately discern any of these features. As I was leaving later in the day it clicked - I could have easily nailed it had I paid attention to the translucency of the wing, seeing as it was into the light. When you're faced with a situation where you have to make a quick identification you panic and these things often slip your mind; you tend to concentrate on one or two features and potential clinchers don't even cross occur to you until it's too late. The overwhelming likelihood is that it was a Common Tern (which certainly would have been good enough for me) but I guess you cannot rule out Arctic with a high-flying northbound tern at this time of year. Either way, I screwed up on a patch first today.

On the bright side I got some of my best views of Red Kite that I've ever had at Canons and had a couple of Greylags go over. I was joined for most of the day by Peter 'Polo' Grady who was great company and we succeeded in locating his target bird . . .