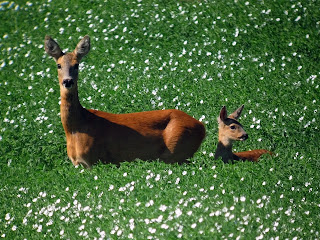 Roe Deer
Today, if I had the energy and time, I could have taken my first ever chance to go to the post office and apply for a provisional driving license, seeing as I am now seventeen. Instead, I slowly got ready and went out for a stroll around the patch. I didn't see too much bird-wise, the highlights being a migrant Willow Warbler and a showy juvenile Goldcrest.

Today was memorable for one of the first things I saw when I arrived at Tattenham Meadow. For about ten minutes I watched a doe Roe Deer and her fawn frolick through the now flowering linseed crop. I also managed to get a couple of pics of my favourite butterfly, the Marbled White, which was present in increased numbers at the butterfly hotspot that is the north end of the Legal & General playing field. There were a few small Skippers kicking about too, but only one was obliging enough for me to be able to observe the pattern at the end of its antenna, confirming it as a Small Skipper. Other butterflies present included singles of Comma, Red Admiral and Large Skipper as well as five Small Tortoiseshells and lots of cabbage whites (mainly in Broadfield). 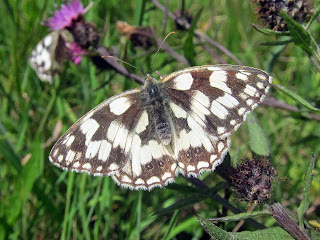 Marbled White
I also finally managed to catch up with a Roesel's Bush Cricket; a species that is rather rare nationally but apparently common in the Sutton area. 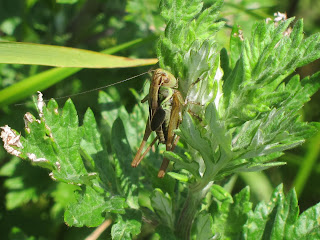 June has (as expected) been pretty poor at the patch, hence the lack of posts here. There have been a few signs of movement this month, though, with unseasonal occurances such as a singing Lesser Whitethroat (courtesy of Eagle), a flock of Lapwings and a Sand Martin. These things just about keep you ticking over but aren't anything to shout widely about.

Phil suggested a trip to Dungeness yesterday. We left reasonably early and dipped the Squacco Heron, not a bird that I need but it would have been a delight to see. We did get a few odds and sods including a Great White Egret fully draped in plumes and a close fly-by pair of first-summer Spoonbills. It was pretty cool to watch a first-summer Little Gull hawking with half a dozen or so Hobbies.

For me, though, one of the highlights of the last week has been the emergence of my favourite butterfly, the Marbled White. I was hoping to get a couple of snaps of one today to make this post look a little prettier but they were too quick. While I have always appreciated butterflies, I was reluctant to start trying to identify them until four years ago when a Marbled White dizzied my eye at Banstead Downs. A bit like how I started birding, I went and bought a starter butterfly book and identified it and my interest has since developed (with birds it was a Sparrowhawk over my primary school). 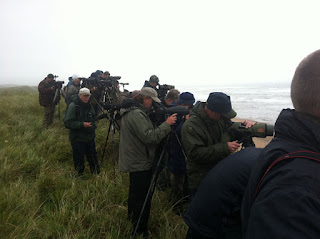 On Sunday afternoon two firsts for Britain broke within half an hour of each other, I was trying to work out what to do (I had the time, lift offer and inclination to do both but money was the only issue) when the first, the Brown Booby, made the situation a lot more managable by turning back into a Gannet.

Badgeman picked me up at 8.00pm and after collecting Mike 'Posh' Spicer and Franko, the journey got underway at around 9.30pm. We made a couple of stops on the way up for a wee and some food and were in Scotland by 2.15am on Monday. At approx 6.30am we parked up and scanned the sea at Blackdog (near Aberdeen) from the comfort of the car. The only Scoters seen were one or two groups heading south. A Manx Shearwater and a controversial Skua were the highlights there. Bob Watts passed on the news that the large Scoter flock had been located of Murcar Links Golf Club so we parked up over there and joined the surprisingly small gathering. It was a little chilly and visibility was poor. A drake Surf Scoter showed well (British tick 305). I have tried on a couple of occasions for the female at Dawlish Warren but had no success so it was nice to get a drake while looking for something else. While we were moving to join birders at a better vantage point they waved to signal that they had found the bird. Our walking turned into a light run and after five or ten minutes of confusion I got onto the 1st-summer drake WHITE-WINGED SCOTER as it associated and fed with Eiders. It dived a few times and was consequently lost for a while. The next I saw of the bird it flew around several times before pitching down close in for a couple of minutes then taking off circling at close range again and finally landing once more. It gave good views there before getting lost in the throng of other seaducks. An Osprey finished the day off nicely. Other birds seen included five Arctic Skuas, several Velvet Scoters, a Bonxie and a few Red-throated Divers. 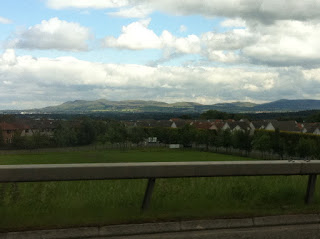 We left early in the afternoon and I got home after a near-perfect full rotation of the clock. 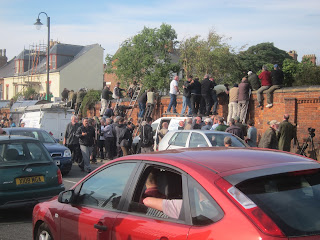 For several days in succession now I've been wanting to get on the patch but something has thwarted my plans each time. Yesterday was no different, news of a mega from the east broke in Cleveland. The only previous British record was twenty one years ago on a Welsh island when no access was being permitted due to breeding birds. It was about as mega as they come.

Johnny Allan picked me up and we headed to Wraysbury where we jumped into Franko Maroevic's car, getting from Sutton to Franko's was a nightmare and quite stressful. The rest of the journey, however, was reasonably quick and efficient mianly thanks to Franko's savvy driving.

We knew we were near when we became surrounded my grim industrial surroundings and housing estates. The news on the pager was a bit confusing at times, with John's (Birdnet) and mine (RBA) telling slightly different stories, but we got the idea that the bird kept returning to the bowling green.

Upon arrival, at something like 2.30pm, we anxiously waited for the bird to show. After a while, there was movement amongst the people on the other side. I saw an appropriate-looking bird drop down and people started seeing it there but I couldn't get onto it on the deck until I got a fleeting glimpse of a small brown thrush-sized bird as it flew up, apparently this was the bird but I hardly got anything on it so wasn't happy. A couple of hours passed and the bird didn't return. The ringer who trapped the bird had a look in the doctor's garden but couldn't find it. The atmosphere became tense and people were getting a little concerned. 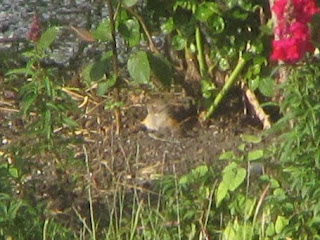 Then, a stampede ensued. I got the idea that somebody was seeing it from atop a van in the garden. A queuing system came into operation for the van and several ladders that Franko organised the loan of. This caused a bit of mayhem and some very amusing sights. I may put a video up at some point. I got a good position in the queue for the van but it seemed to take an age before my turn came around. I clambered up, scanned the flowerbed and smacked eyes upon the female WHITE-THROATED ROBIN - yes yes yes yes!!! At this time it was approximately 6.00pm and I was elated to know it was all worth it and I had my first good tick in a fair time under the belt. She was just sitting there, front-on, sunning herself. I spent about a minute up there, using some of that time to attempt to digi-bin a record shot. I did this by pointing and hoping and remarkably got one recognisable shot - I couldn't have asked for more in the end (other than a side-on view perhaps).

Then, a long journey back and I've just arrived. I thought I'd knock this out now to save me doing it tomorrow night. Off to bed now - I will have to have a lie-in this morning, it being 3.00am now, but I do hope that nothing hinders a visit to the patch late morning tomorrow.

Phil and I found this beauty on an otherwise relatively uneventful (but enjoyable) outing today. 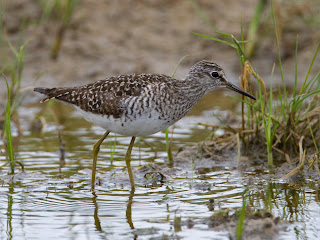 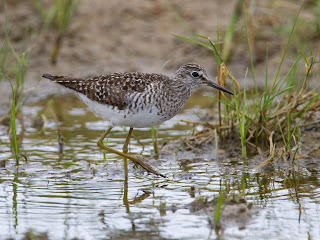 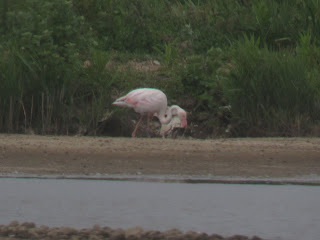 I crashed out at Rob's place last night with Dan and Michael; after watching the films till midnight we went kip (well, I didn't actually get any sleep) before getting up at 4.30am and leaving shortly after 5.00am. Mission: bag that bleedin' sandpiper. No news on the pager by the time we got there at 8.30am wasn't promising and it soon became apparent that the poxy bird was not there. How bloody unlucky can you get - it's been there 90% of the time in the last two or three weeks and the two times I have a stab at it, the bird choses to change habits. My third Broad-billed Sandpiper dip involving two birds. My first BBS dip was the Mersea Island bird last year in which I naively forked out in excess of £60 in train fares and ended up having to spend an unexpected £20 on cabs to end up on some god-forsaken mudhole with the heavens emptying their load upon me. 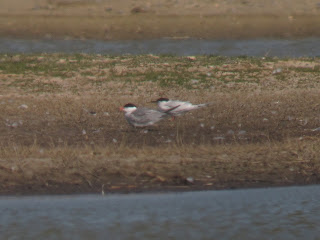 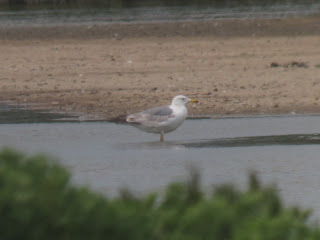 3cy Yellow-legged Gull
Anyway, we soon decided to cut our losses and get something out of the day by heading to Minsmere as Dan and Micheal needed Roseate Tern. After a couple of hours of scanning Rob and I left the pair to it while we caught some grub at the cafe. As we were walking back to the hides the pager told us the bird was still there so we discussed our relief that at least D&M had got something out of the day. It turned out they hadn't seen the bird or the message. We moved to the public viewpoint and Mike picked up a promising-looking bird. Moving one hide further on (where the light was much better) I picked the Roseate Tern up and all enjoyed views of the bird with Common Terns both at rest and in flight; it was quite superb. A pair of Little Terns and a second-summer Yellow-legged Gull were also present. We were making our way back to the car when the pager bleeped telling us that a probable Black Kite was more or less above us one minute previous. We scanned and scanned, picking up a pair of Spoonbills and a couple of Bitterns in flight but no fork-tailed raptors. 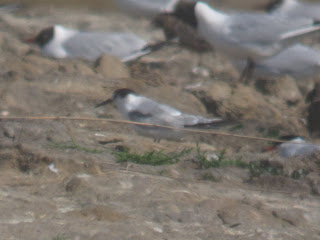 Cheers for the hospitality Rob and it was great to see you again Mike and Dan; hopefully our next twitch will be more successful!