I got a good flight view of the junco on Tuesday with Ian but really wanted to get a prolonged look at it on the deck, so I discussed the possibility of going today with Phil - he was up for it so it looked like it was on. Phil also needed the Hume's Leaf Warbler; seeing as this was the furthest site he was keen to do this first so we we followed the satnav there from 5.30am. A big yellow M at Weymouth drew us in to an assortment of breakfast delights as the sun rose. We had a look for the wafty Hooded Merganser from the car park but didn't have any luck, instead seeing groups of Black-tailed Godwits and Common Snipes which wasn't too bad a start.


Wyke Regis was very popular today with hopeful birders popping up around every corner. My friend the Richard's Pipit showed well in the bridging camp and we were amazed to see a good seven hundred or so strong flock of Brent Geese - one being a 'Pale-bellied' that I picked out. I pointed out a couple of Med Gulls and each time I looked I saw more and more. The last time I had a rough count it reached around or beyond ninety birds. But I didn't have time for precise counts. There was lots to do. Notwithstanding an hour or so of staring at bushes in the company of several other guys we did not hear nor see the warbler which was especially annoying as I had no problem seeing it in far more calamitous weather on Tuesday and it was reported both before and after our hunt.

It was past ten and we needed to go. Discussion settled on heading for the junco. The car park was far more suitably packed than Tuesday morning (when Ian and I were one of two cars there for quite a while - and the other car was a dog walker). We joined the main line of tripod legs and enjoyed great views of the DARK-EYED JUNCO after about twenty or thirty minutes of trying to see through the hordes of kip-kippy Crossbills. We got a couple more looks before a little bit of a gap then we watched it foraging under a carpet of twigs before flying out and feeding right out in the open on a fallen pine - gorgeous! It shuffled over to the other side of the trunk and, realising that daylight was running out and that we planned to visit three more sites...we got out of there.

First: Blashford Lakes. Phil wanted the Ferruginous Duck. We looked and saw lots of Tufted Ducks and Pochards but not the quarry - as apparently lots of other people already had. A singing Siskin was nice.

Ok, it was decision time. We could either race over to Wyke Regis for another go at the Hume's for Phil, getting to the bird's roost spot just before dusk, or go a few miles to get Blue-winged Teal for me. Phil selflessly decided to go for the latter... both were probably doomed to failure. There were lots of birders at Longham Lakes but apparently no-one gave a rat's arse about the Blue-winged Teal, they were all after the pair of Smew that had been found. I couldn't quite understand this because there are several Smew knocking about the area and the Lakes would be doing well do have a patch crew that big. Anyway, we saw the said pair of Smew which were very nice, and I caught a redhead Goosander fly in just before dusk. A Kingfisher flew about, there was a good variety of common wildfowl, a lone Lapwing and that was all. Day over. Thanks Phil for a good day out! 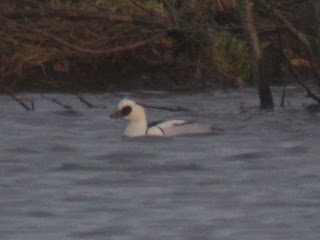