I ended up going by train (for a change) to New Brighton today for the Little Swift. As a public transport hater it wasn't pleasant, but it got me there. I'm now pretty knackered.

Andy Holden put me on the LITTLE SWIFT when I arrived. It kept distant over the river most of the time but, in the near-on two hours I was there, did come very close on about three occasions (sometimes whizzing low over the crowd's heads). I find swifts and hirundines to be some of the most amazing birds so I really enjoyed watching this exciting bird hawking around - it's been on my special wishlist for some time. The large white throat and rump really pierced the hideous 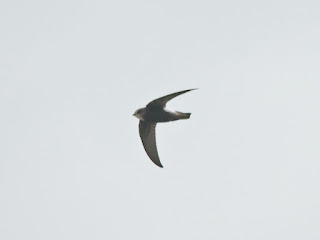 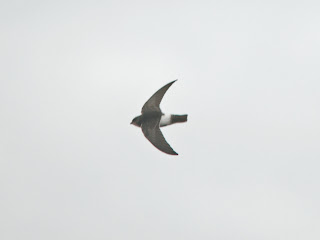 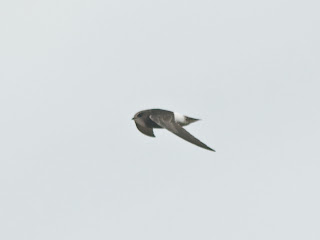 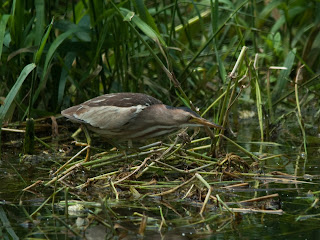 Great to finally see one of these gorgeous little herons today (and in the LNHS area!) on the river by Stocker's Lake. A female bird, the LITTLE BITTERN showed well just across the narrow stretch of river, creeping around in the reeds, suddenly lashing out at small prey items (usually little fish) and performing right out in the open for a few minutes at one point.


This year waterbirds have totally and utterly screwed me over at Canons Farm. First hit was a Whimbrel which Steve Gale had in April, this was shortly followed by an absolute killer record of Roy Weller's of two Black Terns flying through. I was frustrated about the first but a few people will be able to tell you how utterly gutted I was about the terns. A bit of relief and I actually saw a few good patch birds. Today I thought I had little to worry about, going to college, as surely nothing would turn up in June. Several pools have been resurrected, actually becoming more impressive than they were a few weeks ago, but time of year surely meant they couldn't do much damage. Then a call came through from Roy this afternoon 'I've got a wader', turning into 'It's a bloody Green Sand, I've just flushed it'. Buggeration. I rushed over there as soon as I could, hoping it had come down again to one of the many small pools but exhaustive searching yielded nothing.

Waders at Canons Farm are absolute golddust. Woodcock and Lapwing are the only ones that you can expect to see any numbers of, and the latter is sporadic and always notable, with months between sightings sometimes. A proper wadery wader, and on the deck too, is an opportunity not to be missed. Sorely disappointed, I am, but there was nothing I could do about it. These things happen. I'd rather Roy recorded it and it went down on paper than it went completely undetected. Quite an extraordinary record really, and a reminder that these pools really can deliver the odd treat - who knows, maybe Garganey or Wood Sandpiper (or better) could happen if the floods occur at the right time of year and under the right conditions. Very well done to Roy - he played it right, coming to see if anything was on the pools, and it payed off!

I did see a flock of ten Mallards on one of the pools, though. My highest on the deck count. Also a Grey Heron flew up from next to Piddly Pond. A Hobby flew low over the farm.

Last Monday I took Alex Bowes for a day birding in Kent, we didn't find anything great but a selection of interesting birds were seen. We started at Dungeness where about half a dozen Manx Shearwaters and a Black Tern were the highlights plus Cuckoo, Hobby etc. Grove Ferry and Stodmarsh produced two Turtle Doves, about four Cuckoos including a hepatic bird, a Barn Owl, at least one Bittern, three drake Garganeys, a couple of Bearded Tits, a Common Sandpiper, three Wigeons, plus a handful of Ringed Plovers, Greenshanks and Redshanks.

All photos from Grove Ferry/Stodmarsh...

Today a trip up north was a great success with the ROLLER showing very well (although looking very wet) - nice views flying, feeding and resting so cheers all round. Also called in on was the Marsh Warbler at Blacktoft Sands RSPB which gave itself up far more easily than the bird at Rainham that I tried to see yesterday - sadly this bird flew out of view just as I had my finger on the shutter! Two lifers in a day... cool!

The patch has, as expected, been slow. Loads of ruddy Red Kites, great birds but when's my Honey-buzzard coming? Got another view of the Legal & General Tawny Owl juv on Thursday, a lot more mature and very adult-like now.


Also last Saturday (26th), Ian and I popped down to Northward Hill RSPB for the Greenish Warbler, we heard it but didn't see it. This bumped my heard-but-not-seen British list to two, giving Bee-eater some company. We did, however, score with the two White-winged Black Terns at Stodmarsh later in the day, where a Bittern boomed, a Cuckoo called and Hobbies hawked around us while a Little Stint and a couple of Wood Sandpipers were nice in the wader department.

Also very very late but I never got round to mentioning a little trip to Oxfordshire involving my mate Liam back on April 28th, where the Dotterel at Balscote and the flock of six White Storks at Standridge were successfully twitched. 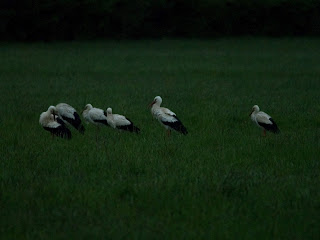 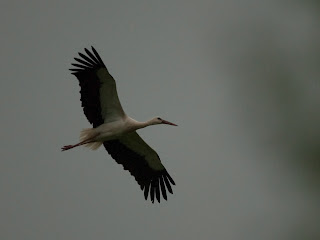