A rare wheatear as I desert the region

This morning preparations before leaving for the Isles of Scilly included packing and a quick check of the patch, although the alure of a male DESERT WHEATEAR on the beach at Worthing had been dashing down there, especially after seeing Jake Everitt's photo of the bird on Twitter. Being a bit of a packed day I only had time to drive down, have a five to ten minute look at the bird and dash back, which was frustrating as it really was a stunner and showed stupidly well. Even in my short window I got some decent record shots and a little bit of video.

Here's a phone-scoped shot for now, I might be able to get the SLR shots (if they're any better) and video up at a later point...

This SIBERIAN STONECHAT at Birling Gap today was a real performer and good ID lesson, showing off its features at little more than 10-15 yards at times. This was the first time I've done some non-local birding for six weeks now! A Whinchat, a Raven and three Swallows added interest to the afternoon. I gave the patch a good go in the morning, with a/the Ring Ouzel and a/the Reed Bunting being the highlights. 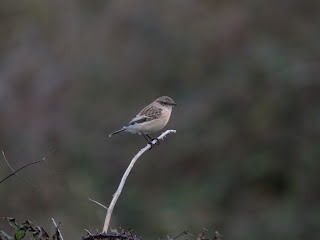 A reasonably productive day at the patch, with one of the Ring Ouzels still hanging around and showing well, a Reed Bunting, a couple of Bramblings knocking about and George the Red-legged Partridge as well as numbers of Redwings and Starlings passing west and south-west along with a handful of Lesser Redpolls, Siskins etc. What will tomorrow bring? 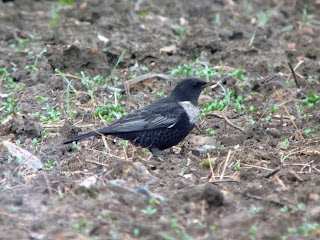 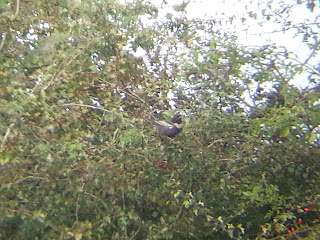 Canons Farm was oozing Ring Ouzels today with four present today. I found one by Canons Farmhouse when I arrived this morning, then when walking about with Steve and Ian, Steve picked up three dropping down at Legal & General. These stayed for a while but became elusive. A visiting birder put in the time to find them and eventually saw four birds at the playing field before they flew north! Today was the first time that Ring Ouzels have been documented in autumn at Canons Farm, and four birds is some style for this to happen!

Marsh Tit today brought my patch year list to 103, equal to my finishing total for last year. Had I been in the right place at the right time a bit more this year and got everything I've missed, I'd be on 110, but that's impossible. I hope to get 105 at the very least by the end of the year, preferably more like 107 or more.

The bird was calling after sunset in heavy fog along the southern edge of Ruffett Wood, presumably a pre-roost chatter (it sounded like there might just have been two birds there). Alarm bells rang straightaway but to make sure I played a recording - the bird came out straight away and showed well for a few seconds before disappearing and falling silent as darkness quickly fell. Sadly, although Marsh Tit was a breeding bird here less than five years ago there was only a brief record last year, and a further single record in 2010 so they're now a great rarity. I wonder how many more I'll see at CFBW...

Today my phone lost the capacity to make or receive calls and texts after about 9.30am. This was not a good day for that to happen. I was sitting on the bench overlooking the Chipstead Valley for an hour or so in the afternoon, blissfully unaware that Steve Gale was watching three Woodlarks near Ruffett Wood and desperately trying to call me. I'd been switching my phone off and on throughout the day to try to kick it into gear and the best that this would do was occasionally cause a voicemail to pop up - this time there were voicemails from Steve, and Roy Weller (who'd phoned to try to pass on the news). I knew I wasn't going to like what I was going to hear, especially as the voicemails had been left around an hour previously, and upon playback I cursed my bad luck and my phone's uselessness and made my way as quickly as I could back to the farm, not sure exactly where Steve was. Eventually I found Steve, who'd been joined by Roy and Paul G and the news was negative, the Woodlarks had flown and hadn't been seen since. Shit! Over the course of the afternoon birders checked as many fields as possible but time quickly ebbed away and the light faded. The last two fields I checked as the sun set were probably the most likely fields for the larks to end up in, in hindsight, and I wish I checked them first.

Darkness fell and I made tracks for the farmhouse, where dad was picking me up. I stopped by Harrier Field (perhaps more apt for it to be named Owl Field) and kissed the back of my hand a few times to draw any owls in. Sure enough, a Barn Owl came to investigate (the first since March) and as I watched it hunt, another owl, which appeared darker on the upperparts, briefly tassled with it before vanishing into the gloom almost as quickly as it appeared. Damn, I've been after Short-eared and that could well have been one. I'll stake it out tomorrow evening in the hope of a repeat performance.

I'm hoping even more that the Woodlarks will hang around till tomorrow morning. They aren't particularly against staying put for two or three days in places like Canons so fingers crossed. We'll see in the morning. 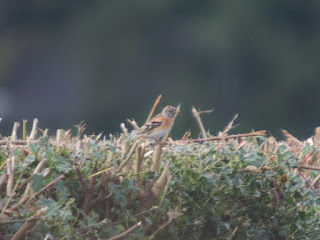 Brambling is the bird which arguably started the birding scene at Canons Farm. Steve Gale's discovery of a flock of 1,250 birds in early 2008 attracted many visitors to the site (including myself) and generating much interest from far and wide, putting CFBW on the map. Although it was a while until I took it up as a patch, I instantly fell for the site and its potential. It was big area of countryside and the seemingly endless stretching fields, bordered by fences and hedgerows and there was much to explore. No fields had names at the time and it was all unfamiliar; as I walk the patch now, I perceive it in a very different way back then. Occasionally, finding myself in an unusual position makes me see it how I used to, which feels a lot more how the birds see it - the farm itself being a gently rolling open expanse interspersed with an attractive tangle of hedges, barbed wire and clumps of vegetation.

Anyway, although such huge numbers are an exceptional occurrence, the farm usually supports at least a small population and it's one of the more reliable Surrey sites for catching up with this northern finch. Last winter was very poor and I haven't seen one since November. Andy Downing found a single in Heathside aka Dotterel Field yesterday and I had a look in the afternoon, post-college but had no luck. Today, however, I found the Chaffinch flock again and, eventually, pinned the Brambling down - it showed quite well in the end, very near Canons Farmhouse. This is by far the commonest bird that I still needed for the patch year and represents number 102 on my patch year list, the title of tartiest bird now going to Short-eared Owl, which I'm hoping I'll pick up in early November, if not before.

An addition to my patch year list on Friday, this Reed Bunting. It showed again the next morning but both appearances lasted no longer than twenty seconds. This is the third record at the patch this year and the other two birds showed for about ten seconds. A bird you really have to be in the right place at the right time for.