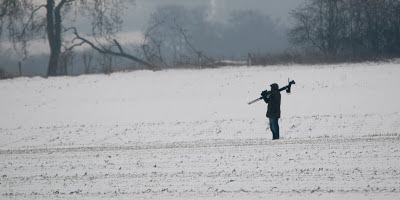 There was a lot of snow today left over from yesterday. Yesterday was pretty poor for birds but at least the farm had six Lapwings, today it had absolutely ziltch. There were more birders than birds today and one Grey Heron was the best for my eight-and-a-half hours of skywatching while Beddington was a raptor and plover wonderland. I can't say 'it was nice being out anyway' because it wasn't - it was very cold and very boring (apart from catching up with Steve, the two Ians, Jamie and P-Go). Canons doesn't seem to ever get the number of dispersing Lapwings and Golden Plovers that Beddington does in cold weather, but then again neither does virtually anywhere else in Surrey and London. I guess it's because Beddington appears even from a distance as what it is - a large wetland area which is going to draw in curious and desperate birds from far and wide in such conditions while the snow-covered fields of Canons Farm, in these circumstances, just blend in with the rest of the surrounding barren countryside and urban spawl which offer no hope of feeding opportunities (and probably look similar to the very areas that the plovers have abandoned). The farm does get some kind of movement of these birds before and after the snowfall, though, as was evident this week, probably because in these preceding days the open, invertebrate-full fields look rather appealing. It's just a little frustrating not seeing anything at all while such spectacular escape movements are going on just five miles away!