Flycatchers and a Hairstreak

The patch is continuing to prove productive. Yesterday I was joined by Richard Draper and we found a new Common Redstart along Slangs, quickly followed by a Spotted Flycatcher which was most appreciated by both of us. This is the only Spotted Fly I've seen in Britain this year and it's always great to get them on the patch in the autumn. Also yesterday a couple of Sand Martins in with a small number of hirundines, and a Wheatear at Reads Bottom while a Hobby flew over The Scrub.


Today was pretty much just as busy at the patch although I saw less of what was on offer, missing both of the flycatchers (which were both found by Ians!). Ian Ward found a Spotted Fly by the side of Broadfield and Ian Jones scored with the patch's third ever Pied Flycatcher in Banstead Woods, a species that I have had firmly in mind for finding in recent days. I didn't actually get round to having a proper look for the Spotted but I made a point of looking for the Pied, sadly though it vanished with the tit/warbler flock it was seen with before I arrived at the scene. In the evening, while walking to the pub with Paul Goodman, Peter Taylor and Linda Mount, Peter spotted a Tree Pipit which showed well on the wires for a few seconds before flying off silently. In the morning a Yellow Wagtail called loudly overhead while I was checking the bushes in the farmyard, shortly after the first Meadow Pipit of the autumn finally squeeked away by the lane.


A really exciting moment came late morning today when I happened to clap eyes on a beautiful female Brown Hairstreak by the Pages Acre horse paddock. I had just been on the phone to Graham James about maybe coming down soon to see this species at Holmethorpe so the timing was brilliant! This is the first record for the patch and the 33rd species of butterfly recorded there, which is pretty decent if you ask me! An elusive, sedentary species that survives in small colonies, it's likely that the butterfly represented a member of an undiscovered colony that we'll hopefully see more of in the future... 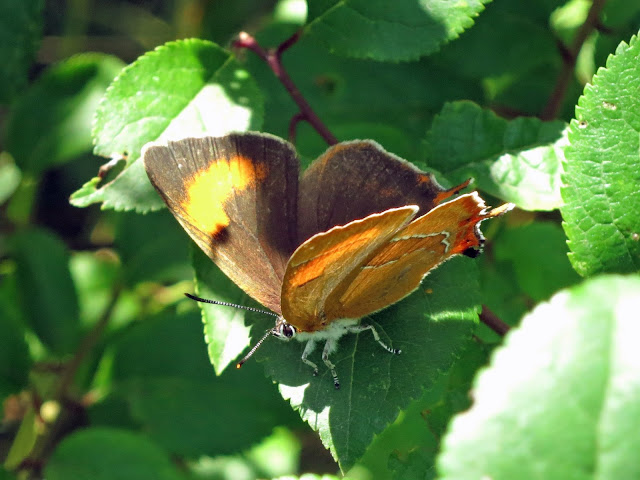