An evening walk was perhaps a little too drizzly for any Barn Owls but two Little Owls were very vocal and a ♂ Tawny Owl also announced itself. A good flock of 25 Meadow Pipits was also bombing around.


It was a dank and drizzly morning so I only did a short circuit of the core part of the farm but this was rewarded with an unexpected Reed Bunting calling as it flew around near Reads Rest Cottages, but it refused to settle. 18 Meadow Pipits were another sign of movement. I was delighted to hear my first singing Skylarks and Chaffinches of the year, despite the conditions.

I had a slightly lazier start than usual to recover from the Shetland trip before I recalled my half-hatched plans to nip down to north Kent, picked up Paul S and headed down the motorway. After a couple of hours of waiting the male Pine Bunting presented itself atop a little bush just by the area that the local wildfowlers had seeded. After a few moments, it dropped down then made another brief appearance in a distant hedgerow. Brilliant! The area was great for a bit of general birding, with highlights including two Greater Scaup, a fly-over Brambling and a couple of Corn Buntings, along with tonnes of Wigeon and Shelduck on The Swale.

Kevin McC picked me up at 05:00 on Tuesday morning and we set forth on the long journey to Aberdeen, passing almost every minute putting the world to rights. Naturally, we altered the route so that we could included Druridge Bay CP, a site with history for me as I dipped a Greater Yellowlegs there a few years ago. On the lake, we lapped up intimate views of the Pacific Diver as it fished actively, seemingly just in the shallows. An incredible location for such a thing to turn up, it beat my sighting of the Cornish bird a few winters back hands down. A variety of other birds on offer included a spanking pair of Red-breasted Mergansers and a seemingly healthy population of Tree Sparrows chattering in the dense bushes. Onwards we trekked, smoothly boarding the glitzy Shetland ferry in good time. After having a few drinks with fellow birder, Mickey, whom we bumped into in the bar, it was a quick tortellini then time for bed in our en-suite cabin for a beautiful night’s sleep…

The Tannoy announced our arrival at Lerwick and it was all systems go, starting with a full vegetarian breakfast with tattie scones of course. The hire car was quickly sorted, a metal tin with a primitive locking system but it got us to Sandwick in no time. After identifying ‘The Wart junction’ we soon established that the bird was not in the ‘wet field’, one of its favourites, and we started searching the dauntingly sweeping stubble field on the other side of road, which looked promising with its 175 Golden Plovers, 31 Lapwings, Turnstones, etc. To ensure we definitely weren't about to spend hours barking up the wrong tree, I headed back to the wet field, just to make extra sure it wasn’t there. A distant hollering could only have been good news and I fast-walked towards Kev, who had spotted the KILLDEER on a little puddle on the other side of the stubble field! Fortunately, it had continued idling by its chosen patch while everything else took flight. After a few minutes, it exploded into the air and let out a series of piercing cries before landing in a grassy field on the other side of the road and becoming much more lively, its reverie apparently abandoned!

With the wind strong and the bird distant, we decided to come back later. In the meantime, we checked out the Loch of Hillwell area, where highlights included four Twite and 17 Whooper Swans, and Lerwick, finding a small selection of seabirds including four Black Guillemots, five Long-tailed Ducks and 26 Eiders.

On returning to Sandwick, we instantly re-found the Killdeer, this time easily viewable from the road and giving a brilliant half-hour or so of comfortable viewing from the car before we headed back to the ferry, thoroughly chuffed.


After a swift couple of pints, which turned out to be unwise, and another tortellini dinner, we headed to our cabin for an extra early crash out. I normally have excellent sea legs but let’s just say my meal was a waste of money 30 minutes later and I reckon the beer was to thank. Getting horizontal as soon as I could, thankfully I soon drifted off and awoke after sleeping like a log. It seemed as though the breakfast announcement would surely go off any time soon but my phone was dead so I couldn’t check the time. I got up, had a shower and got my stuff together then headed out to the deck. Looking at the clock outside, it was 2 o’clock in the morning! I had 64 pence in my wallet, one penny too few to buy anything from the vending machines, and had left my keycard in the cabin. I tried to gamble on the fruit machines for enough money to buy a packet of Wine Gums, failed, then gazed blankly at a look back at the Premier League highlights of 2011. It went on to a chat between John Barnes MBE and John Conteh but by 5am I eventually felt like I could go back to snatch some more sleep. Fortunately, the drive home was a little simpler and very efficient thanks to Kevin’s excellent driving and jolly company.

A quick circuit of the outer paths of the woods was made worthwhile by a delightful flock of 16 Lesser Redpolls as well as a nice selection of the common woodland birds, including eight Treecreepers and 13 Nuthatches. Seven over-flying Rooks was a quite a number for recent times.

A whizz around Canons was worthwhile, with both of the Horse Pasture Little Owls bathing in the warm sunshine and singles of redpoll and Siskin overhead, as well as seven Meadow Pipits (which seemed to be new). It was nice to catch up with John S on the way out. Heading to Beddington later on, a Water Pipit was the highlight of a short visit.

Another visit to Hundred Acre this morning, joined by Christian C and Mark S, produced the usual suspects, namely a couple of restless Water Pipits and a brief appearance by the Siberian Chiffchaff. On the way home, the drake Shoveler was on view again at Carshalton Ponds.

Another fine day and another circuit of the farm, this time rewarded with seven Lapwings which dropped in just as I was about to drive to Banstead Woods to meet up with Darragh C. In the Woods we caught up with four redpolls, following three I had over the farm earlier (along with two Siskins). We spent a little time trying to photograph the Meadow Pipits in Hither Field which were unusually obliging.

After managing to site-tick the drake Shoveler at Carshalton Ponds on a drive-by, in the afternoon Christian C and I had a mooch around Hundred Acre at Beddington. We located the Siberian Chiffchaff and a couple of Water Pipits, and on my walk back a Woodcock flew by in the gloam (my first at Beddington!). It was impressive to see 2,000 or so Jackdaws flying to roost on Mitcham Common.

A beautiful day started at Canons Farm, where clear skies and calm conditions made for a lovely circuit with a whisper of spring in the air thanks to my first singing Treecreepers of the year and Goldcrest and Great Tit being among the other species in voice. Three Little Owls and 40 Skylarks were otherwise the highlights.

After lunch I paid Beddington a short visit to have a quick scan through the gulls, picking out two first-winter Caspians and a second-winter which I think I have seen before but was too quick for a photo. Most of the surface of the lakes was frozen again and all of the wildfowl were congregating in one corner of the main lake, including a Wigeon, a few Teal, Shoveler and Gadwall, and the Black Swan. The ice lent a hand with reading darvics, with six Herring Gull codes noted. 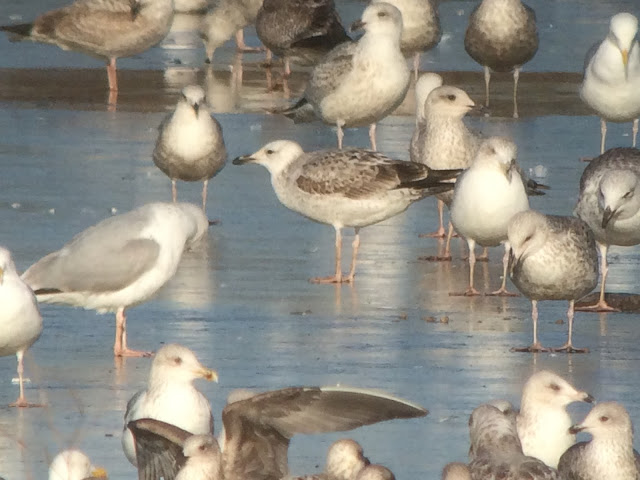 I undertook my first ringing session on Beddington's Hundred Acre this morning and it was certainly a good start. Magnus A and Kevin G tagged along for a look. 15 birds ringed, mainly in the first couple of rounds of the two nets, included a Moorhen, a Reed Bunting and two Redwings. A calling Siberian Chiffchaff caught our attention and showed fairly well while two Water Pipits buzzed around and a Cetti's Warbler called tantalisingly close to one of the rides.

A quick walk around Canons Farm in the evening was quiet, save for a calling Little Owl and 60 Fieldfares. A Sparrowhawk flew over at home.