It was a brutally cold morning and I decided against getting up pre-dawn for more territory mapping, instead snatching an extra hour in bed before heading to Canons, figuring most migrants would have been blocked by this unseasonable air system. It wasn't so bad, actually, with five Wheatears in Broadfield and a late Meadow Pipit, which was presumably yesterday's bird. Two Canada Geese flew over again. After popping home, I headed to Beddington, where the main lake ringing team was packing up and two stunning adult Mediterranean Gulls yelped overhead on my arrival. A group of four and a singleton followed, before two vocal birds appeared again low over the lake and I presumed this to be the same pair from earlier on. After local birders lamenting the dearth of Med Gull records/passage in recent years, the last few days have seen an unprecedented passage involving 42 birds since Saturday. 2cys of Caspian and Iceland Gull dropped in, too, but the latter evaded photography as overhead Med Gull calls distracted me and it had vanished when I looked back down the scope. Sedge, Reed and Cetti's Warblers were singing, three or so Black-headed Gulls were still around and a Sand Martin, a couple of House Martins and a few Swallows were seen. A Yellow Wagtail dropped in and wildfowl included a pair of Shelduck. Five Buzzards sailing into the wind and an appearance from a Peregrine ensured that the gulls and corvids were constantly on edge. 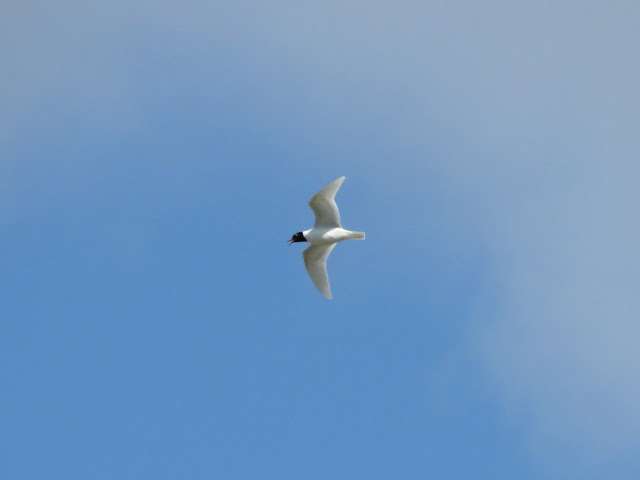