Rocking up at the Beddington hide this morning (too rainy for Canons), it was the same story of a couple of Common Sandpipers and Little Ringed Plovers on the main island. An Egyptian Goose screaming away and the drake Pochard were about the highlights, along with a Sand Martin lingering. Kojak arrived for his WeBS survey and, after the apparent finale of the rain, I headed towards the far side of the mound. After reading the short paper in this month's British Birds on mixed singing Willow Warblers, I was pleased to stumble upon such a bird in voice along 'Parkside', issuing a mainly Willow refrain with a few 'chiffs' and 'chaffs' thrown in.

Walking back across the mound, a Whimbrel flew across my sight and seemed to pitch down before shortly crossing back towards its origin by the side of the south lake. A scarce bird overall at the farm, particularly in the last couple of years or so, this was a day-maker. 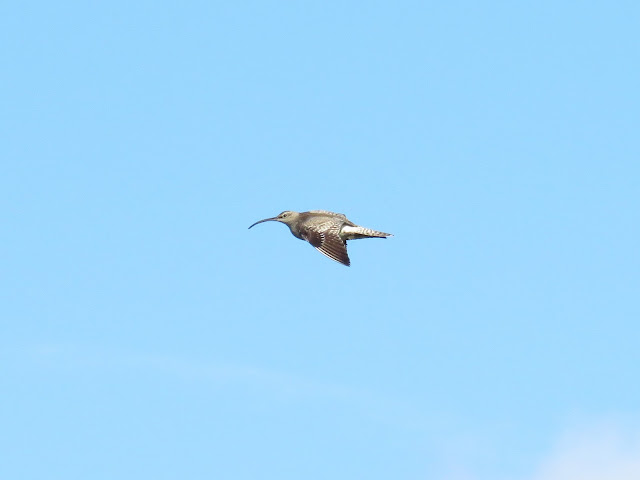 Christian C and Koje managed to catch up with it later in the morning before CC and I headed to Leith Hill, enjoying a panoply of heathland birds but the biggest surprise was a pair of Stonechats, a species that hasn't bred there for a few years.