The engine was starting to twitch the Surf Scoter found on the sea off Selsey when news came through that the flock was now heading east. This was at once disappointing and exciting. The latter emotion was evoked by the realisation that I might be able to get it off the patch. However, once I arrived at George V Avenue and saw that visibility (due to heat haze) was atrocious and most birds were moving far out, I soon lost hope. I did technically see the bird, though, at least that was the reasonable assumption when a flock of 34 what-would-have-otherwise-been-noted-down-as Common Scoters flew past half an hour or so after the bird had been reported as setting off east from Selsey with 33 Common Scoters. A mile or two out and obsured by wavy air, however, there was no chance in hell of singling out which was the surfie. Otherwise, only a distant diver, a Bar-tailed Godwit, a heard-only Whimbrel, three in-off Swallows, 18 Sandwich Terns, a 2CY Common Gull and three Gannets, then it was back home to resume work...

... but after attending to some business nearby I couldn't resist exploring Henfield Levels in the evening. What a promising area! First of all, three Nightingales were in song along one short stretch of hedgerow, including two in a half-hearted confrontation which showed very nicely. Five Lesser Whitethroats were in song, as was my first Cuckoo of the year which remained unseen. Reed Buntings, Yellowhammers, Skylarks, Lapwings and singles of Reed Warbler, Sedge Warbler, Cetti's Warbler and Meadow Pipit were also in voice. A Snipe was something of a surprise, five Little Egrets were counted and a Mute Swan was incubating. Skylarks performed over the fields, a couple of Great Spotted Woodpeckers included a drummer. As I walked back to the car in the twilight, a pair of Tawny Owls kicked off. 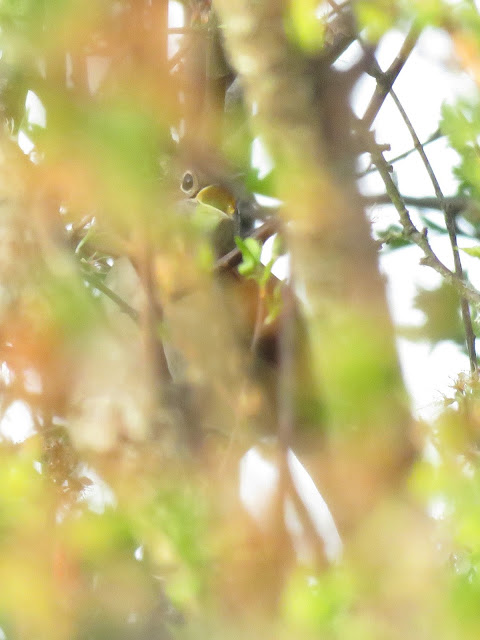