A healthy 53 species during my Sussex Winter Bird Survey in Lyminster included a Green Sandpiper which briefly alighted on a muddy farm puddle (!), a Marsh Harrier, a Chiffchaff, 418 Lapwings, a Golden Plover, an adult Mediterranean Gull, a Grey Wagtail, 55 Redwings, two Reed Buntings, four Cetti's Warblers and 16 Collared Doves. Sadly, the field frequented by the Cattle Egrets last winter has been sown as a crop and the livestock removed.

I thought I'd check out the treatment works at Patching. Parking by the pond, I crossed the road to the underpass opposite The World's End pub. At the metal gate I encountered two Firecrests, followed by an immediately striking Treecreeper. The bird appeared noticeably frosty, with clean white underparts and white shaft streaks on the mantle. The supercillium was clear white and very flared behind the eye. As (minor) supportive features, photographs showed the front claws to be pure whitish and the bill to look relatively short. It seems to fit the nominate race familiaris and this is certainly the first of the many hundreds of Treecreepers that I have which has caught my eye in this way. The warmer rump contrasted with the rest of the upperparts, while the general colour of the back/mantle and head was rather uniform. After losing sight of it, I crossed the road to the treatment works, where there were two Chiffchaffs (one in song), a Bullfinch and a britannica Treecreeper for handy immediate comparison! 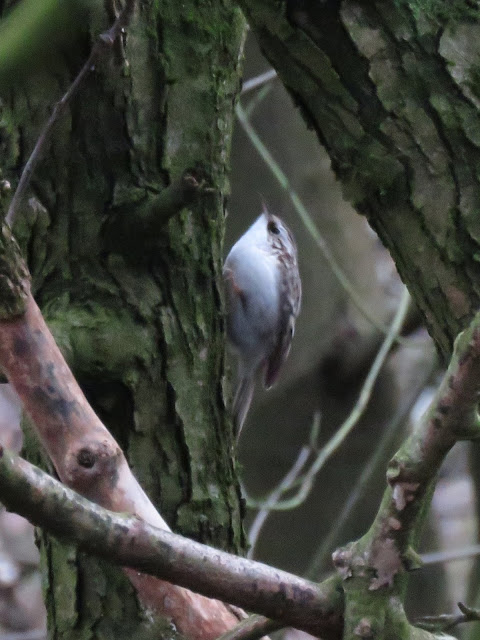 Calling in at Goring Gap for a short time in the early afternoon, I bumped into Stephen Simpson. A 1cy Yellow-legged Gull made a nice change, though there were no Casps again and I fear the cach streak is well and truly over. There were also three Mediterranean Gulls and upwards of 400 Common Gulls.