Phil Wallace took me out to Abberton Reservoir today to have a go for the Spotted Sandpiper that had been present for a week, or possibly up to a month ago.

We left just after 0700, at sunrise, and headed straight for the reservoir, arriving at 0830, before the visitor centre was open so we had to start making our way around, permit or no permit. At Wigborough Bay, the surprisingly low water level produced surprising numbers of waders; honestly, you would be forgiven for thinking it was an estuary. Over 20 Avocet were present with 30 or 40 Black-tailed Godwits, about the same number of Ruff, 50-100 Dunlin, a Ringed Plover, a handful of Redshank and about 1500 Golden Plover at one point. 3 Goldeneye were noted here. Raptor wise, 1 Kestrel, 1 Common Buzzard and a frustrating possible Hen Harrier were seen.

We walked for about four miles, unnecessarily, before deciding it would be better if we went back to the car, went to the visitor centre, got a permit and drove around to the other side, so we did. Along these four miles we saw several Meadow Pipits, c.20 Ringed Plover and several more Goldeneye bringing it up to around 10 in total however there was little else new of note.

We signed in at the visitor centre and drove around to the other side, walking about a kilometre to where the bird was meant to have been frequenting. Surprisingly (or perhaps not, considering the rip-off access to a restricted number of people at a time and the huge and confusing site), there were only two other birders there, on the opposite side of a mini-bay, but we could tell where the bird was from where they were looking. At 2 minutes before mid-day we connected with the SPOTTED SANDPIPER, a lifer for both of us (British tick 261 for me (239 for the year)).

After watching it for a few minutes, we attempted to walk closer and around the other side of it in order to get closer views in better light. I heard the bird give the characteristic Common Sandpiper-like (but more drawn out) call and knew it had flown, but when I looked it was still there. I looked again shortly afterwards and it wasn't. We got to the other birders and they said it had flown around the corner. We waited for its return which would happen sooner or later, seeing that where we originally saw it was the only big patch of mud in the area. Another birder appeared and he soon found it just along the shore from us, it must have walked back around and was working it's way back to its favoured feeding spot.

We enjoyed prolonged, good views of it as it fed, occasionally pausing for two or three minutes allowing for a shot before preening, bathing or resuming feeding activities. Then it flew, calling as it went and I managed some reasonable flight shots. It was back where we saw it originally, further away for where we now were. Then a birder came and flushed it. It flew, I got some more shots in flight while it circled before landing near where Phil was stalking and he obtained some brilliant images. It took off abruptly and returned further up the shore again. 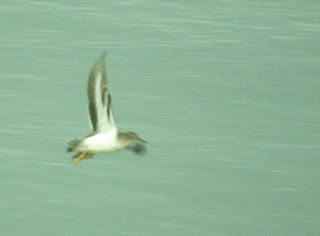 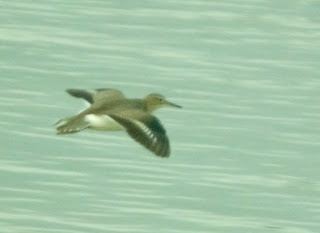 Once more it flew back to it's original spot, disappointingly for me, who was waiting for a shot like Phil's, it at the first spot. Then three birders appeared, disappointingly it didn't fly but worked its way slowly towards me, before it actually did come as close as it did to Phil (showing, better than ever the key features for a 1st winter bird: plain terials, barred coverts, yellow legs and shorter tail) and I got some shots before it flew back further up the shore. Score! I was so thrilled after all that waiting and walking! 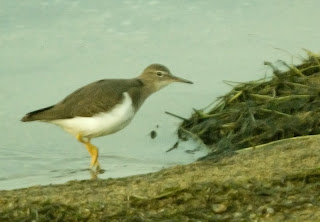 Also seen briefly (too much so for me to judge it's size and structure) was a Bewick's/Whooper Swan. It had the bill pattern of Whooper but 3 Bewick's were reported there that day. . . a Rock Pipit called and a Black Swan added a splash of the exotic.

We headed back to the car and at c.1440 we headed off to Westcliff-on-Sea to get Phil the Ring-billed Gull. We arrived and parked outside the famous ice-cream parlour and within ten minutes the RING-BILLED GULL and a Mediterranean Gull were among the swarms of Black-headed and Common Gulls which came to bread that a gentleman was throwing to them. Excellent views were had of the Ring-billed as it flew feet above our heads and landed on the sea not too far away before flying off (too dark, really, for pics though). A quick ice-cream then it was time to head home after another brilliant day.


By the way, the Firecrests are still at Banstead Downs Golf Course with a recent count of three. Two showed well on Friday. See nuttypatch.