Kent at its best

Today I had a thoroughly enjoyable day out birding with Kevin McManus in Kent.

Our main target was the Zitting Cisticola/Fan-tailed Warbler at Pegwell Bay. After leaving, negative news streamed through on the pager. I had heard the weather would clear up early/mid afternoon so the bird may show then. To kill the time, we made the minor detour of going to see the Shorelark at Swalecliffe.

This bird was a lot easier than I thought. I imagined this being the sort of twitch where you couldn't find the place at all, but driving through a nearby town, along the coastal path, I spotted a small group of birders on a shingle beach. We parked up and got out, soon reaching the other birders and enjoying good views of the Shorelark (year tick 237). It flew. The bird was relocated and we enjoyed even better views for perhaps a half hour or so until a couple of walkers and their dog flushed the bird. It flew up and round and landed pretty close to us, staying still for a few minutes with a great pose, allowing for some good phone-scoped shots. After just less than an hour with the bird, we headed back to the car just after 13:00 and made our way to Pegwell Bay, not expecting much. 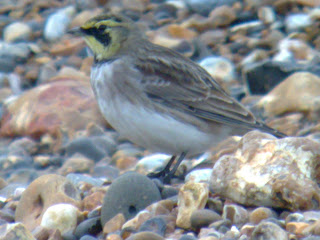 On the way, some positive news came out, as I was semi expecting considering the slightly improved weather. We arrived at Pegwell Bay Country Park at roughly 13:30 and joined the waiting birders behind the hide. Kevin walked slightly further on to get a better angle. Two minutes later . . . 'It's showing!'; we all raced over there and Kevin directed us to the bird which was surprisingly near. I couldn't really get onto it but did see it drop down. This was at roughly 14:00.

We waited again for a while, watching thousands of Golden Plovers fly over-head until I eventually got onto the bird in flight, and everybody else did too. It landed, showing reasonably well, for ten seconds at the most, some of which I had it in the scope, before it dropped down into the grass. Yes! Zitting Cisticola firmly in the bag now and after all this time of trying to go for it! We walked back to the car, very happy and warmed ourselves up after waiting there for over an hour (though it seemed a lot longer).

Sorry but the Cisticola was too brief for pics. There's plenty others on the web though.

This was a thoroughly enjoyable day with 100% success rate.