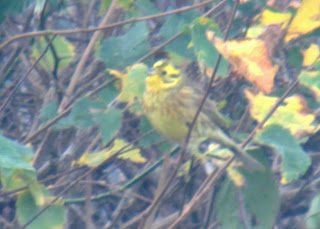 Once again Kevin and I decided to go to Canon's Farm this Saturday in the hope of locating at least one out of Yellowhammer, Brambling, Marsh Tit and Lesser Spotted Woodpecker. The weather was much better than on my last couple of visits and as a result more birds were seen. We finally pinned down c.15 Yellowhammers, which definitely brightened the day up no end.

Without knowing, and without any intention, we somehow achieved a record site count of c.300 Linnets, (flocks of c.70, c.130 and c.100). Also seen were 3 Redpolls overhead, presumably Lesser. A Bullfinch was heard and c.40 and 20+ Fieldfares and Redwings respectively were seen. 20-30 Stock Doves were amongst the regular flock of Feral Pigeons. In the more wooded areas we noted 2 Coal Tits and 2 Nuthatches which are always a bit of a treat; also a Great Spotted Woodpecker here.

2 Kestrels were hunting and one found herself with 50 or so Linnets on her back when she flew across one of the fields that they were feeding in. c.15 Skylark chased each other around and 10+ of both Chaffinch and House Sparrow were around.

We bumped into Steve Gale, it was a pleasant surprise to meet him for the first time after being in contact with him on and off for a year or so.

I am really getting into Canon's Farm now and have now just about gained a reasonable overall, broad idea of the site and its birds. It was interesting to learn from Steve that the woods where the farmers go to hide and shoot can hold c.20 Woodcocks at times!

I will definitely be making more regular visits.