A rare bird at last

After an anxious wait of a week, Phil Wallace kindly took me down to The Fleet near Langton Herring to see the drake Bufflehead.

We left at 7.00am at arrived on-site at something around 10.00am. We joined the gathering of people and after a bit of scanning I picked up the glorious adult drake BUFFLEHEAD amongst a group of Red-breasted Mergansers. My first BB rarity of the year, and the species still constitutes a mega, this being the 14th British record, and the first for nearly 3 years.The bird was tiny in comparison to the nearby Mergansers and dived very frequently, making it difficult to photograph. A Common Buzzard flew over and it stayed up, keeping an eye on it, this was the main opportunity for photography. Other birds in the area included a Chiffchaff, a male Pheasant and a couple of Skylarks. 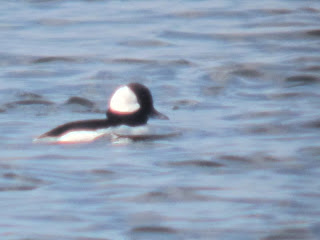 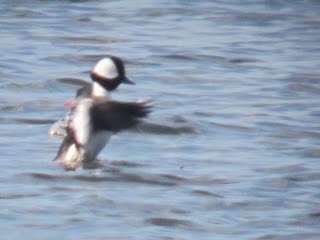 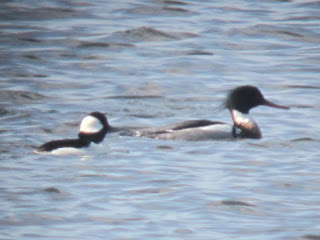 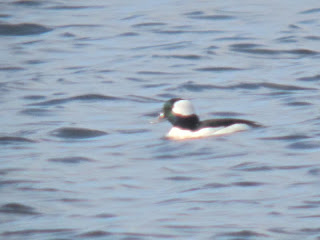 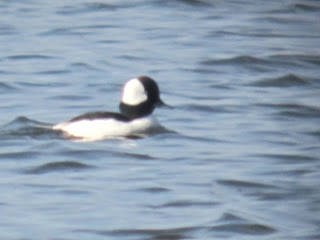 Such a smart little duck - all handheld digiscoped 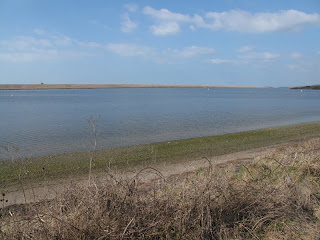 The Fleet - a lagoon sheltered by an impressive shingle bar

After watching this cracking bird for half about an hour we moved on to Burley, New Forest, where a wintering Great Grey Shrike had set up territory. The directions on the pager as 'behind the car park' were a bit vague, as this could be taken to mean the suitable habitat in just about any direction and, although implying its fairly close to the car park, it could mean it was a slightly greater distance away than thought. Alas, we failed to find the Shrike after a good go, but we did see 2 Peregrines harassing one of the pair of Common Buzzards that was in the area (we'd seen quite a few of the latter between sites, from the car). The only other raptor was a Sparrowhawk that came in low and fast. A Redpoll flew over, a Bullfinch or two was knocking around and a Meadow Pipit was displaying. A male Stonechat was present on some gourse south west of the car park.

Next on the iternary was Acres Down, a wonderful viewpoint with stunning views over the New Forest. We were hoping for Goshawk but it was getting late in the day and it was starting to cloud over a bit. I got onto a distant Common Crossbill atop a conifer and soon afterwards, another flew over. Siskins were all over the place and a Meadow Pipit and a pair of Stonechats were present. We failed to see any Goshawks, or any other raptors for that matter with the exception of 5 Common Buzzards, 2 of which were displaying.
On the way back to the car, a Chiffchaff called. We decided to head over to Blackwater Arboretum for Hawfinches. On arrival, under the huge pines and deciduous trees, we both bought a much needed flake 99 before walking through the gate to where the finches get. I was onto a Hawfinch before we were even through the gate, giving its familiar clicking and rasping noises before revealing itself as it flew off. 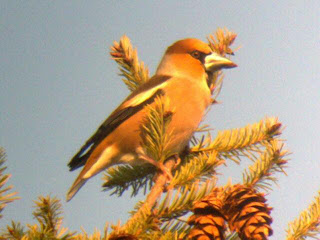 We stayed for about an hour enjoying, at times, excellent views of at least 5 Hawfinches. They were pretty mobile, but stayed put long enough to get photos and show other people through the scope. The place was absolutely brimming with Siskins and there were also some Redpolls around, as well as a handful of Greenfinches. A female Sparrowhawk dashed through, disturbing everything for a short time.

We were about to leave when the Great Grey Shrike came through on the pager again. We couldn't not have another go before dark, so popped back to Burley. We had a thorough look all around the car park again as dusk grew nearer but the Shrike could not be found.

We left happy, Phil had got better photos of the Bufflehead than on his Monday trip and some good shots of the Hawfinches (which he only saw very briefly on Monday) as well as getting Bullfinch out of the way for the year. I was very happy with a good British tick, and a couple of enjoyable year ticks- Crossbill and Hawfinch - (though I'm not really year listing this year). Thanks Phil for the great day out!