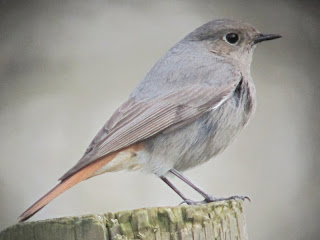 It was a fairly quiet day today at Canons Farm until I checked a field that I hardly ever watch and found a female Black Redstart on the adjacent farm buildings.

I ran back to where Kevin was calmly drinking his coffee, shouting 'Black Redstart!', he shot up, dropping everything, and we legged it back to the buildings. It was still there, atop the roof of a barn, we watched it for a little while before Kevin said he was sure there were two birds. Sure enough, two female Black Redstarts were showing for us at the same time!

We enjoyed views of the birds that got better by the minute, rang Mark Stanley and Steve Gale who both arrived on the scene quickly and put it out on the pager which resulted in at least five other local birders coming and enjoying the birds. 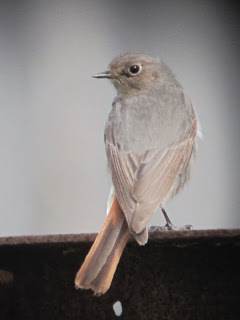 This is the first record of the species for Canons Farm and Banstead Woods and a Surrey tick for a couple of the others.