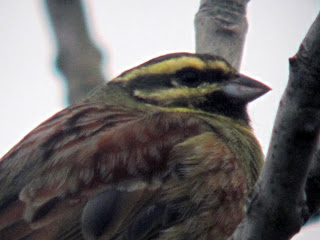 I spent Saturday and Sunday nights near Tiverton, Devon, with my parents this weekend, seeing friends and trying to mop up a couple of British ticks.

Arriving Saturday afternoon, I straight away went on a brief walk along the river near the B&B, hoping to get Dipper. Alas, I didn't succeed but I did find a couple of Mallard broods. One brood of 11 appeared abandoned. At our friends' house that evening, a single Swallow flew over.

I was up early Sunday morning for another attempt at Dipper. The apparently abandoned Mallard brood had dropped in number to 8 and I found one dead duckling on the bank. A pair of Ravens flew low over a field higher up the valley. A Kingfisher dashed past while a Grey Wagtail was feeding on rocks at the weir. After a while staking out the weir I got onto a Dipper as it dashed past, not very satisfying, I really wanted better views. A Swallow and a Common Buzzard were also present amongst other things.

I recommended Dawlish Warren as a great outing for all and I immediately sloped off up the spit to scan the sea for the female Surf Scoter. I scanned and scanned from all angles, picking up a few yearticks but not the Scoter in question. I was dragged back by the others after a couple of hours to pretend to enjoy the amusements while I was longing to go back and desperately scan some more. The trip to Dawlish ended tragically when 'positive' news came through on the pager just as we were leaving - and there was no turning back - we had to meet the others at Labrador Bay. Yearticks here were Fulmar, Common Scoter and Shag. Gannet and Red-breasted Merganser were also seen. 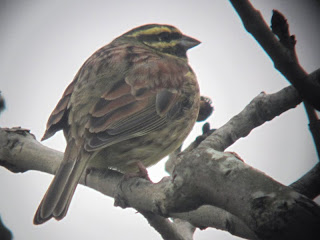 I grumpily walked around a couple of steep fields at Labrador Bay. It was pretty dead, not many birds could be seen or heard. I was on the verge of giving up when I heard the unmistakable rattling song of a Cirl Bunting, and another one nearby, phew. After a bit of waiting, I eventually got very, very good views of one of the singing males (which was at an area of cleared woodland). A nice and much-needed British tick, thanks to Joe Ray for the site recommendation.
After having dinner with the friends at a nice carvery, we drove up to the edge of Exmoor and enjoyed excellent views over the stunning area at dusk, dodging Pheasants on the way. 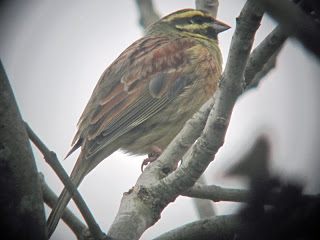 Early Monday morning saw me seeking better views of Dipper. The Mallard brood had disappeared. A Grey Wagtail was feeding on the rocks, a Kingfisher piped away but passed unseen and after a while watching the weir I lifted my binoculars to enjoy good views of a feeding Dipper! I managed a poor digi-binned record shot. I haven't seen this species since I spent two weeks in Wales in 2007. A very pale Common Buzzard flew low overheard in excellent light and set 2 Swallows off on one. 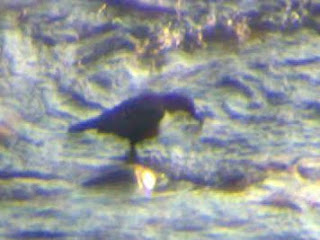 Dad took me to Dawlish again in the morning for another desperate stab at the Surf Scoter and I again failed miserably, seeing only Shag, Red-breasted Merganser, Common Scoter etc. The tide being out again probably didn't help, as well as the sun being directly in front of me and there being a fair bit of heat haze over the unsettled sea. We went to see our friends one last time, seeing a Sparrowhawk on the way. Sitting in their garden another Sparrowhawk unsettled the many House Sparrows and a couple of Swallows flew over.

The journey back saw even more Common Buzzards (a species I saw an awful lot of during the trip) and a Red Kite that dad skillfully picked out over the M4 (yeartick).