Having retrospectively unticked the Norfolk River Warbler because I decided definite views of the bird on Monday were so awful (glimpsing it with the naked eye as it flew from one singing position to another) and further sightings that evening could not be reliably confirmed, I immediately suggested Norfolk when dad asked if we'd like to go somewhere for a night this weekend (10th-11th). Saturday evening saw me with up to 100 others enjoying excellent views of the singing male RIVER WARBLER, very satisfying (see video)!

I thought we'd have to return the next morning because the bird did not sing until about 9.20pm but around that time it suddenly burst into song and showed rather well for quite a while before it found a slightly more discrete perch from which to sing and it's head was just about visible as darkness grew. A Barn Owl, a Kingfisher, a Hobby and a Sparrowhawk all provided something to watch while we waited for the main attraction. 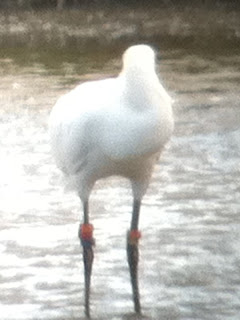 Sunday morning we headed to Titchwell after breakfast and I scanned the freshmarsh for the Buff-breasted Sandpiper which I missed by about ten minutes (again!) while my parents appreciated the Spoonbill from the hide. A Pectoral Sandpiper gave good views onn and off while I was searching for the main Sandpiper of interest. Scanning revealed a Spotted Redshank, many Ruff, Avocet, Dunlin, Black-tailed Godwits, Redshanks and a couple of Greenshanks but no Buff-breasted. 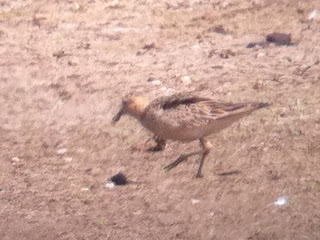 After a good couple of hours or so searching I was getting fed up and went to the cafe to have a snack, planning to then go to Swanton Novers for a while before returning for another look for the Buff-breasted. Just as we were about to leave the pager bleeped, the Sandpiper re-appeared - I dashed out and back up to the freshmarsh to be greeted with 'It's not showing at the moment', my heart sank; surely not for a third time!? Then another voice said 'The Buff-breasted? Yes it is, have a look over there!', to my relief it was the Buff-breasted Sandpiper and not a Ruff (which had been called as the bird before), my 277th British bird. It showed well until I left for Swanton at 2.00pm. 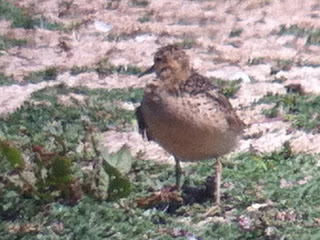 Swanton didn't provide the desired Honey-buzzards but up to 5 Common Buzzards and a Sparrowhawk were seen along with a couple of Yellowhammers. I wasn't really expecting to see any Honeys and was very happy with the weekend's haul.