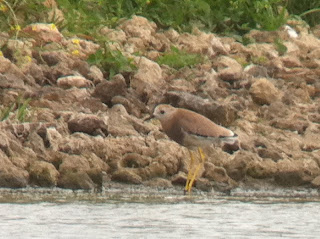 I reluctanly awoke at 11.30am this morning to answer an annoying phone call but if I didn't I might not have made it up in time to see this montrously mega bird for London, so thank you Santander!

Turning my mobile on the first thing that flashed up on the screen was 'London WHITE-TAILED LAPWING Rainham Marshes: one on Aveley Pool at 10:57 this am' and being half asleep I closed it before thinking 'hang on, what did that say?' looking again and saying 'oh ****' I proceeded to text just about every local birder I knew but everybody was either at work or already on their way so I logged onto National Rail, planned my route, picked up bins and scope and was off. The journey was relatively simple; Sutton to Farringdon where I walked to Fenchurch Street and took the train to Purfleet where the RSPB visitor centre was a ten minute walk away; it still took at least two hours though. 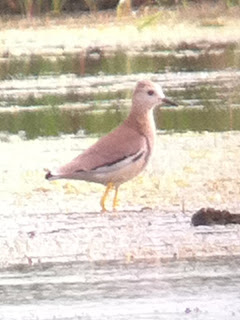 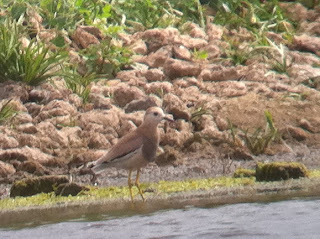 On arrival I rushed through the visitor centre and headed straight for Aveley Pools, and got onto the WHITE-TAILED LAPWING lying flat on the bank almost exactly where I saw the Sociable Lapwing nearly five years ago. It stayed like this for ten minutes or so and I have to say views of just its brown back against a brown background weren't too great but then the bird stood up and started feeding, stretching its wings from time to time; it was then that the bird looked really impressive, a real stunner and it wasn't terribly far away either. Those long bright yellow legs, white tail & underparts, pale brown upperparts, paler face and white secondaries & primary coverts as well as the very short primary projection combined to make the bird a very attractive and interesting one to watch. 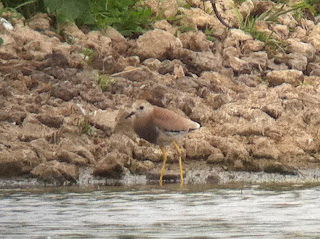 After enjoying the bird for about an hour it was time to make my way back to the visitor centre if I were to have a snack there before heading home, as I was beginning to leave my dad rang up to ask if I'd like to spend a bit more time there and he'd pick me up at 7.30pm; I accepted and walked the seawall, scanning the Thames and picking up a Whimbrel, an adult Yellow-legged Gull and 2 Oystercatchers which provided some nice bonus birds. 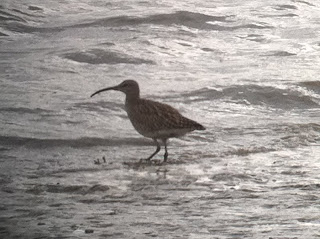 I spent the next hour enjoying second helpings of the Lapwing which was a bit more elusive than earlier but still afforded good views. Other birds on Aveley Pools included a Greenshank, a juvenile Water Rail, a Green Sandpiper, 2 Common Sandpipers and two or so Little Ringed Plovers. I headed back to wait ages for dad to pick me up, he was was late because of the same traffic which caused us to have to endure a five hour journey back; one which would normally take 45 minutes to an hour. A very worthwile trip, White-tailed Lapwing for London, what a bird!