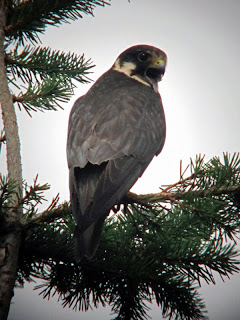 Hobby
Got to the local patch at about 6.40am this morning and put in about six hours, which did not reward me with anything new but I never tire of seeing that gorious Hobby! After satisfying myself that I'd checked the patch about as closely as possible, walking about 10 kilometres in the process, I started to make my way to Regent's Park via public transport for the Pied Flycatcher that had been reported. 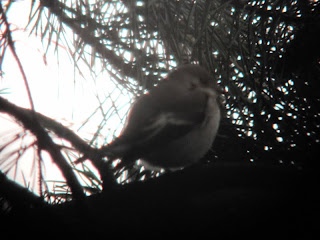 Pied Flycatcher (see Tony's blog for much better shots)
When on site, I could not find this 'enclosure north east of the lake' and got pretty frustrated but I found it in the end and was greeted by the very welcoming Tony Duckett and a couple of others; it wasn't long before I was enjoying reasonably good views of my first London Pied Flycatcher, bringing me into the single figure countdown to 200 for the area.

The spot looked great for migrants and, as well as the Flycatcher, about three Willow Warblers and a single Common Whitethroat showed themselves for me and Tony said he'd seen a Garden Warbler in there too. Not a bad day. 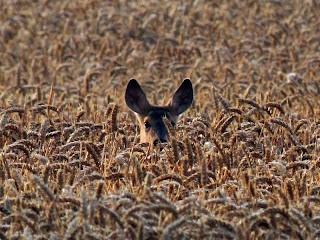 Thought this was quite a nice scene at the patch, I wish I moved a bit left to get that piece of wheat out of the way of its left eye though . . .