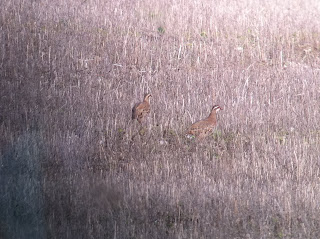 After several attempts at nailing Red-legged Partridge for London/Surrey/local area at Epsom Downs I finally bagged a couple of birds on Sunday. This time Steve Gale told me exactly where was best to find the partridges, this happened to be exactly where I've focussed my efforts several times before but it seems he gave me some luck on Sunday. This is my 198th bird for London and 156th for my local area.

The patch hasn't been too bad in the last week with a 1st winter male Common Redstart with a very suspicious-looking pale secondary panel (didn't have time or knowledge/material at time to fully scrutinise), a flock of six Golden Plovers, countless Siskins (21+ one day) as well as singles of Brambling, Lesser Redpoll, Yellow Wagtail, Stonechat and Northern Wheatear. I'm still looking for a patch tick though.

In more negative news, I have had to remove one species from my British list as the Bonelli's Warbler in Norfolk is reported to have called both as Western and Eastern so it cannot be assigned to species. Bugger.