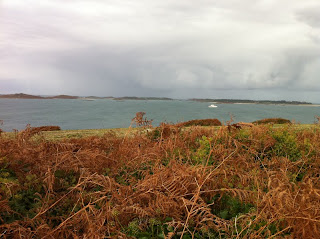 I returned to the wonderful Isles of Scilly in October half term, the last week of the month, hopeful that I would get a handful of lifers. I went with my parents again (although I stayed separately to them and they only saw me in the mornings for breakfast!) and we stayed in Penzance Sunday night before getting the Scillonion on Monday morning. Funnily enough the journey down there provided arguably the best bird of the entire trip, American Golden Plover, a British tick for me, at Exminster. You probably know by now that I didn't see many rare birds . . . 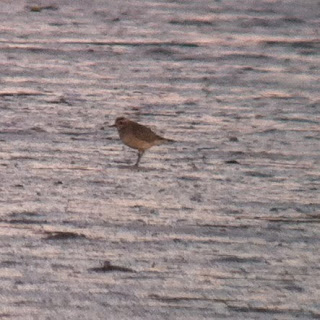 After a very birdless crossing I phoned 'Spider' the cab driver (a character who would become familiar throughout the rest of the week) up and he dropped me at Green Farm where I met Phil Wallace who was looking for a Serin. I half heartedly looked for about twenty minutes before walking over to the Subalpine Warbler site, a would-be lifer for me.

There were only a couple of other birders looking, after a while one called us over. He had just had the bird and I'd missed it by moments, dang. I staked the site out with a varying number of birders including Pete and Jamie (birders I met on the ferry who would again become familiar characters) as well as Rob Stokes until dusk. At one point I was told I had flushed the bird by accident! I had no luck and planned on returning but this never worked out and no-one saw the bird again. Interest was added with fly-over Serin (presumably the Green Farm bird) and Lapland Bunting (both of which I picked out myself). 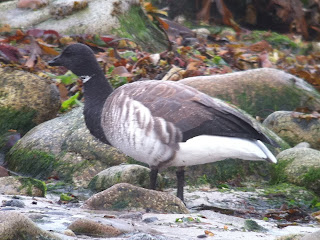 Pale-bellied Brent Goose
After breakfast I went for a walk with Phil Wallace around St Mary's. Porthloo rendered three Pale-bellied Brent Geese, a Bar-tailed Godwit, two Sanderling, 14 Ringed Plovers and a Curlew . . . not an awful start. Content Farm was busy with birds, the best of which being two female/1st winter Black Redstarts. 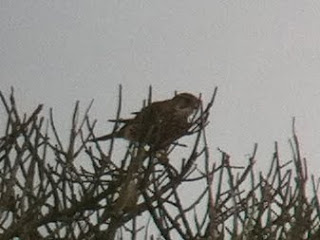 Merlin
Following reports of an accipiter that sounded good for Sharp-shinned Hawk Phil and I headed to Newford Duck Pond which gave a good view over some fields in the general area that the bird had been frequenting. A Brambling flew over and Phil asked me to play him the call so that he could familiarise himself with it. In doing so I looked down at my phone and missed the bird - Phil and everyone else got it - sh*t. A theme of stake-outs seemed to emerge as I stayed till nearly dusk, with no further sign of the bird and one or two Merlins, a Raven, the odd Sparrowhawk and a late Swallow to keep me entertained. 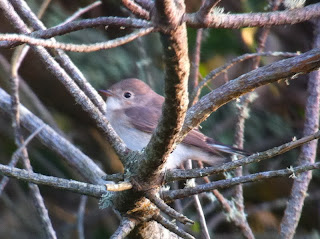 News then broke of a Dusky Warbler at Holy Vale, I forgot I'd already seen one and reacted as if I needed it so rushed off with Phil straight away (remembering half way there that I'd seen one in London!). The news on arrival wasn't good but soon the bird was relocated and I got some great views as it called. It then flew to some bracken in an adjacent field and two birders thoughtlessly went in after it, causing the bird to fly quite some distance away. Thankfully, it returned and more excellent views of it were had by all and the bird remains the day I write this.

There was a Spotted Sandpiper on St Agnes and I wanted to see this but a message came through on the pager regarding a possible Hume's Yellow-browed Warbler on Tresco. Decision time. In the end I decided to go for the one that would be a lifer and headed to Tresco. Shortly after arriving I bumped into the birder who had found the bird and he showed me a photograph of what looked like a Yellow-browed Warbler to me, I was plucking up the courage to say something when a message came through on the pager saying that the bird was a Yellow-browed. The birder apologised for wasting my time and I told him he did the best thing as it could have turned out to have been a Hume's. It wasn't a wasted trip anyway as I got good views of the bird in question, my first Yellow-browed Warbler of the year and saw my first Siberian Chiffchaff as well as a good number of Little Egrets.

Spider gave Phil, Pete, Jamie and I a lift to Trenoweth where he kindly arranged access to some private fields for us to search for the possible Sharp-shinned Hawk. We searched for a couple of hours but got nothing. Spider picked us up at 9.45am and dropped us at the quay, Pete and Jamie successfully got onto their Tresco boat but the St Agnes boat was full and could not take Phil and I. We got Spider to return us to Trenoweth but we failed to see the bird it was quite cool seeing a female Merlin take a Chaffinch though. 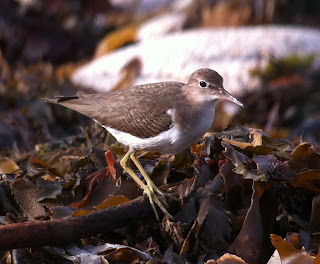 Spotted Sandpiper
We caught the 2.00pm boat to St Agnes and got excellent views of the SPOTTED SANDPIPER but not a lot else. It was a transfixing bird though and showed absolutely exquisitely! Easily one of the highlights of the trip. A male Peregrine was seen flying towards Gugh just before the return boat arrived. 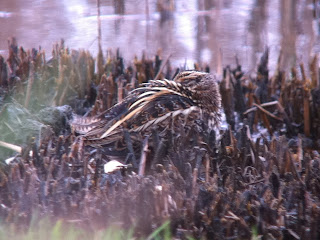 Jack Snipe
Supposedly our last full day, not a lot happened. Good views of the Red-breasted Flycatcher were had on the Garrison where a Peregrine dropped into the pines and two Stonechats knocked about. I heard a Firecrest at Carreg Dhu gardens. Good views were had of a slumbering Jack Snipe at Porth Hellick where I got good views of another Firecrest. I had another look for the Dusky Warbler approaching dusk but didn't see it, instead getting good views of a Yellow-browed Warbler. Common Scoter and Red-breasted Merganser in Porthcressa Bay were Scilly ticks for me. 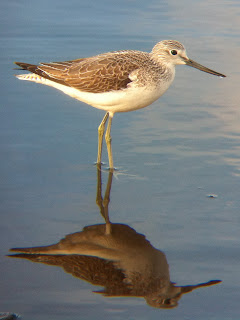 Greenshank
I wandered over to Old Town with Phil in the morning. Opposite Nowhere Cottage we got good views of a Firecrest and I picked up the Red-breasted Merganser as it circled the bay before flying off around Penninis Head towards Porthcressa where it was the previous evening. At Lower Moors we got uber views of a Greenshank and heard a Yellow-browed Warbler. The Dusky Warbler was again enjoyed at the southern entrance to Holy Vale. Our boat was due to leave for Penzance that afternoon but it was cancelled and all flights were full meaning that we were forced to stay an extra night . . .


. . . so I spent the rest of the day on the Garrison where I saw an acrocephalus warbler that James Bloor-Griffiths had found the previous day and I had failed to connect with. I phoned Phil, who was around the corner photographing Goldcrests, immediately and told him to get the hell over there so that he could photograph it. Moments that seemed like hours passed and the bird worked its way further away. I started to panic, James has seen Blyth's Reed on Scilly and in India before and said he was 100% sure the bird was one the previous day. In my shaken state I tried to get as many features as I could on it in between shouting like no-one has ever heard me shout before like a mad man, ordering Phil to get the **** over there! Just as I lost the bird to view Phil appeared casually around the corner. The features I got on the bird were: grey legs, relatively short primary projection, cold tones above and 'bowl' shaped posture. We did not see the bird again and I was frankly more than very pissed off that Phil didn't drop everything and run (if he had done he would have undoubtedly photographed it) - I would have if I was him . . . it would have been very exciting to be part of the clinching of a BB rarity and a lifer for both of us. Sorry Phil, but you said yourself you knew I'd go on about it on the blog ;-) Goldcrests or Blyth's Reed!?!? I know it's difficult to drop lots of equipment especially when you're in the middle of photographing something, sorry for getting so mad at the time Phil :-) 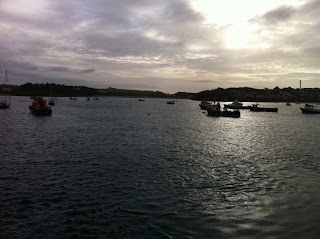 I was on the Garrison with Phil just after first light and we did not see the acro again and we had to get on the boat at 8.00am, I was completely gutted as clinching that warbler would have made the trip for me. We bode farewell to the lovely Red-breasted Flycatcher just before we went down to the key and I proceeded to over react and complain for about an hour about what I perceived as Phil's apparent lack of any sense of urgency. The crossing back provided 3 Bonxies. Phil and Josh Jenkins Shaw joined my parents and I on the drive back home and we stopped off at the American Bittern, which we badly dipped and the American Golden Plover again at Exminster, with which we connected as it fed with Grey Plovers.

one lifer - a poor showing but it was a nice bird however two very good back up birds with a nice supporting cast as well as the islands just being fantastic anyway made the trip worthwhile. Thankfull the hawk that I never connected with turned out to be a freaky Sparrowhawk!