The redpoll flock at Banstead Woods has been a real bugger. You are walking through the woods and suddenly you realise you've flushed the flock that would have been on full view for you had you taken more care. Most of the time they will completely clear off, sometimes they will land again nearby but very shortly get jittery and go entirely. I have had the flock over a radius of at least one mile and, as there is a scattering of birch all over the patch, they can be anywhere.

Yesterday I finally nailed a Mealy. The flock was on show in good light near the pond and after scanning through a few dozen I came across a strikingly pale and grey bird with white wing bars etc, the lot, and got a couple of views of its rump. A video is included.

While I was watching the flock a male Tawny Owl started to sing, confirming that it is regular at the spot that Roy and I heard it recently.

Today I had a male Brambling again with about two hundred Chaffinches. I teamed up with Kojak and, when we were looking for the Tawny Owl, a Woodcock emerged from under our feet. All five known current Little Owls were noted today, two pairs and a single that may or may not have a mate. Frustrating was a Lesser Spotted Woodpecker that I heard at Pages Acre but just couldn't get on; there were three Great Spotted Woodpeckers in the immediate area and they may have moved it on.

Knot what I was expecting 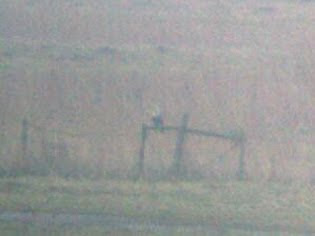 I stayed the night of the 21st/22nd in Dersingham with Phil Wallace and Mark Stanley. Phil wanted to photograph the huge numbers of Knot at Snettisham. While this is not something that I would go out of my way to do, I figured it would be an opportunity to get Rough-legged Buzzard and/or Golden Pheasant later in the day (plus I wouldn't say no to seeing thousands of roosting waders) so thought it would be worth coming.

Snettisham didn't start well, I realised I had left my binoculars in the car so had to run back and it was spitting with rain. Arriving shortly before high tide, not many waders were flying over our heads so we went into the hides to see thousands of Knot and Oystercatcher along with a Ruddy Shelduck and about thirty Avocets and a redhead Red-breasted Merganser. To be honest I was underwhelmed with the waders, from what I had seen on TV etc I was expecting endless flocks to be arriving and adding to an unbroken and extensive carpet of birds. Instead, there were at least 15,000 Knot tightly packed and covering a small part of the bank. While this sounds a lot, it is half the number Phil saw last year and looked suitably unimpressive, somehow.

Mark and Phil then seemed to decide we were going to Titchwell, so off we went. A Barn Owl was seen on the way. About forty Twite were nice to see as was a Red-necked Grebe close-in on the sea. Several hundred Common Scoters were on the sea but I was far more surprised to see a raft of about fifty Eider. Two Grey Partridges showed well.

At 4.00pm, with just an hour of light left, we finally headed to Holkham, the main reason why I came. At this point I was getting quite irate that the reason for my presence had been left so late. We pulled up by the side of the road were a group of birders where trying to turn a Common Buzzard into a Rough-leg. I told them politely that it wasn't what they thought it was but they weren't getting it until I spotted a distant bird and stated 'Now that is a Rough-leg'. I've been looking for these birds so many times and familiarised myself with them to such a degree that identification wasn't a problem. The bird was very pale on the head and chest and had a solid black belly. When it preened or flew the white tail with a wide, well-defined terminal tail band, was obvious. A Grey Partridge showed here, also.

Provided that everything I've seen gets accepted (Alder Flycatcher and Glaucous-winged Gull are probably the most risky), this would be my 300th bird. It's frustrating that my 300th bird could be one of three and I won't know which it is at the time. Oh well. It was very nice to get Rough-leg in the bag after so many hours spent looking for them in the past. Thanks Phil and Mark for the company. 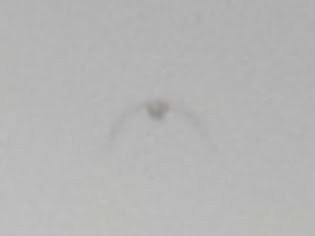 Following the recent Stonechat, further signs of early movement were noted at the patch today. The highlight was a single Curlew that dropped into Broad Field, calling, and departed a few minutes later, still strongly calling (second site record, following my flock of six in December). Of course, the day I don't bring my SLR because it has finally refused to work at all, a patch mega flies past me less than one hundred metres away . . . (see extremely poor 'point and hope' digiscoped flight shot above)

Also a couple of Meadow Pipits went through, the first in quite a while. We usually get at least a couple wintering but not this season. Three Little Owls were located and I had a couple of male Bramblings in the morning with about four hundred Chaffinches, not far away from Norm the Common Buzzard who was busy eating worms, I haven't seen his associate Whitey in a while. Johnny Allan and Paul Goodman joined me in search of the big flock of Redpolls I had yesterday but we only located fifteen or so, they got two of the Little Owls though.

Hopefully it won't be too long until we get a Black Redstart, or, preferably for me, a Firecrest (still need it for CFBW). 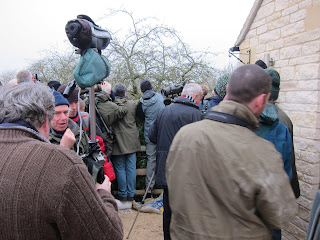 Johnny Allan picked me up this morning and we headed for Chipping Norton, with the intent of catching the dove early in the morning. First news was offputting, with the bird having appeared briefly then flown off, but just after a fairly major navigational cock-up on our part it was said to be showing in the garden and access had been arranged at number 41.

On arrival the situation was unclear, people were saying that the bird was still in the garden but everyone was just casually floating around and no queue was forming. The word then got out that it was viewable from a garden not far away, where access had also been allowed, and I got a quick look at the RUFOUS TURTLE DOVE through someone's scope, however it was an anxious wait for better views. Johnny then picked it up and, after a long time looking in the wrong direction and a bit of pushing and shoving, I got much better and longer views of the bird sat right out in the open. Top stuff. We then made our way back and I'm now enjoying a lazy afternoon in.

Good bird in a bad week 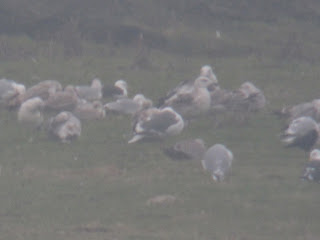 I've had an absolutely awful week, in quite a serious way. Today a SLATY-BACKED GULL took my mind off things for a while, until I reached for my phone to give Roy an update and found it must have fallen out of my pocket when I was running in blind panic when the pager bleeped (I had started to walk towards the reserve for Penduline Tit). After the week's ordeals I was getting hysterical, half laughing and half crying but after searching high and low I realised the best thing to do would be to savour the only good thing that had happened to me all week. Then went with Kojak to have a go at the Rufous Turtle Dove, he was excellent company but the bird was nowhere to be found.

I was in Banstead Woods when Ian Jones, a relatively new CFBW patcher, texted me about a Stonechat at Canons Farm. Seeing as this was the most exciting thing to happen there all year - even better than when the farmer dumped huge piles of sh*t in two of the fields and left them there to rot, the previous 2011 title holder for patch thrills - I hot footed it over there and enjoyed the symbol of the early stages of spring migration: 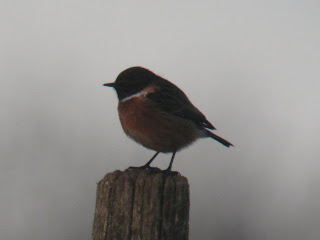