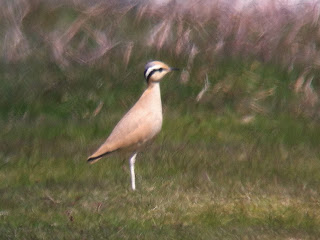 I was holding out on the Cream-coloured Courser still being present today, not being able to get there yesterday due to the inconsiderate timing of an AS-level Biology exam. I'm known (particularly by my family) for having scewed priorities but a proper exam is one of the few things that I can't really justify missing in order to see a bird.

The plan was to leave on news. I started the day early at Canons Farm where the Red-legged Partridge was showing, allowing Paul Goodman to finally get it - his 93rd CFBW bird. Ian rang me to say that someone had posted the continued presence of our quarry on Birdforum, so I called our chaffeur for the day who I am restricted to naming 'The Invisible Man of Northern Surrey' and we left within the hour, along with Paul Manville. The journey was a real pain in the arse (...literally) but we got there in the end. Thankfully the ascent to the summit wasn't as long as I expected and after crossing an assault course of moody golfers on Ladies' Day, we reached the gathering and there it was, a bird I almost thought I'd never see, the absolutely blinding CREAM-COLOURED COURSER. Weird, wonderful and rare this is one bird which all the typical birding adjectives truly apply to. It was feeding away happily along the edge of the bracken-lined fairway and came reasonably close at times but regular passing golfers made sure it never completed a full approach. After watching the bird for a couple of hours, eyes glued to our lenses, we had to leave. On the way back home we payed a quick visit to Jubilee River to try to see the Red-footed Falcon (which Ian and Paul needed for their British lists) but it didn't look like it was going to happen but nobody really cared - the buzz from that courser will last me out a long time!


News of a Spotted Flycatcher at Canons Farm was teasing me on the journey back - I gave it a quick go in the evening but, as expected, dipped.

I truly cannot think of another rarity/scarcity in Britain I've twitched (hence ruling out the flock of Dotterels at Canons Farm) that I've enjoyed seeing as much as this bird, little comes close. I guess Northern Waterthrush and White-tailed Lapwing are the nearest contenders but not a touch on this thing!